Share Your Info and Ask Questions - Thomas Doran in Texas

Here's another example of how taking a little bit of information you've found and sharing it with others can reap huge rewards in more information.

A couple of years ago, during my last trip to Carthage, Hancock County, Illinois, I had stumbled upon records of service in the Civil War for a Thomas Doran who would have been born in about 1843. He was listed as a musician in the Illinois 16th US Infantry. I knew this couldn't be my great-grandfather as he wasn't born until about 1853. He was also too young to be his father.


On this same trip, I had discovered the probate papers for a Thomas Doran in the Hancock County courthouse. He had died in 1876. These papers listed his children as Thomas, now of Texas, Fanny Neason, Margaret Reilly and Nancy Dunnigan.
A second cousin of mine sent me information about a Thomas Doran that lived in Kimble County, Texas. The story can be found here: http://www.carsonsofbrazoscounty.org/?page_id=285 but I'll include the part that is associated with Thomas Doran:

The story talks about James Deaton, living in Junction, Kimble County, Texas in 1876.

"Junction at this time was the edge of the frontier and was a haven for bandits, as noted by Walter Prescott Webb in his book “The Texas Rangers”. By this time, James Deaton was a wealthy young man. At the age of 28, the tax rolls indicate that he had 12 horses worth $300 and 200 head of cattle worth $800. As his father Thomas as also a wealthy man, James may have inherited some of this property..."

Tom Doran, who killed him, was the defendant in the first murder case tried in Kimble County. It is now impossible to know what really happened. It is known that his daughter Hattie always told her children that her father had been shot in the back. Others say it was self defense. In 1937, Junction resident O.C. Fisher, later to become a prominent United States Congressman, published “It Occurred in Kimble”, one of the first efforts at oral history undertaken in the United States. His book includes a description of the Tom Doran and Jim Deaton incident. It reads:

Early in 1880, Jim Deaton tried to kill Tom Doran when they met at Bill Frank’s saloon. Doran sat in the saloon leaning his chair against the bar when Deaton, with an open knife in his hand, entered and paced to and fro in front of Doran. Suddenly, as he passed, Jim whipped the knife blade against Doran’s throat. Doran ducked, the blade slashing at the under edge of his chin. Doran then raised his head and the flesh under his chin dropped down like an apron (as someone who helped sew him up put it). Deaton had drawn blood and the feud between the two was not settled. Everybody in Junction City knew that there would be more trouble. Six months later they met just outside of the same saloon and one word brought on another. Some construction work was being done on the building, and Deaton grabbed a piece of loose lath with which to strike Doran, but the latter shot him with a ‘needle’ gun and killed him on the spot. The feud was ended. There was no trial, remembers one man, as it was a plain case of self defense, and why bother the man with a trial? Trials cost money.

Tom Doran’s preliminary hearing was conducted under an arbor, and during the course of the proceedings, Mrs. John J. Smith, who had been at these proceedings, recalled that Jim Deaton’s widow made a dramatic appearance on the scene. Brandishing a loaded gun, she made her way through the crowd and announced that she wanted to kill that man Doran. Several men relieved her of the weapon, order was finally restored, and the proceedings resumed. (See: Fisher, O.C., “It Occurred in Kimble”, Anson Jones Press, Houston, 1938, pp. 229 – 230).

However, this may not be the full story. O.C. Fisher was conducting an oral history based on the reminiscences of early Junction County pioneers. Certain aspects of his account are not accurate.
For example, he states that this incident occurred early in 1880. However, it did not. fisher says there was no trial. Others say there was an actual trial (see: “Family History Book of Kimble County). Perhaps time had dimmed the memory of whatever pioneer told Fisher the story or, perhaps, the particular pioneer was a friend of Tom Doran or his family. Others in Kimble County believe in a different version. After the killing, Tom Doran fled, which could be an indication of guilt. On 20 Sept., 1878, the following item was reported in the Galveston Texas “Daily News”.

“My husband was killed in this place yesterday by a man by the name of T.H. Doran. My husband’s name was J.M. Deaton. The difficulty occurred in a saloon close by and my husband started home and was followed by Doran who shot him in the back. When my husband was killed, he had nothing to defend himself with, not even a pocket knife. Thomas H. Doran, a man about 38 or 40 years old, has red sandy hair and mustache, blue eyes, about 5 feet 10 inches high, and weighs about 165 pounds. He had a difficulty and had a cheek cut very badly with a knife which will be a good mark to identify him. Please accommodate a poor widow by publishing this description of the murderer of my husband so that he may be caught and published.

It can not be known now whether this is an accurate description of the incident or the recollections of a grieving widow. Note that Susanna Deaton’s letter contains the information about the deep cut that Doran had suffered. The fact is that at least some in Kimble County thought it was necessary to track down Doran. The Galveston Daily News reported on 25 Sept., 1878, the following news:

News Item: James Deaton was shot and killed at Junction City last week by Thomas Doran, a wild character from Travis County. Whiskey, we learned, was the cause. At last accounts, Doran was at large but a party of the good citizens of Kimble County had gone in pursuit.

Doran was eventually apprehended. Since Kimble County did not have a court house, the trial was held in a brush arbor, located now whether the city park in Junction is located. Doran was acquitted. However, on 21 Dec., 1878, Tom Doran himself was killed in a saloon fight in Junction. His killer, Lewis Temple, was a sheriff’s deputy who did not like Doran. Perhaps Temple had been a friend of James Deaton.

No grave stone marks James Deaton’s grave. However, Frederica Burke Wyatt wrote in “Peace in the Valley, A Chronicle of Kimble County Cemeteries”, that James Deaton is without doubt buried in Pioneer Cemetery on the banks of the Llano River within the city limits of present day Junction. Wyatt believes this because it is the only logical place for Deaton to have been buried. These were the words by the author to Stephen Pate, who did the research on James Deaton. Indeed Tom Doran was buried in the same cemetery only three months after Deaton was killed. His grave, however, is marked and is the oldest marked grave in the cemetery."


The question my cousin and I then had was "Is this Thomas Doran from Carthage and is he the brother of Fannie Neason and Nancy Dunnigan?" We had no way of knowing.

On September 18, I received an email from a woman that I believe is my third-cousin. I believe she found me by way of a question I posted in the Hancock County Rootsweb message board. She wanted to know if I knew where in Warsaw my Doran family was buried. Obituaries and probate papers mention that Old Tommy Doran and Nancy Dunnigan were buried in Warsaw but it didn't say which cemetery and no records currently show where they were buried. We've not been able to find a headstone for them. Our email exchange eventually moved on to a discussion of a Civil War widow's pension file for Mrs. Thomas Doran. Her maiden name was Ethelena Lola (Iola?) Hall. I asked if she had copies of these files and she emailed them to me. 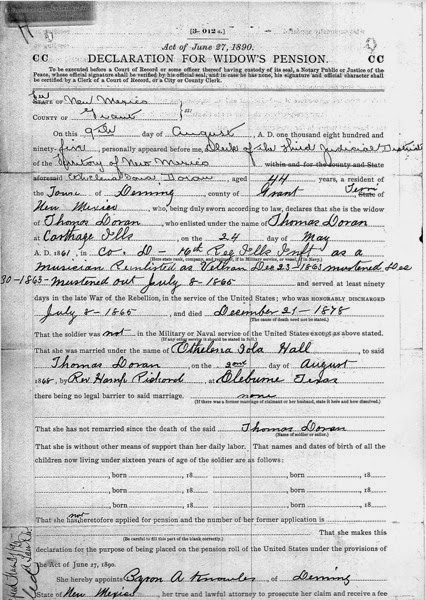 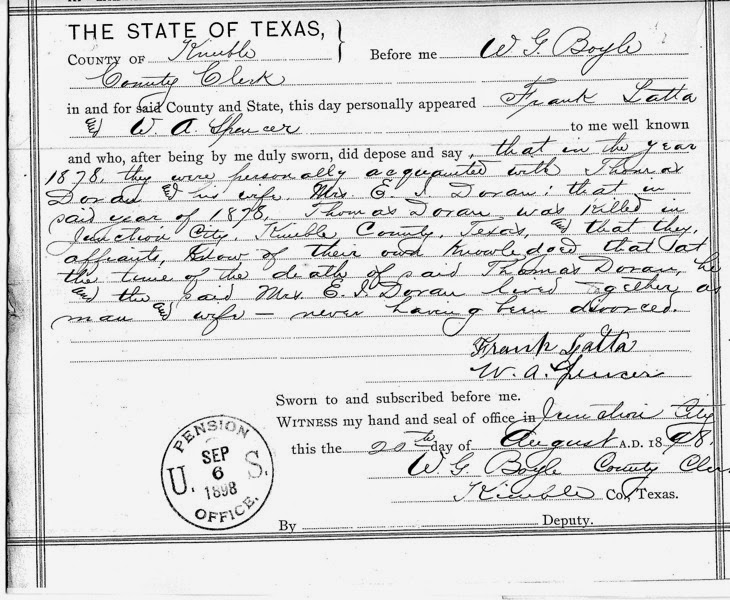 In these documents, I see that they talk about Thomas Doran, who lived for a time in Cleburne, Texas and died in Junction, Kimble County, Texas was born in Ireland but had been from Carthage, Illinois. In addition, one affidavit was submitted by Fanny Neason! 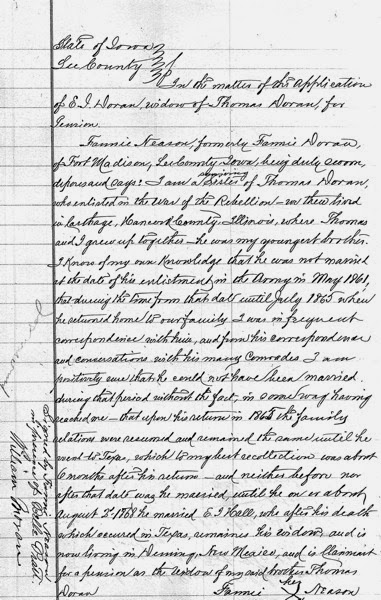 The letter reads:
State of Iowa
Lee County
In the matter of application of E. I. Doran, widow of Thomas Doran, for pension.
Fanny Neason, formerly Fannie Doran, of Fort Madison, Lee County, Iowa, being duly sworn deposed and says" I am a surviving sister of Thomas Doran, who enlisted in the War of the Rebellion who then lived in Carthage, Hancock County, Illinois, where Thomas and I grew up together. He was my youngest brother. I know of my own knowledge that he was not married at the date of his enlistment in the army in May 1861, that during the time from that date until July 1865 when he returned home to our family I was in frequent correspondence with him, and from his correspondence and conversations with his many comrades I am positively sure that he could not have been married during that period without the fact, in some way having reached me, that upon his return in 1865 the family relations were resumed and remained the same until he went to Texas, which to my best recollection was about 6 months after his return and neither before nor after that date was he married until he on or about August 7, 1868 he married E. I. Hall, who after his death which occurred in Texas, remains his widow and is now living in Deming, New Mexico, and is claimant for a pension as the widow of my said brother Thomas.
Fannie Neason
X (her mark)

Had I not started sharing the information I already had, I never could have made this connection. A big "Thank you!" goes out to my second-cousin Brian and (maybe third-cousin?) Carol!

Who says family history is boring?