Time Marches On, Progress, or Losing Our History?

June through the beginning of July was a sad period for me. Two buildings that I knew while growing up came to the ground within weeks of each other. First was the old Panther farm house on Highway 218 near the old Highway 103, now known as the J40. I knew the home had fallen into disrepair and that it had recently sold. During our recent trip to southeast Iowa, I had heard they were planning on tearing it down. I tracked down the phone number of the new owner and gave him a call. It ends up that the crane was due to arrive and begin demolition in about two hours!

I dropped everything, grabbed my cameras and went out to the house. My wife and I wandered around inside, looking for any mementos that we could find.

The owner had already had an architectural salvage store come in and pull anything salvageable. I'm glad they were able to get the old stair posts and stained glass windows. They also pulled counters, cabinets, baseboards and anything that could potentially be usable. Had I known this was going to happen, I would have come more prepared. I didn't have any tools with me that I could use to pull crown molding from the top of a window or two. I did manage to pull a few small pieces of trim and molding. There was even a small plastic crucifix still stuck to the tile back-splash in the kitchen.

When we met up with the Panther family later that week, I gave the crucifix to my aunt and she was very appreciative. It was just a tiny little thing, maybe 3 inches long, and made of plastic with the silver chrome-looking coating on the surface. It was one of those things that she probably didn't even notice any more since it was so small and insignificant that she saw every day of her adult life. Once she realized what it was, she was incredibly happy.

While looking around the upstairs of the home, I heard a semi tractor truck pull up. I looked outside and saw the crane being pulled behind it. It was such an odd feeling. Here I was, inside the home my grandparents and my aunt and uncle raised their children in. The actual house my mother was born in, and the crane that would tear it to the ground had just arrived. 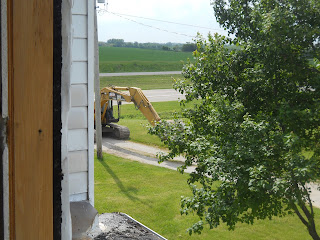 I set up two GoPro cameras, one looking at the home from the southeast and one from the northeast. I was desperately low on battery power for the GoPros and my smart phone and low on memory for my point-and-shoot digital camera. Through diligent use of available power and memory, I caught the final hours of the home. It was an emotional experience.

Talking to my mother, my aunts and my cousins, they all agreed that I should not post photos or video of the destruction on any public site. If you would like to see any photos or video of the destruction, let me know. I may decide to post it somewhere but not publicly. I would also need a guarantee from anyone that wants it to not share it with anyone else.
Then, the old train depot in Columbus, Nebraska. It was such a unique building with interesting architecture. Growing up, I'd ride in the car, ride my bike, or walk past it practically every single day. I don't know how to describe it. Think of something unusual in your environment that you see every day and take for granted that if someone that wasn't from the area would take notice of as being unique and interesting. That was the depot for me. I was in the depot maybe once when I was a child. It hadn't been used as a depot in decades. The Union Pacific Railroad used it as office space in recent years.
Due to the law, the depot was located too close to the train tracks. I thought they built it close to the tracks on purpose! Isn't that the point? The city looked into moving the building to another location but since it was built of stone, the cost was just too much. I would have thought that taking donations from residents of Columbus could have raised the money necessary to move it. At least they did salvage some pieces of the building. I believe some pieces can be found at the Platte County Museum. 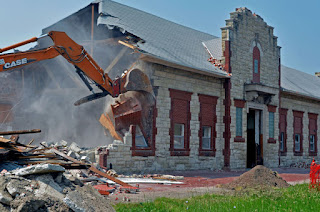 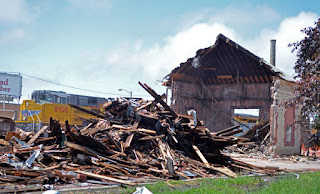 Here is a video of the last of the depot coming to the ground.
https://www.facebook.com/PlatteCountyNEMuseum/videos/1067380569956251/?fref=nf

Time marches on. Heck, today is my last day at an employer that I've worked at for over fifteen years. Time to move on to bigger and better things. They call it progress. Still, it makes you stop, take a look around and appreciate the things in your life right now. Do it today.