"Old man Dublins may well be called the theifs hous. Black Burt the head man of the thieves...
A heavy set dark comp. [man] wants to kill every stranger that comes into the neighborhood fearing that he is a detective. Rich Doublin, Dell Doublin, Black Burt, Thos. Doran, Frank Burk, John Burleson Cale Hall $400 reward for him, Bill Deal, McGrue Allison, John McKiever and numerous others that I could name are in the county, the sheriff of the Co. is in full concert with them..."

Later, David D. Johnson writes, "Late in the evening of March 14, First Sergeant M. F. Moor with nine men, along with some local citizens, scouted the South Llano River. They arrested Charles D. Edwin for cattle theft, then went to the house of a man named Tom Doran looking for Cale Hall. The arrival of the Rangers set dogs to barking and Hall ran out the back into the brush..."

So it sounds like Tom Doran and Cale Hall were friends or at least accomplices in their misdeeds. When I first read this, I realized that Tom's wife's maiden name was Ethelena Iola Hall. Could Cale and Iola be siblings? It would make sense that he has his brother-in-law staying with him.

So I did some digging. I found them in the 1860 US Federal Census, living in Brazos County, Texas. Ethelena was nine years old and Cale was one. Both of their father's names were William. They lived next door to each other and are apparently not related. 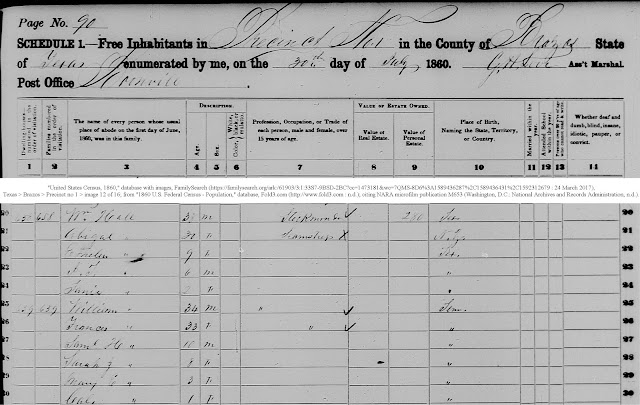 "Jones declared that the 'backbone of the rebellion against law and order in Kimble' was broken, and on the 29th escorted Judge Blackburn and other attorneys into Junction to hold court. He was ultimately able to tally a total of forty-one arrests, thirty-seven of them in Kimble County, including the county judge and sheriff, and a grand jury quickly returned twenty-five indictments. However, no trials could be scheduled because the jury commissioners could only find 'nine good honest citizens' who were qualified to serve as jurors."

Even though I didn't find that they were related, finding these little details about a real life wild west town that has a connection to my family is fascinating.