My great-grandfather, Aloys Panther, and his wife Monica Hanle Panther, along with their oldest son, came to America from Baden in 1872. Why? I had speculated that the end of the Austro-Prussian War, the death of his brother and the death of two of his sons may have convinced him to try a for a new start in a new land. I believe his brother may have paid a return visit to his home town to convince him to follow him back to America.

Ferdinand Panther was born in the village of Moesbach, Ortenaukreis, Baden, next to the Black Forest and the border with France, in 1833. His brother Philip followed in 1834, then sister Maria Anna in 1835, Aloys in 1837, Michael in 1841 and finally Moriz, named after their father, in 1844. Ferdinand came to America on board the ship R. L. Gilchrest in 1854. I speculated, based on a newspaper story when my cousin visited their home town in 2015, that perhaps Ferdinand couldn't support himself during the hard years that were experienced around that time and that he brought his girlfriend, Amelia Traub, along with him. They were not married in Moesbach. They were apparently married in Pennsylvania but we have not yet found documentation of this. I did recently find the ship's passenger list of their arrival. 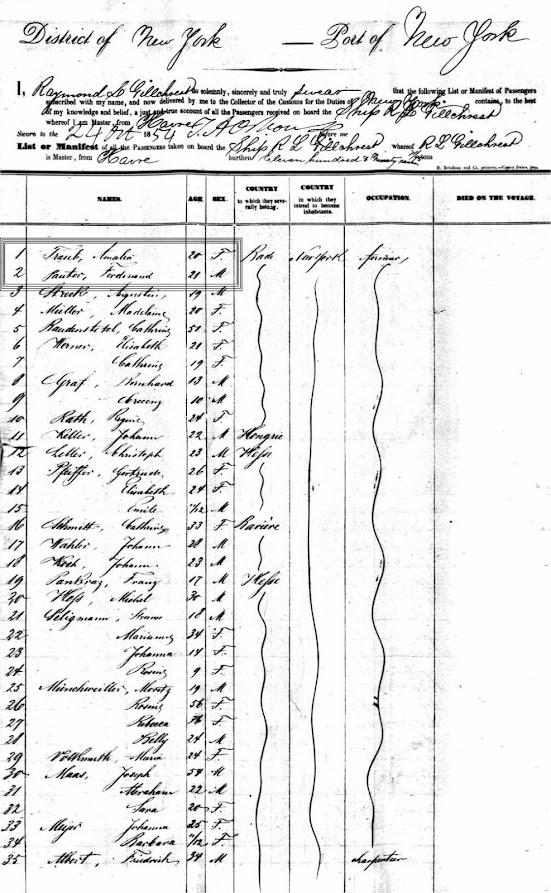 One thing I found several years ago was the database of "Auswander", or emigrants, out of southwest Germany. This database did not contain Aloys Panther but it did contain Ferdinand. Here is a printout of his entry. It shows his first and last name, the town he came from, Moesbach, the year and the fact that he was traveling to North America.

What is interesting is that I found a second entry for Ferdinand. This one showing his arrival in 1870.

I can't find a ship's passenger list for this voyage so I can't be certain this is Aloys' brother. There could have been another Ferdinand Panther from the same town. However, when we look at what happened in the two years following this last voyage, I believe it is likely that Ferdinand, after spending over a decade in Pennsylvania, moving to southeast Iowa and starting a farm there, may have created a good life for himself and his family. I believe that he chose to take a round trip to visit his home village. During his time there, I believe he spoke to his brothers and sister and left an idea in Aloys' mind that America might be a good idea for him. This visit would have occurred shortly after the birth of Aloys' first child and while his wife Monica was pregnant with their second child.

After Ferdinand returned to America, several things happened. First, Aloys and Monica lost the child they were expecting at the age of 7 days. They named him Franz Xaver. A little more than six months later, Monica became pregnant again. On April 9, 1872, Monica gave birth to their child and they named him after Aloys' brother, Ferdinand. Little Ferdinand died a few days more than four months after his birth, on August 13 and they buried him on August 15.

On the family's entry in the church family book, far to the right, is a note.

It reads "Auf Amerika am 14 Sept 1872 Vale!" They left for America less than one month after the child named after his brother in America died. This about two years after his brother visited from America. I have to believe that Ferdinand told him wonderful stories of life in America. Aloys and Monica, along with their one surviving son, named after Aloys' father, Moritz, arrived in New Orleans on October 6, 1872. 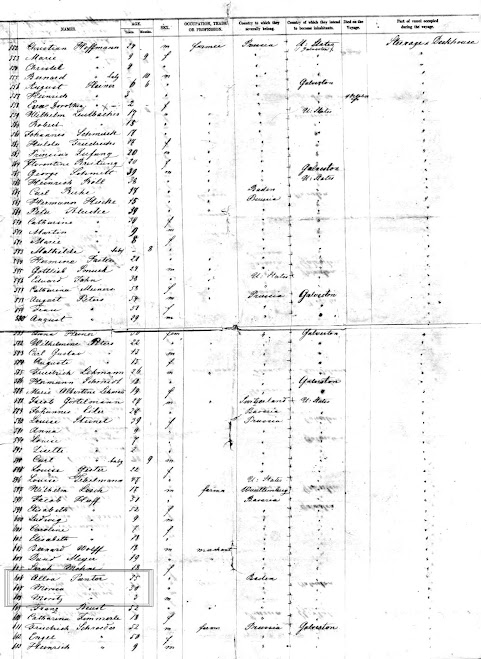 They settled in New Orleans for almost exactly 9 months. Long enough for their son Frank Ignatius to be born. They then traveled by way of riverboat up the Mississippi river and settled near Ferdinand in southeast Iowa.