I encourage all genealogists to do their best to find all of their direct ancestors in every available census. The only way to do this is go have a plan and go at it systematically. Ancestry.com has the 1880 and 1940 US Federal Censuses available to everyone for free. There's no reason not to be sure you have the census images for all the ancestors you can.

What I did was decided I was going to work on the 1880 Census. I pulled up my family tree in pedigree view. This showed me all ancestors back to and including all of my great-great-grandparents. I started a the top of the chart (the direct male line) and figured out which of them would have been alive at the time of the 1880 census and where they were living at the time. If I didn't already have the images of them in the census, I went to Ancestry, brought up the 1880 census and, on the right side of the page, browsed down to the town I expected them to be in. 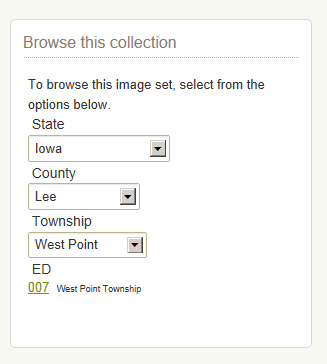 This is where my search turned interesting. I found all of my ancestors I was looking for except for my great-grandfather, Johan Anton "August" Menke and his mother, Elizabeth Geers Menke. If you can't find the person you're looking for, really look at their information. Study their family structure and verify you're looking for the right information. The reason I couldn't find August Menke is because August Menke wasn't listed in the census! Studying his information, I realized that, although his father had died on his voyage to America, his mother was still alive. The thing that I missed (I knew it but really hadn't realized it when looking through the census records) was that she was remarried. Her husband's name was Henry Schutte. I searched for Henry's family and here's what I found:

﻿
Henry Schutte, his wife Lizzie and his children, including August, indexed as August Schutte. The family was living in Marion Township, Lee County, Iowa. It also gives me more information about Henry's family. I knew he was married prior to his marriage to my great-great-grandmother but didn't know anything about their children. I am now working under the assumption that the children listed that are not the children of Johan Diedrich Menke and Elizabeth Geers must be the children of Henry Schutte and his first wife, Maria Anna Krehe.

In my case, while I hadn't really put a lot of thought into it, I was probably looking for Johan Diedrich Menke's family, when, in fact he had died before this census. My searches were for August Menke and they kept coming up blank. August was a teenager and would have been living with his mother and, if she had remarried, with her new husband. When I realized that they had remarried five years before this census, I realized I needed to be looking for Henry Schutte's family.

The lesson? If you can't find someone in a census, really study the family structure that would have existed at the time of the census and browse the census page by page if you know the area they would have been living at the time.