I got a question from a Miller cousin who asked about Patrick Anthony Miller, the brother of my father who died when he was about two years old. There is some confusion regarding how he died. The Bixenman Family History book notes that he drowned in a pond on the family property. My mother and at least one of my cousins thought that he died of an illness. I decided to see what I could find out about his death.

First, here is his headstone in the Sacred Heart Cemetery in Fort Madison, Lee County, Iowa. He is buried close to his parents and grandparents.

One interesting note that jumps out at me is that his name on his headstone is "T. Patrick Miller". Could it be that his given name was Anthony Patrick and they called him Tony? Could be. I don't have information regarding his birth and he didn't live through a census enumeration so we don't know for sure.

The next step of our investigation is figuring out where the family lived at the time of his death. Was there a pond on the property? He died in 1928 so first we look in the 1930 US Federal Census.

In 1930, the family was living at 1545 Avenue L in Fort Madison. The head of household was Thomas Doran, my great-grandfather. It also lists my grandmother's sister Mamie living there, along with my grandfather, Leo Miller, his wife Julia and two children, my uncle Leo and my father, John.

I asked my mother about the house. She said there was a big controversy as to the ownership of the house. It was willed to Mamie Doran after the death of their father but her sister Julia and Julia's husband, my grandfather, Leo Miller lived there after their marriage.

Last weekend, I was at my mother's home, going through boxes of old photographs and came across photocopies of some legal paperwork describing the legal ownership chain of the home. At this point, I know I'm straying far from the task of figuring out what happened to Patrick but this is a lot of new information and I need to document it. 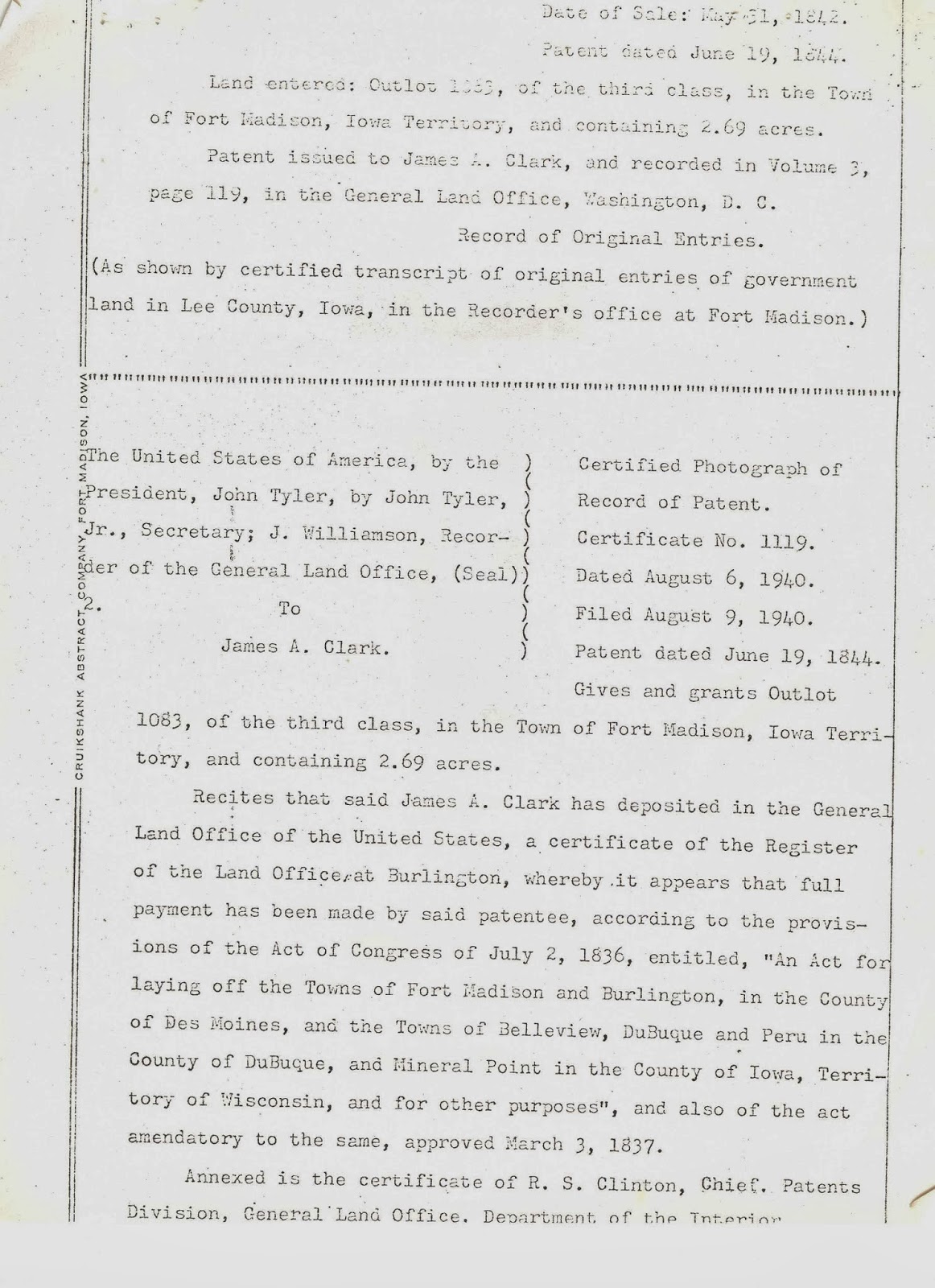 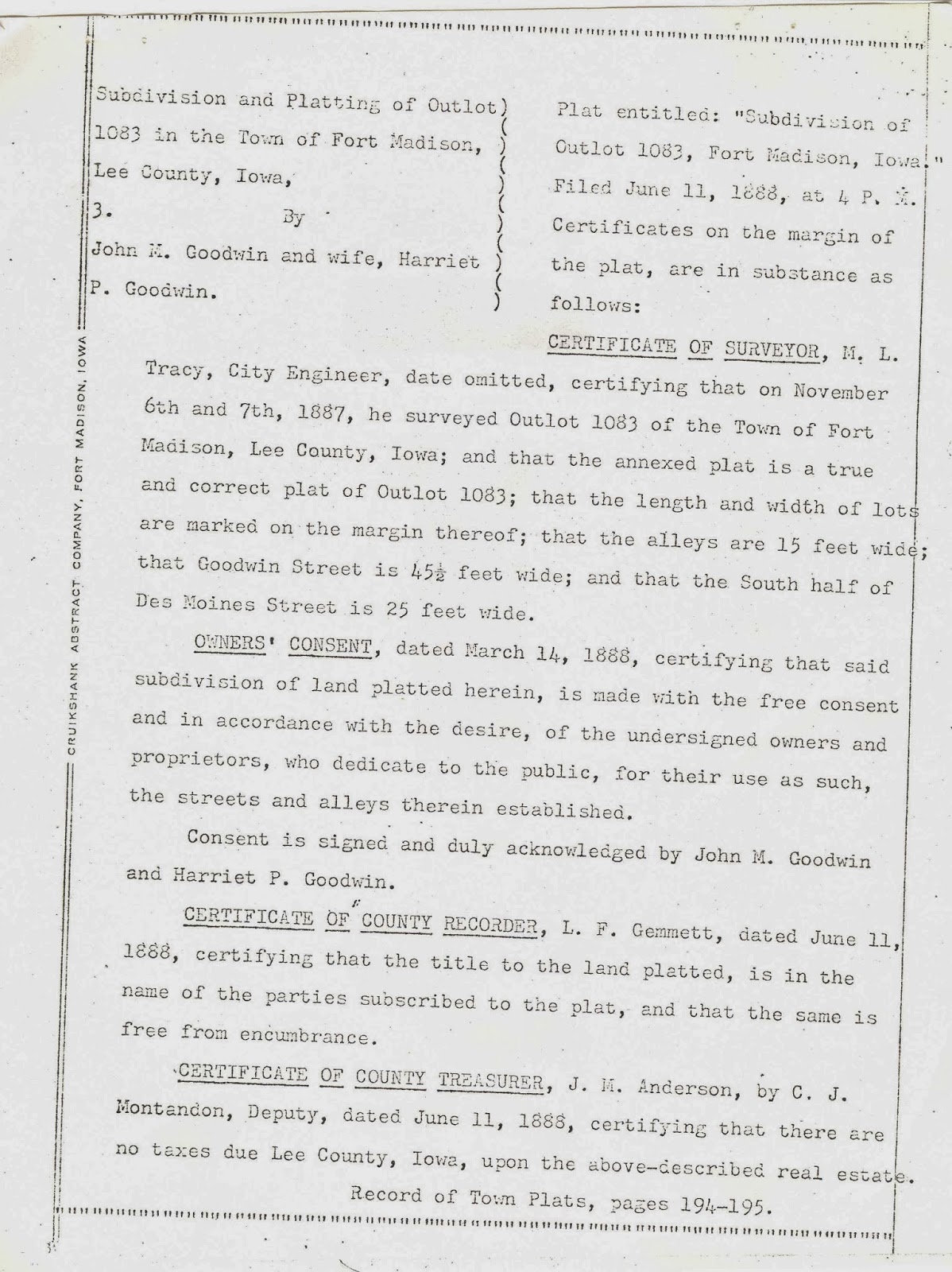 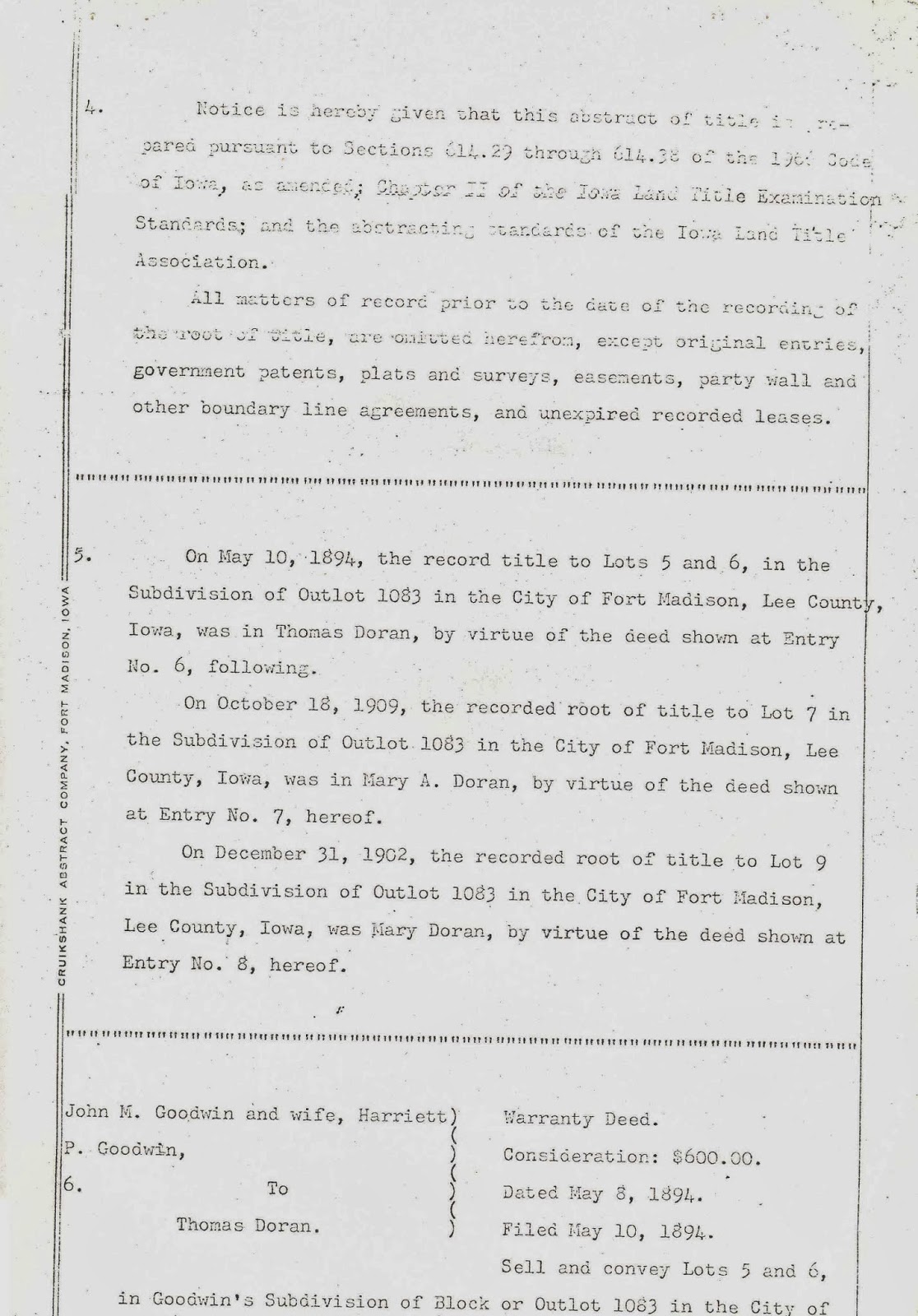 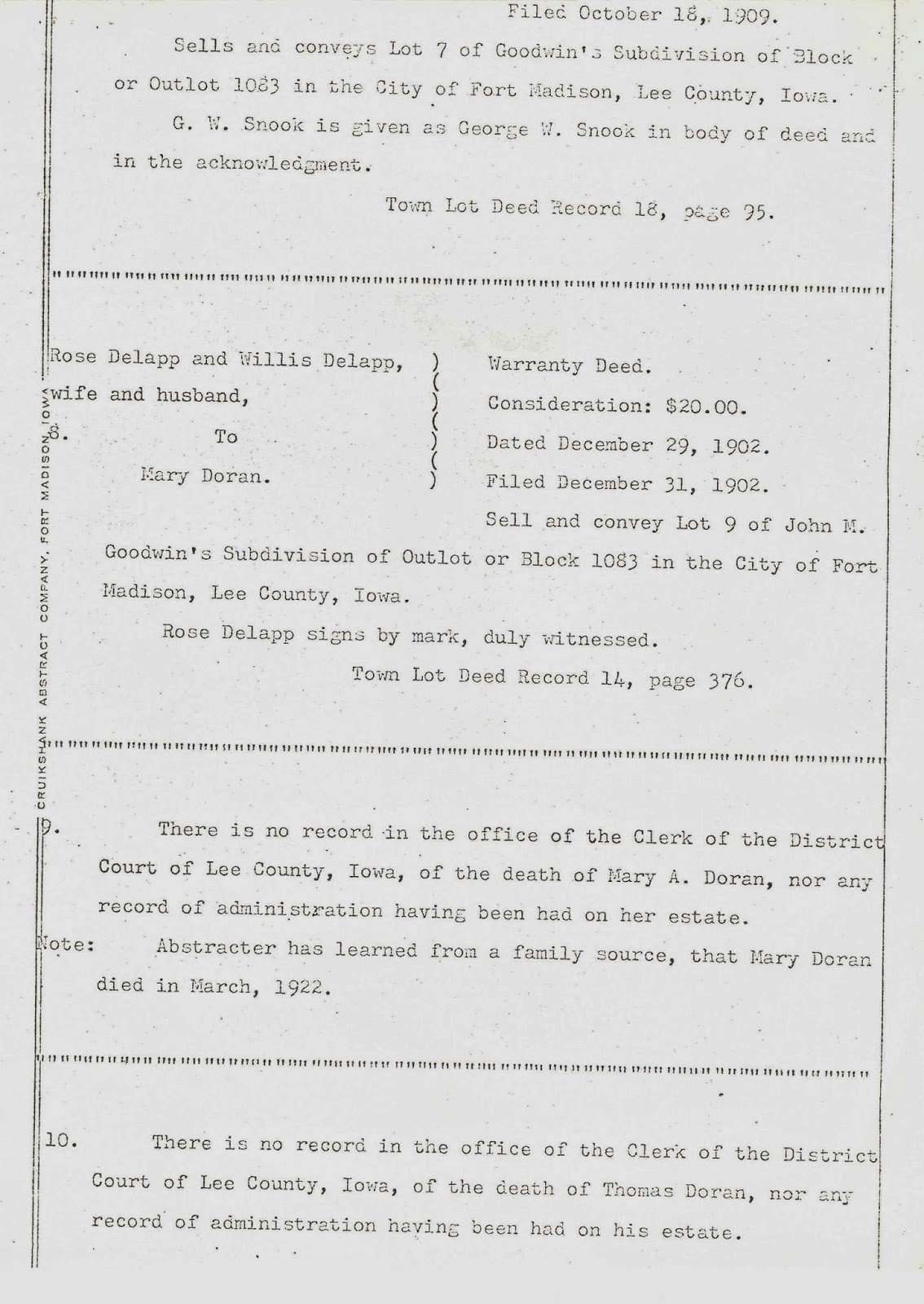 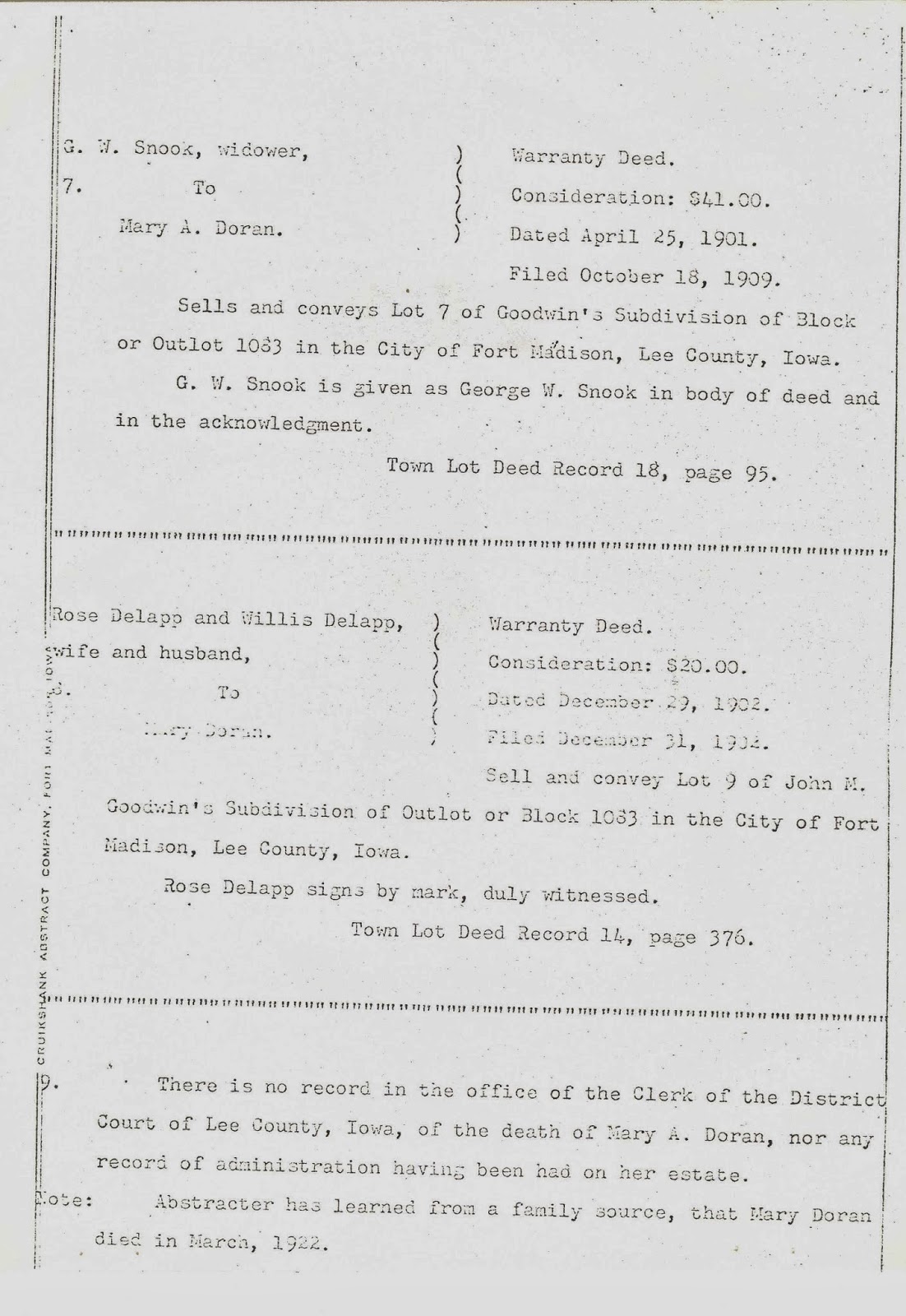 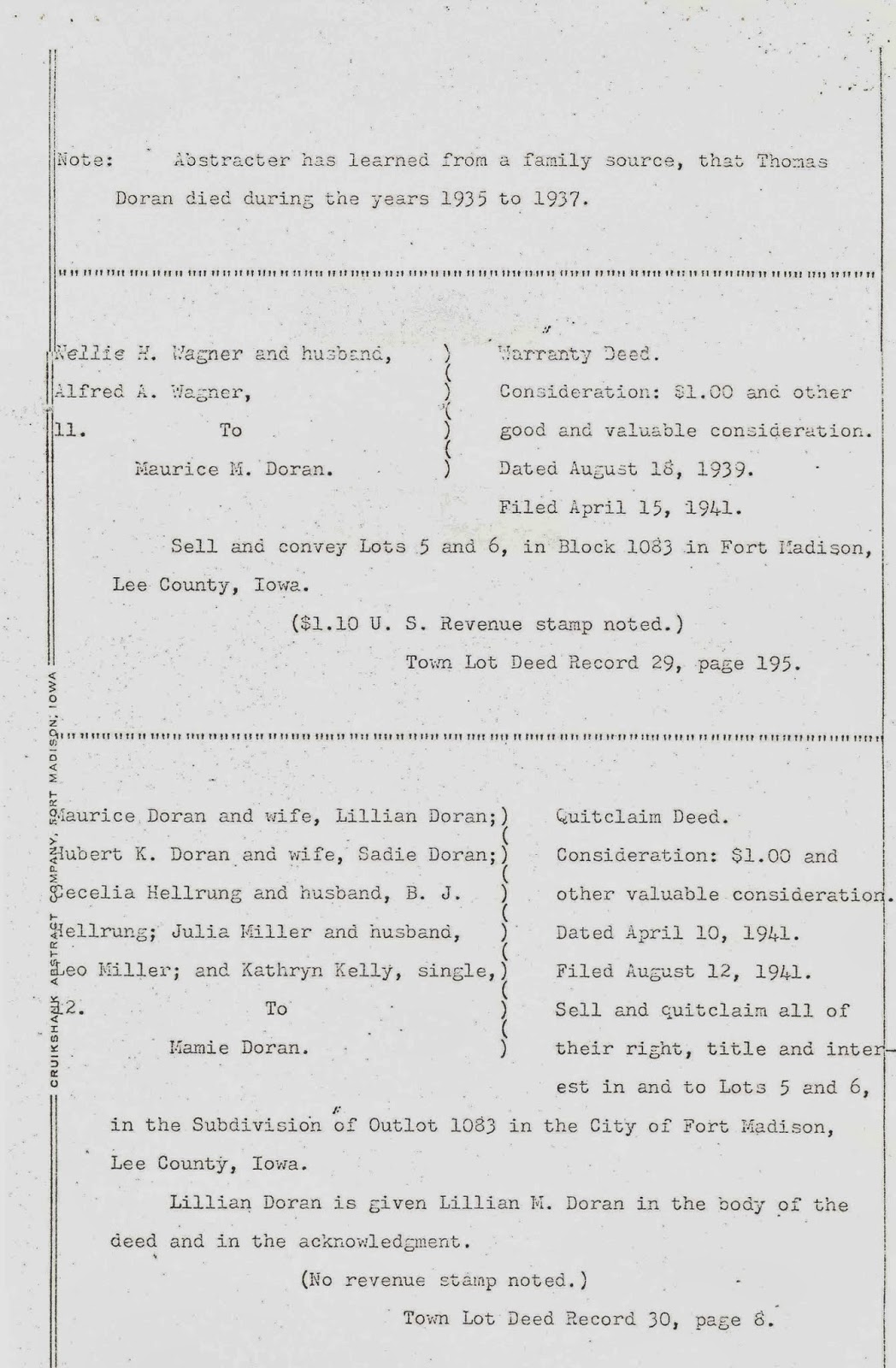 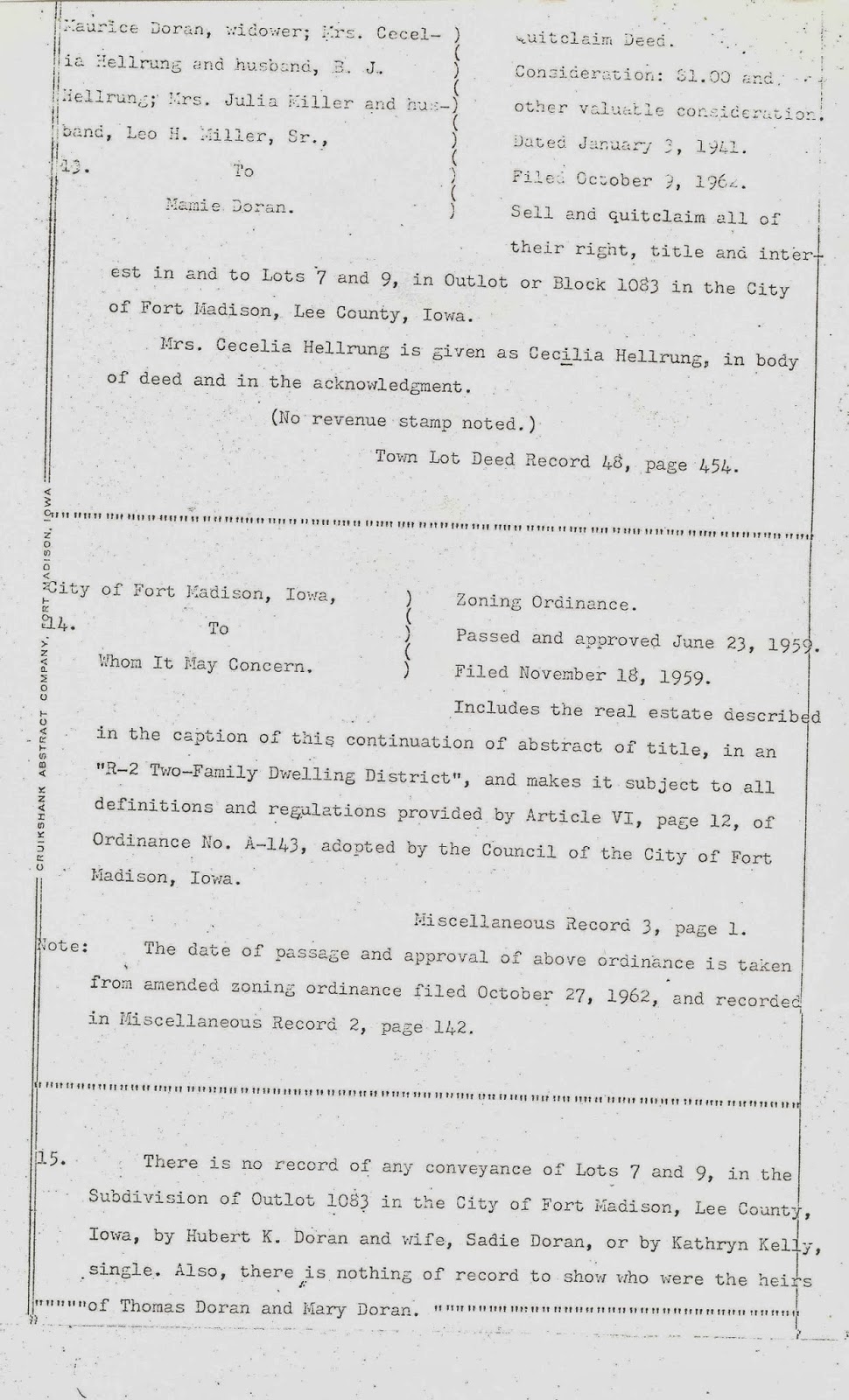 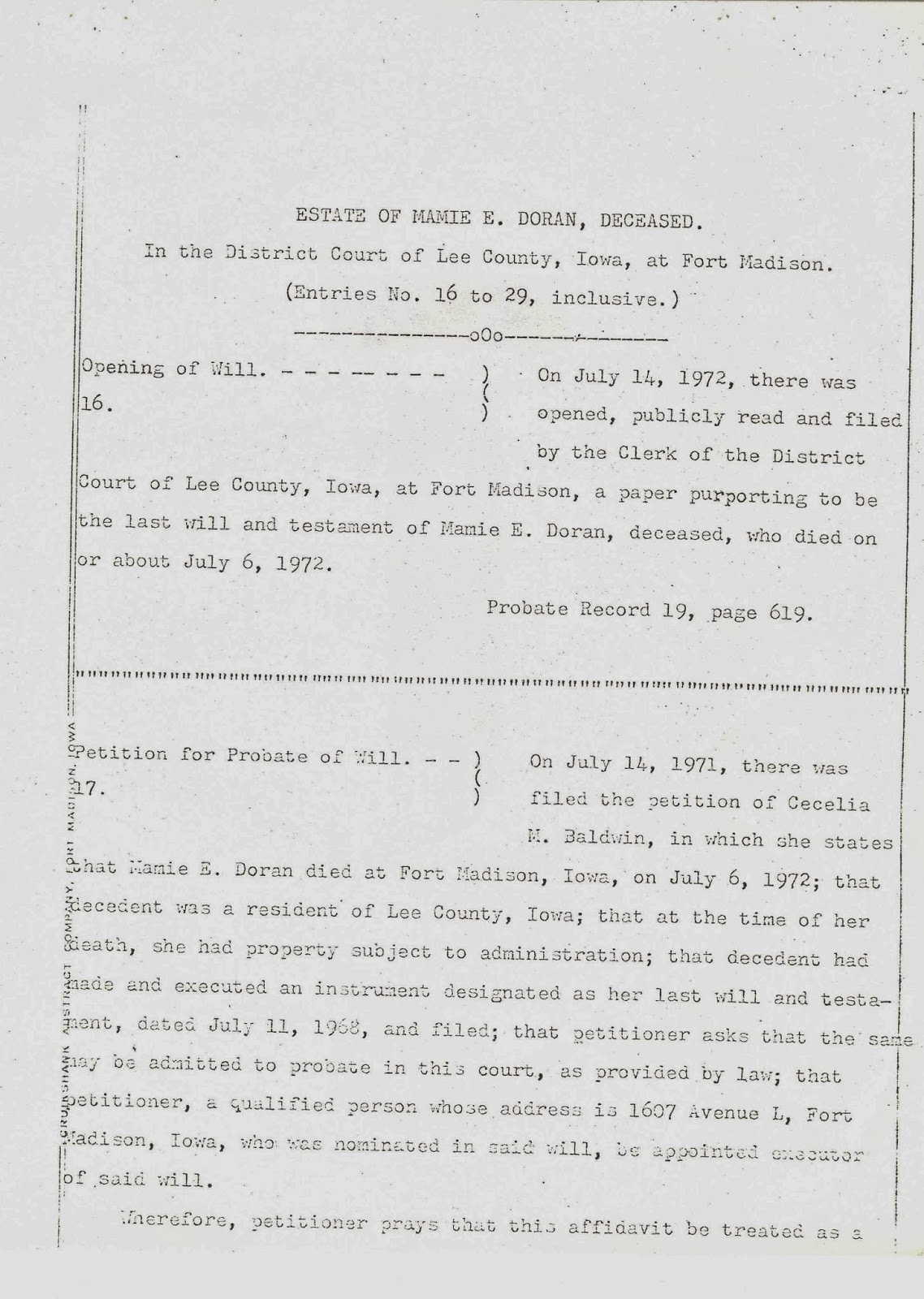 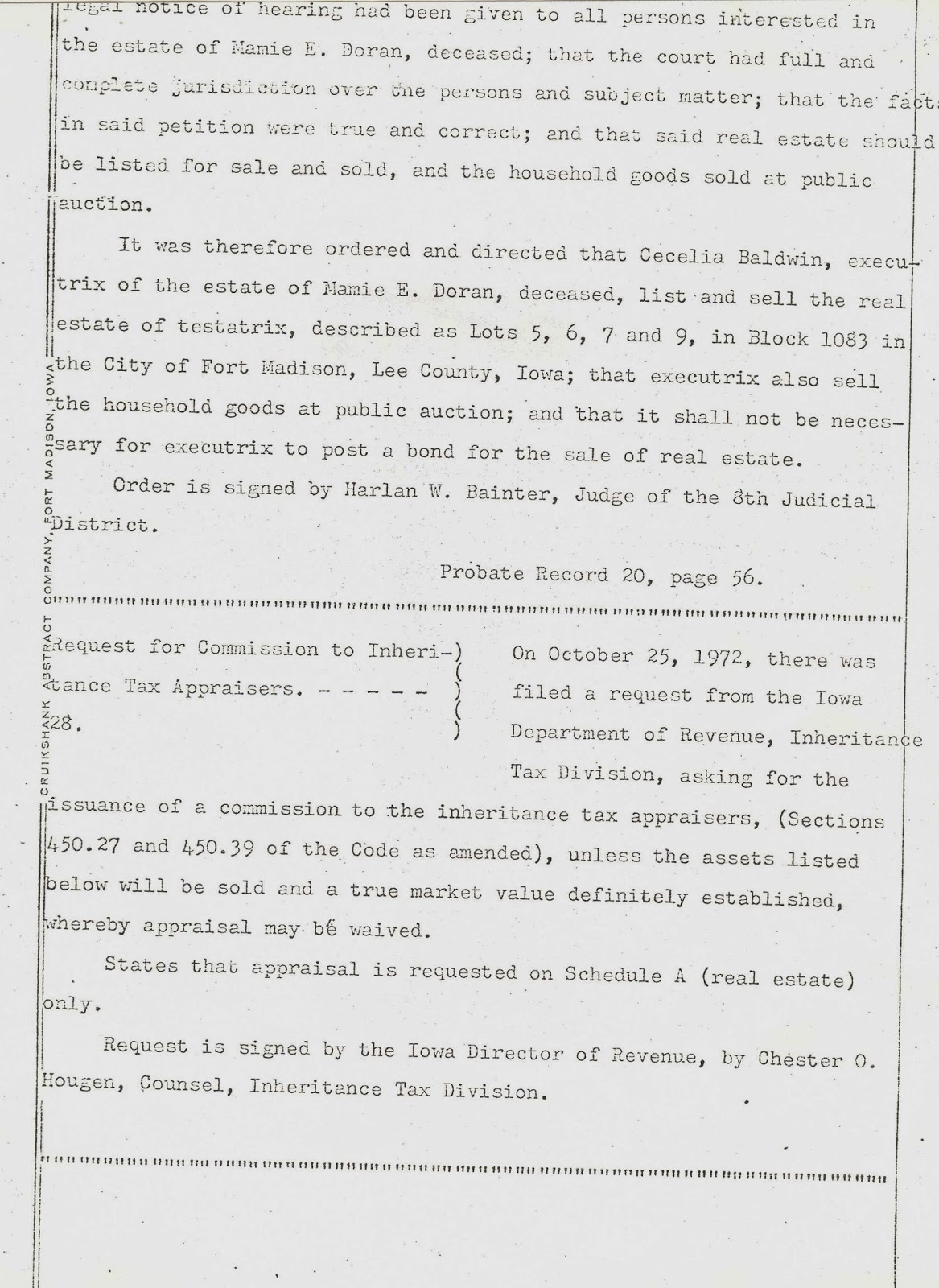 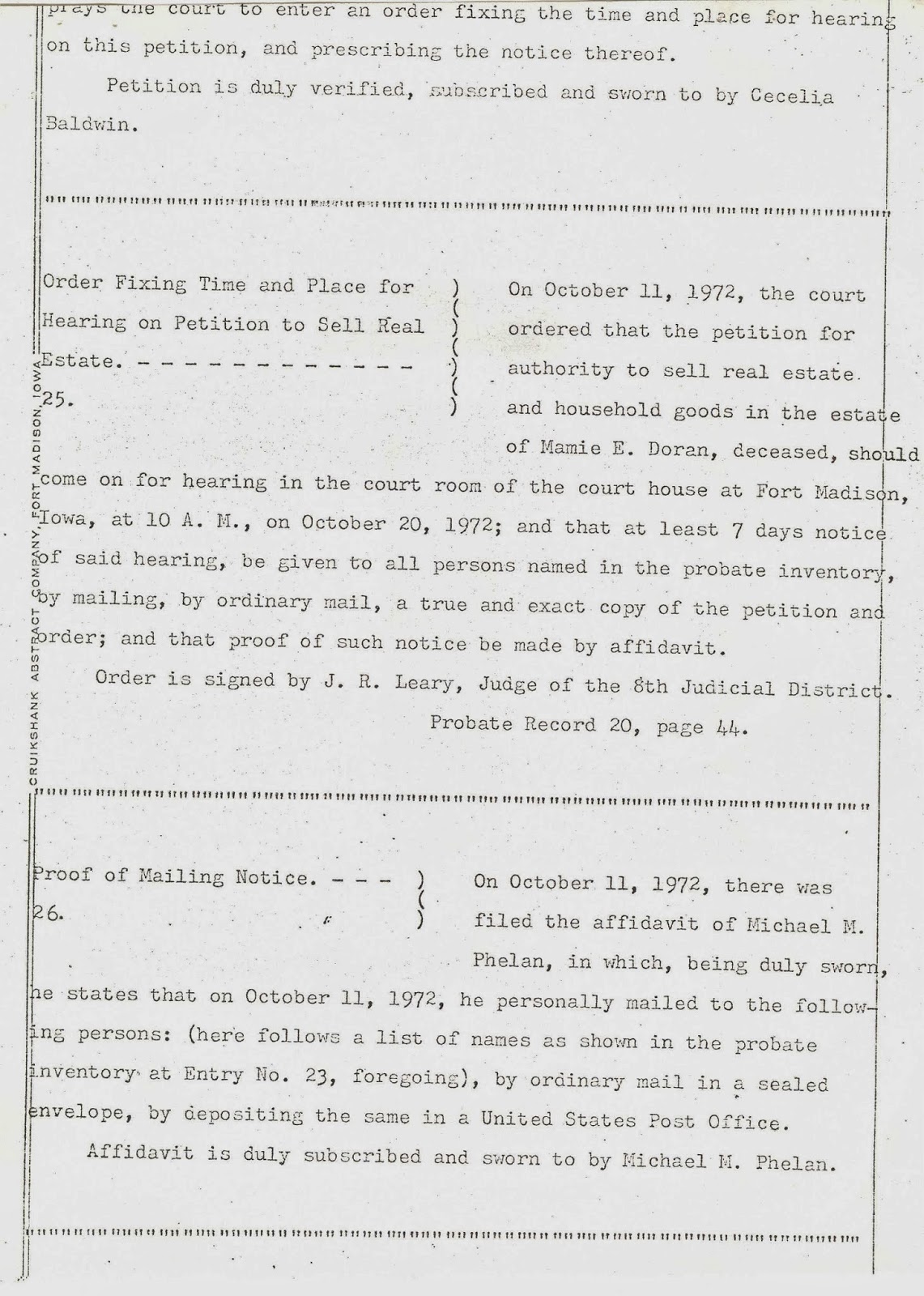 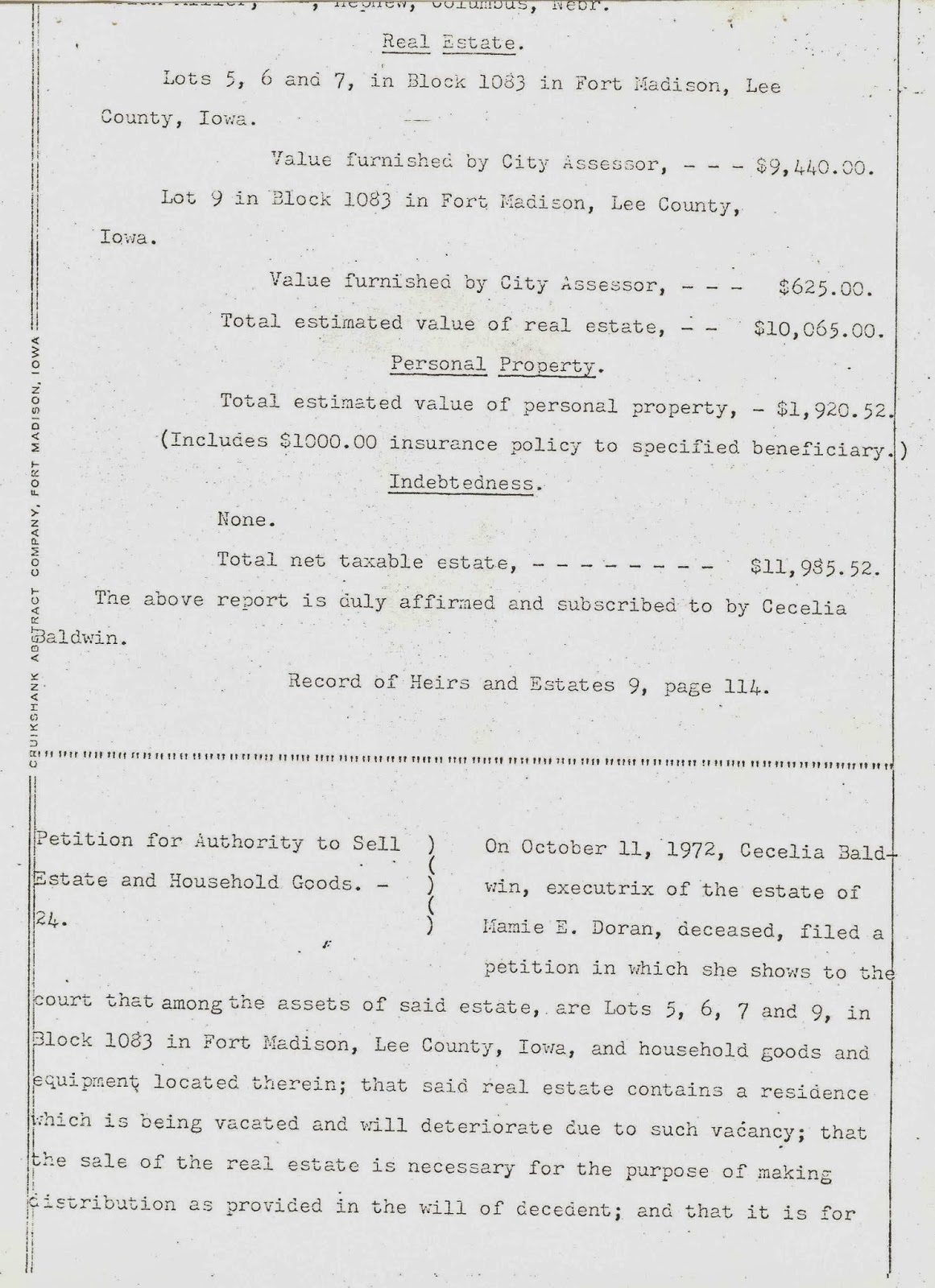 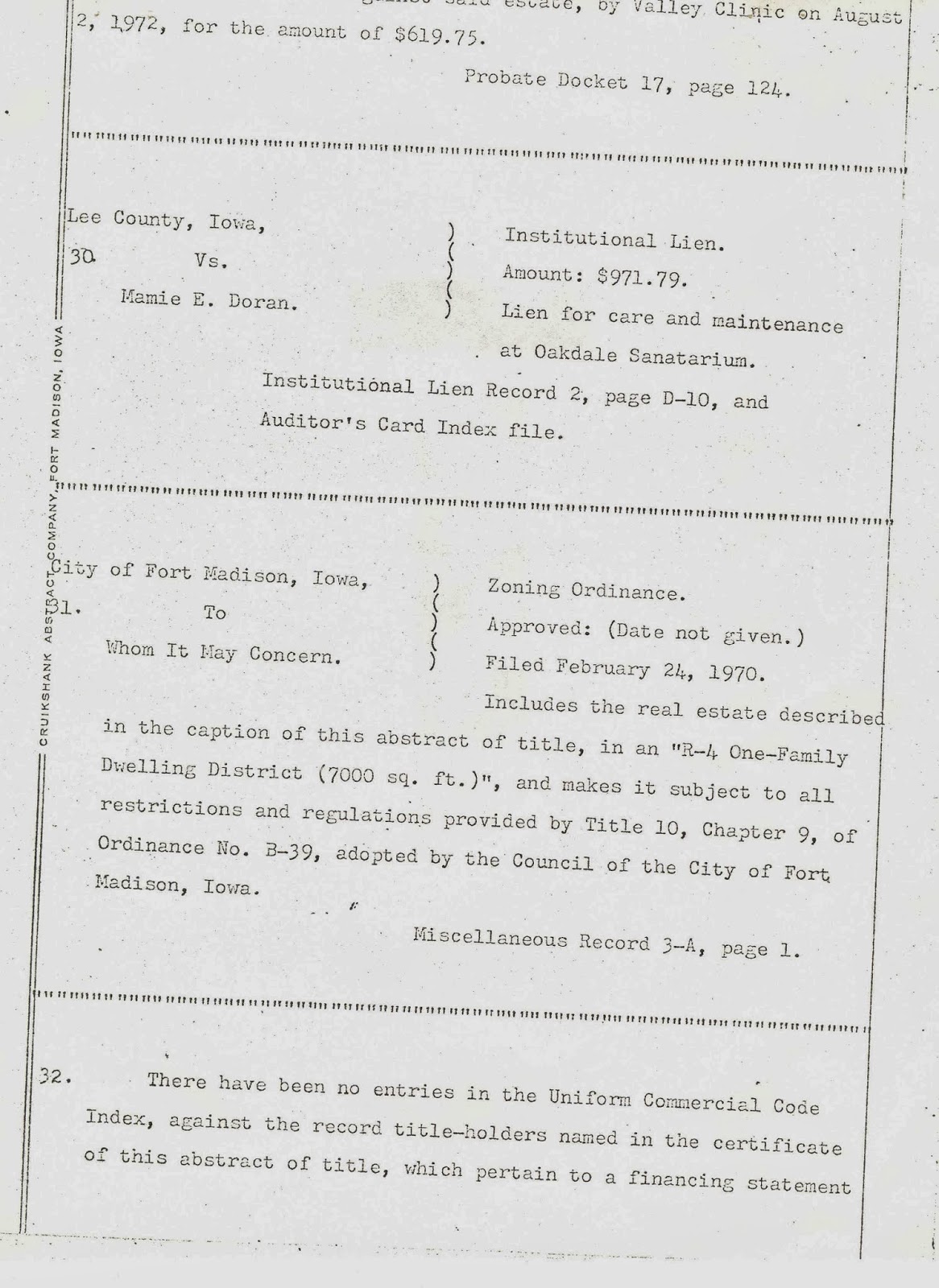 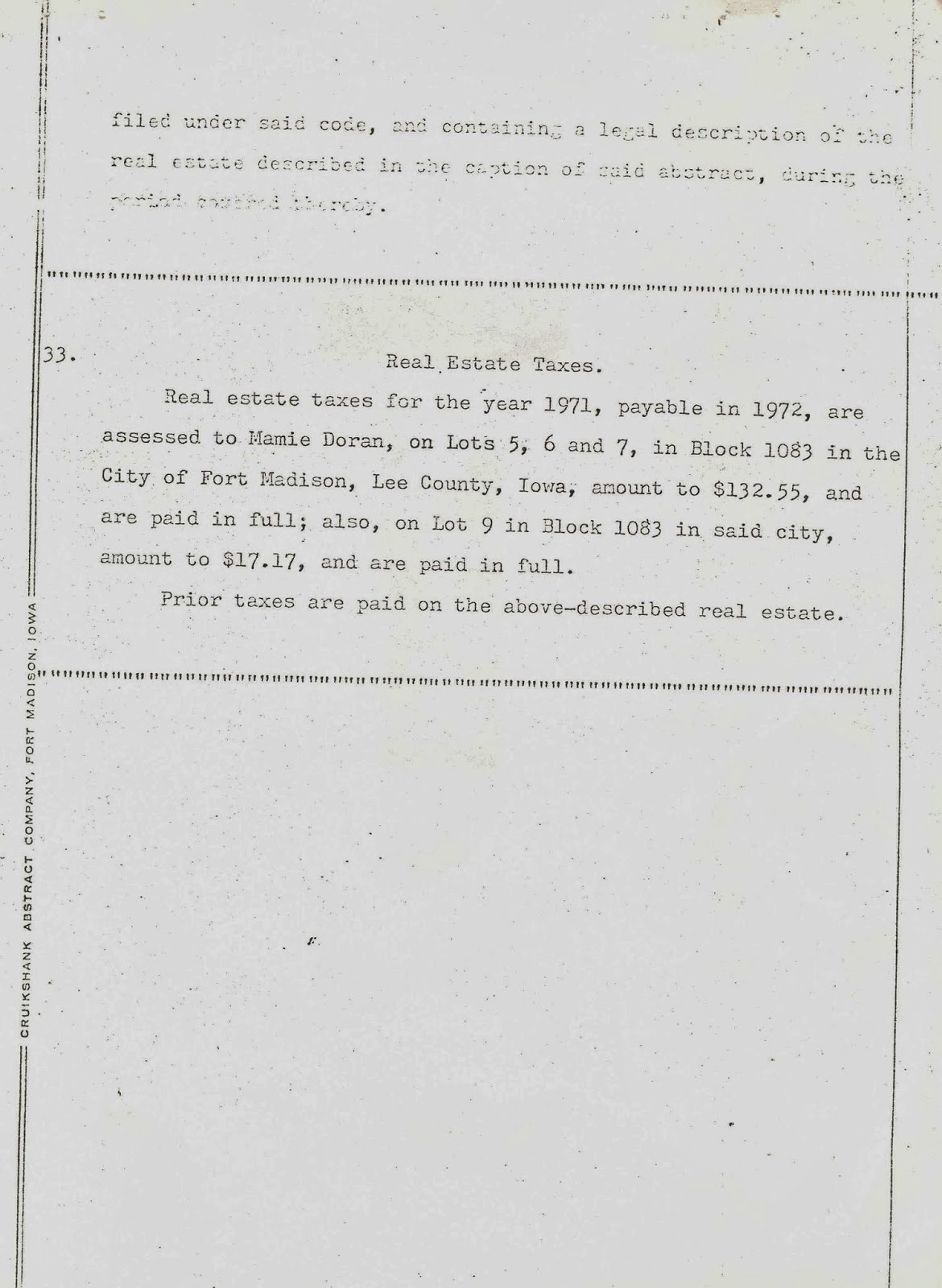 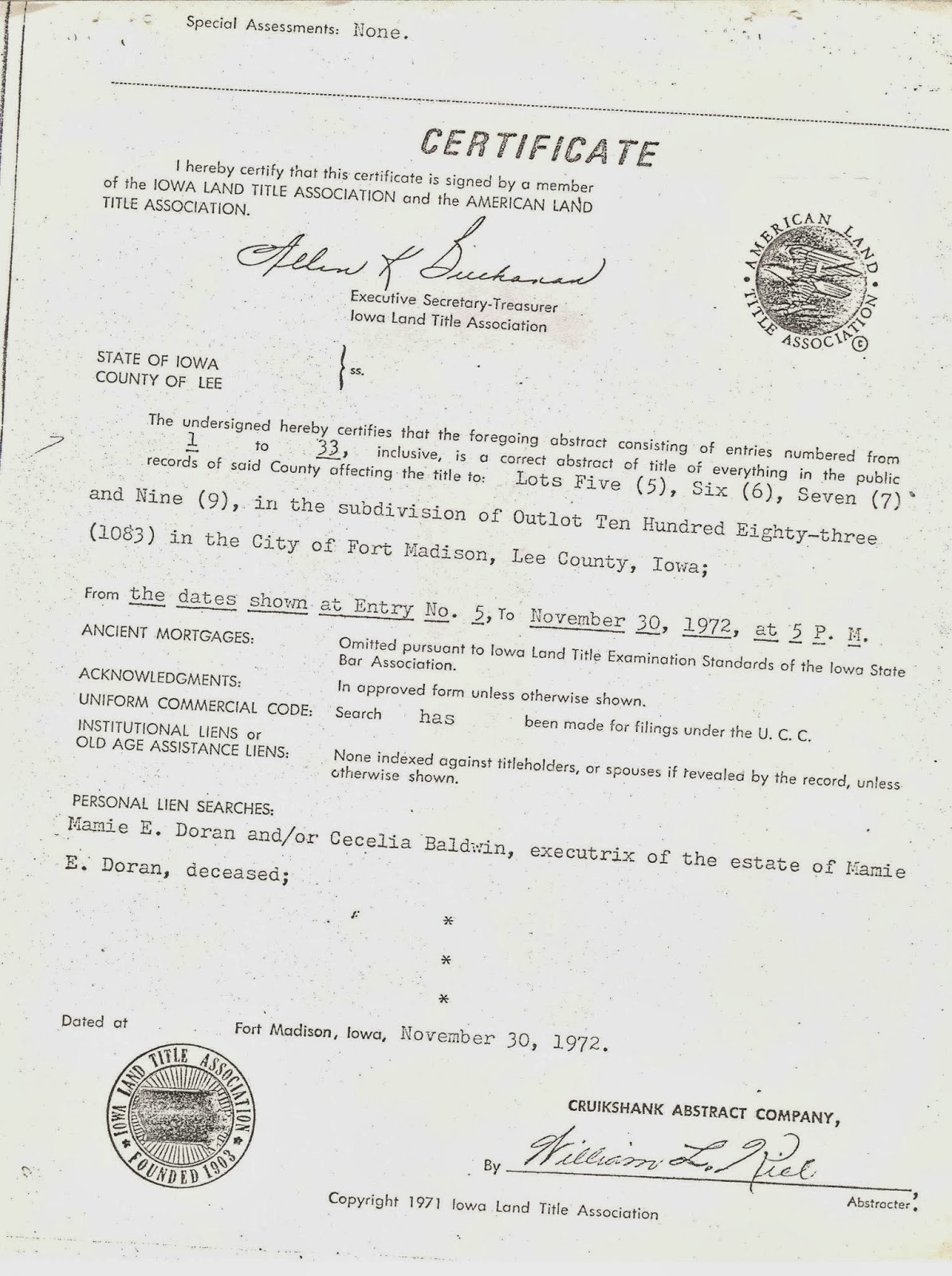 The property documentation, unfortunately, doesn't clarify what exactly happened to Patrick Anthony Miller, who died in 1928. Looking at Google Earth, there isn't a pond on the property. 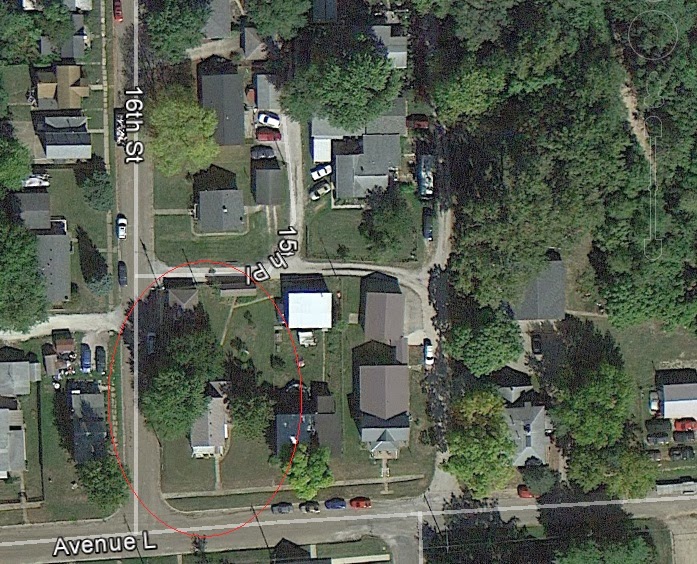 However, at the time, the property included three additional lots. It is possible that there was a pond in that location in 1928. If not, there is a small stream or river just to the east of the property (where you see the trees in the Google Earth image) that a two year old could have drowned in, plus the Mississippi River is not far away. We don't have an answer yet as to what happened to T. Patrick Miller but you can see some of the tools available for finding out the answer for some mysteries you may come across.