I had this old photo of my parents and my two oldest brothers. Given their ages in the photo, I'd estimate it was taken in 1958. 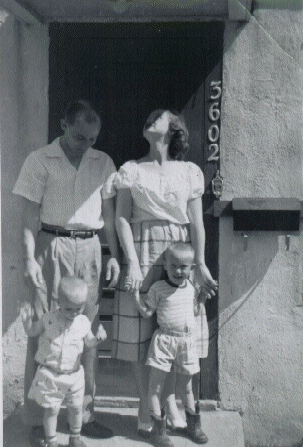 So where was this photo taken? I see the house number of 3602. Unfortunately, that doesn't tell me much. Had I truly thought about it, which I didn't, I may have been able to find it. I recall my mother talking about how they lived for a time on 18th Street in Columbus, Nebraska. I just never bothered thinking about where this was taken.


My mother is in the hospital. I won't go in to details but we thought we were losing her. She's still not in out of the woods so your prayers are appreciated. My third oldest brother is in town, visiting Mom in the hospital and he said we should go by the old house they used to live in. This brother was just a baby when this photo was taken and he does not appear in the photo. He said they lived in two different houses on 18th Street. The first one they lived in was a stucco house. He didn't know the address. We drove around for a while and were pretty sure we had found it. It's located on the corner of the block.

I took photos of the two houses and went back to Mom's house. I brought up my laptop and found this photo. The house number does match up with the location the house is located, although it appears that some time over the past 58 years, this door was boarded up, the house was lengthened and a new front door installed on the side of the house that faces the other street and was renumbered since it officially fronts on the other street now. In addition, the siding is no longer stucco.

I brought up the house on Google Earth and fit this old photo into the appropriate location on the Google Street View photo. 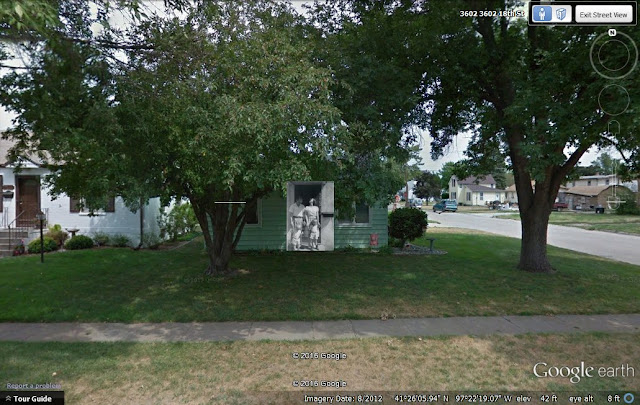 I thought this turned out pretty good so I looked for other photos I could do this for. Unfortunately, I only found one. Here is the old Panthers in Germany postcard passed down in the Panther family in America. 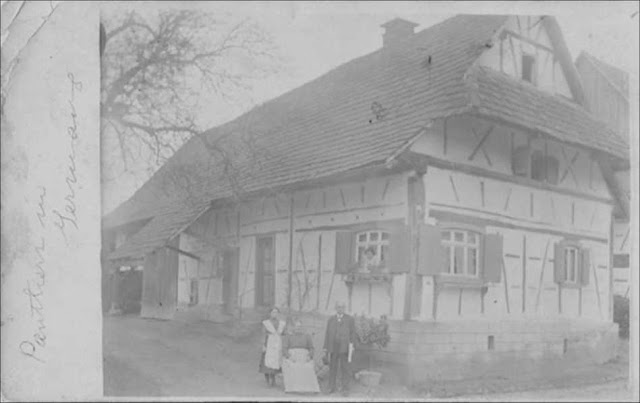 A few years ago, my second cousin went to Moesbach, Ortenaukreis, Baden, Germany and took a photo of this house, which is still standing. I cropped out the Donat Panther family and pasted them into the new photo. 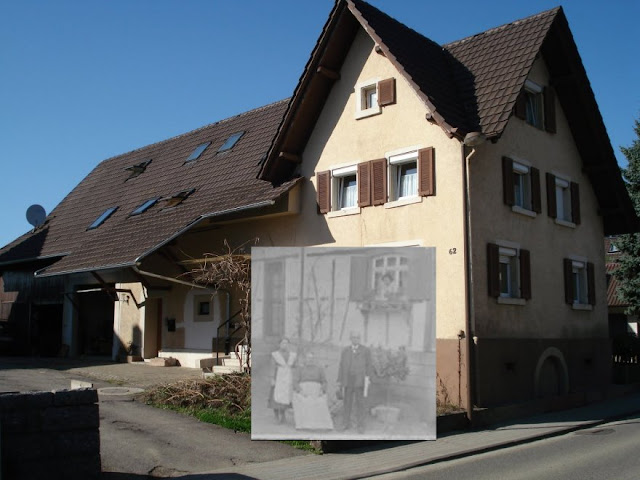 I enjoy putting family members in historical photos into the appropriate locations of new photos. To me, it puts the people and their time into perspective in real world.

Try this with old photos you have that were taken in a recognizable spot in the real world. Paste the people in the photo into the correct location in a photo taken recently. Maybe you'll understand the people a little better.