A distant cousin sent me the death announcement (found on Warsaw, Illinois newspapers online) for a granduncle I didn't know existed. He was the brother of my grandmother, Julia Doran Miller. Previously, I had found an indexed record, not an image, of the birth of a child of Thomas and Mary Ann Kelly Doran. In this indexed record found on Family Search, it didn't contain an exact birth date, a name, or even a gender for the baby. This baby was born in Bloomfield, Davis County, Iowa, in 1884.


Here is the death announcement for John Doran, son of Thomas and Mary Ann Kelly Doran, found in the June 17, 1898 issue of the Warsaw Bulletin, in Warsaw, Hancock County, Illinois. 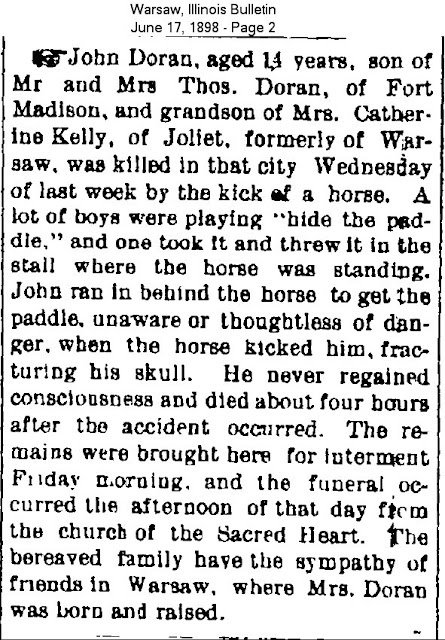 As you can read in the article, John was 14 years old in 1898, which puts his birth in about 1884, which is the same year as the birth record I had previously. It says he was kicked in the head by a horse in Fort Madison, Lee County, Iowa, when he was not careful when walking behind a horse in a stall, trying to pick up a paddle he and other children were using to play "Hide the Paddle".

The next time I'm in Fort Madison, I'll do some more searching in the Fort Madison Daily Democrat to see if I can find his obituary or any further information. This announcement also makes clear that Catherine Murphy Kelly had moved to Joliet by 1898.