My cousin called me a couple of weeks ago saying he was in contact with someone descended from Ferdinand Panther and Amelia Traub. He said this man had some old photos I might be interested in getting a scan of. He texted me photos he took of a few of them with his phone.

I called the man, who lives in Mediapolis, Iowa, which is near Sperry and Dodgeville, where my Panther ancestors settled when they came to America. My cousin gave him a copy of my Panther family history book. Chatting with him, it ends up he is not blood-related to us. He is a descendant of the brother of the husband of a daughter of Ferdinand Panther.
Regardless, he is interested in the family and has some old photos. I believe at least one of them is of the daughter of Ferdinand. He also has an old military photo that he believes could be of Moriz Panther. Moriz was the brother of Aloys and Ferdinand who died on August 1, 1866 in the Battle of Hundheim at the end of the Austro-Prussian War. He photocopied the photo and snail-mailed it to me. This discussion reminded me of a military portrait I received while writing my Panther family history book.

Several years ago, I had been given a scan of an old German military portrait from someone descended from the Traub family in Moesbach, Ortenaukreis, Baden, Germany. They believe the man in the photo is a Traub relative. I've had this in my collection for several years but I haven't done anything with it.

While I was waiting for the above photocopy to arrive, I posted a copy of it to the "German Genealogy - Just Ask!" and "Random Acts of Genealogy Kindness" groups on Facebook. I asked if they could help me narrow down the identity of the man by helping me identify the time-frame, rank and location of the man's military service. I'm telling you, if you have any questions regarding your genealogy, you must post your questions to the appropriate group on Facebook. People are in these groups that want to help and will surprise you in what they can find!

Here's what we found out about this photo: 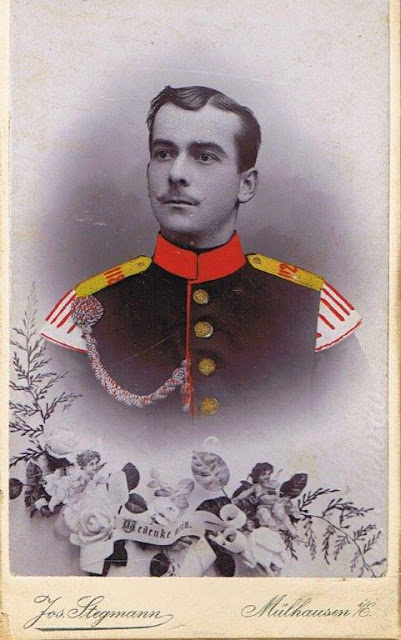 The photographer was in Mulhaus, France. The yellow shoulder straps show that the military unit was the 4th Battalion Badisches Infanterie-Regiment Prinz Wilhelm Nr. 112. This regiment was stationed in Mulhaus from 1872-1877 and from 1890-1914. Based on the style of the photo and hair style, it is believed it was taken between 1870 and 1875. Using the regimental dates, this means the photo must have been taken between 1872 and 1875. The medallion shows the man was a sharp-shooter and the shoulder pads show that he was a musician.

1872-1875, sharp-shooter, musician, Infantry Regiment 112 stationed in Mulhaus. This is about 90 miles down the road from where the Traub family was from. It still doesn't tell us who it is, but look at everything we learned just by posting a question to two Facebook groups.

The photocopy of the photo arrived in the mail today. Here it is: 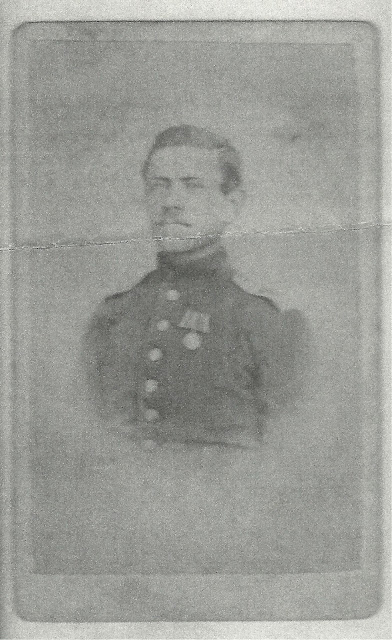 I posted this with questions about the region, unit, rank and time-frame to the "German Genealogy Just Ask!" and the "Random Acts of Genealogical Kindness" Facebook groups. The answer that came back is astounding to me. The people in these groups that know their old photographs and military uniforms said they thought it was from the Austro-Prussian War.

Could this actually be Moriz Panther? I don't know for certain but the possibility is there. If true, it's amazing! I will definitely be paying a visit to the person that sent me this to get good scans of all of his old photos.