During my latest trip to Iowa, I was able to scan in every page of three of my grandmother, Elizabeth Menke Panther's diaries. This is my mother's mother. These were from the years 1968, 1973 and 1977. Now that I'm home, I working on getting the pdfs created with these scans turned into jpg files and cropping them down to the individual pages. While cropping them, I'm scanning them for important events. I know I'm not catching all of them this time through. I'll look through them more thoroughly once I get them organized. Still, a couple of very important events leaped out at me from 1968. Add in the fact that this was 50 years ago and these take on greater significance.


First is the entry for the death of my grandmother, Julia Doran Miller, my father's mother, on May 10, 1968. 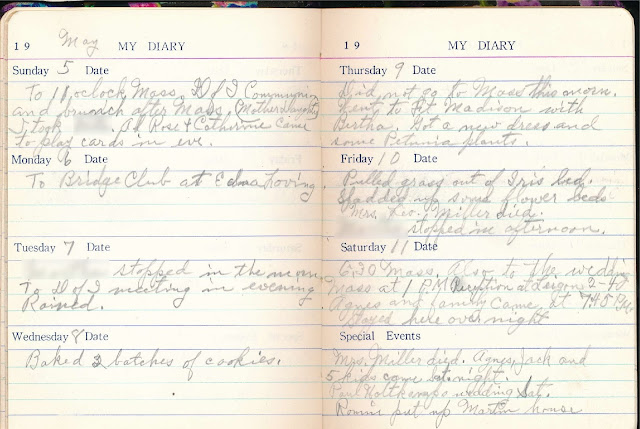 It is noted in the days after her death of the arrival of my parents, listed here as "Agnes and Jack", along with their kids, including me. I was too young to remember any of these events. Looking at later dates, you can see that we headed back home to Nebraska on May 15. Also of note is multiple tornadoes that struck in various locations in Iowa on the 15th, killing 14 people. 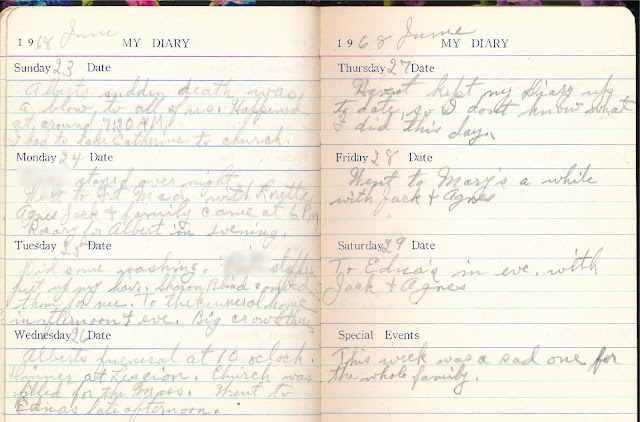 As would be expected, you can see Grandma's notes that his death "was a blow to all of us" and that the week "was a sad one for the whole family". He died when he was just 48 years old. It is currently believed that he had Marfan Syndrome, resulting in his long limbs and tall stature. It would also be the cause of his heart failure at such a young age.

Putting these together, I can only imagine how my parents felt in the spring and early summer of 1968, with Dad losing his mother and Mom losing her brother in such a short span of time. Add in that they had seven children including three under five years old, making two long road trips with the children in tow. Grandma noted that one trip home took "only 6.5 hours". That was really good time in those days. It would be how long you'd expect the drive from West Point, Iowa to Columbus, Nebraska to take today, with higher speed limits, safer cars and four lane highways. Back then, with no one wearing seat belts, all the roads were two lane only, passing through every small town along the way, I'm thinking Dad may have had a "lead foot" on the drive home.