Born on the 4th of July

While browsing the Warsaw, Illinois newspaper archive, I found another version of obituary for Thomas Doran, my great-great-great-grandfather and the eldest of my known Doran family, who lived out the final years of his life and died in Carthage, Illinois. I had previously found an article from December 1, 1875, stating that he was in poor health and was said to be over 100 years old. 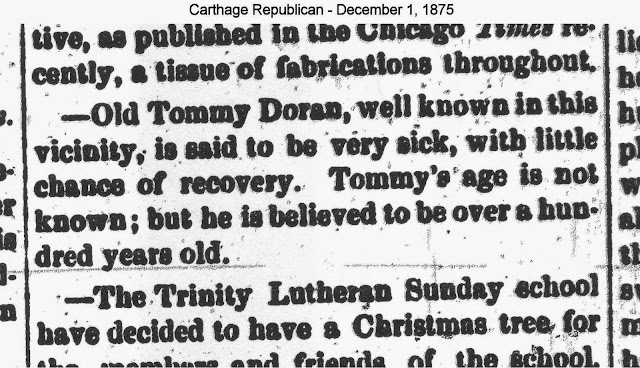 I later found an obituary for him in the Warsaw Bulletin on January 1, 1876 stating that his age is uncertain. It says he claimed to be over 100 years old but it appears the writer of the article didn't believe him. 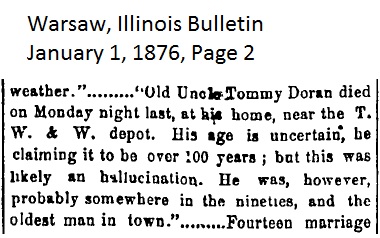 Recently, doing some more searching in the Warsaw, Illinois newspaper archive, I found the following article: 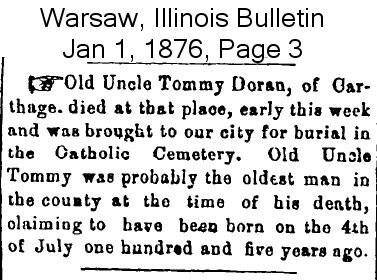 Here it states that he claimed to have been born on July 4, 1771. Now, of course, I never knew Old Uncle Tommy Doran, or his wife, Catherine "Kitty" "Granny" Doran or the rest of the family, but based on what I've read about them, I tend to believe that Old Uncle Tommy was a big talker. I can almost picture him, given the anti-Irish prejudice that existed until the 20th century, if someone gave him grief for being Irish, that he said something along the lines of, "Irish? I'm American! I'm so American I was born on the 4th of July!" I also tend to believe he was telling people he was born on the 4th of July, 1776 but he or the writer of this article got their numbers confused. Yes, this is all pure speculation at best. Really, it's just wishful thinking that I know what happened regarding his birth date and what he told people. But I still think it's a very real possibility that he acted like this.

Regardless, if we take this last article and Old Tommy's word for it, that would mean that tomorrow is Old Uncle Tommy Doran's 247th birthday. Happy Birthday Great-great-great-grandpa Tommy!

Posted by Matthew Miller at 4:23 PM