I barely knew my grandfather, Leo Miller. He passed away when I was in my single digits in age. My family traveled to the area he lived about once per year. During those visits we spent most of our time with my mother's family since we had many cousins around our age on that side of the family and only a few on my father's side. Since starting my genealogy hobby, I've slowly learned more about him and now feel I know a lot about his life, although there are many details still missing, such as details about his military service and the interactions that had to be tense regarding the home he lived in much of his adult life. Here's what I know.
Leo Henry Miller was born on October 3, 1895 in Fort Madison, Lee County, Iowa. When he was born, his parents, Charles and Philomena Bixenman Miller already had two daughters, almost four year old Anna and just turned two year old Crescence. His parents were married on April 14, 1891, in Wien, Chariton County, Missouri, and almost immediately moved to Fort Madison, Lee County, Iowa, where all of their children were born. After Leo, his parents had two more children, Carl in 1897 and Cecelia in 1903. They lived at 1915 Johnson Street.
Charles was a day laborer in 1900 and a coal chute foreman on the railroad in 1910. He worked for the railroad until his retirement.
Leo started working for the Santa Fe Railroad on August 10, 1910, when he was just 14 years old. He started as a coal thrower and six years later become a train engineer, working a switch engine in the Shopton switch yard in Fort Madison.
Leo served in The Great War. World War I. I have no details of his days in the service but he was awarded The Great War victory medal 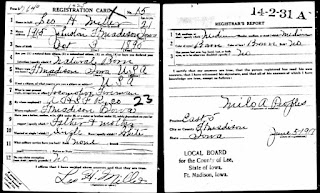 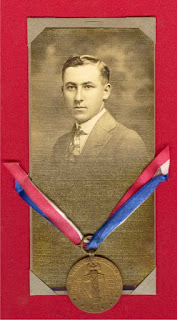 The story is that Leo, when he wasn't working, hung out in downtown Fort Madison, apparently standing at a corner, just wasting time. Every day at the same time a young lady would walk by on her way to work. Leo wasn't much of a talker but would always smile and say "Hello". One day the young lady said the telephone company where she worked was having a benefit and all employees were asked to sell tickets. She asked if he would buy one. He said he would but only if she went with him. What a sale! That was the beginning of their courtship. Her name was Julia Doran. She was the daughter of Tom Doran and Mary Ann Kelly. 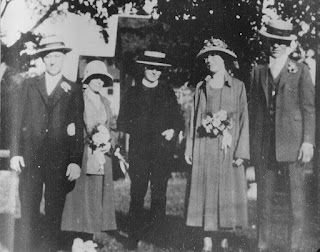 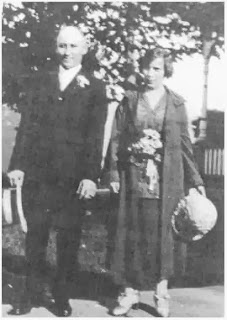 Leo's sister Crescence married William Deverman in New York on November 8, 1918, and moved to Denver, Colorado. His father Charles passed away on October 20, 1923. His sister moved to Mazenod, Saskatchewan, Canada and married Benedict Seeman in 1925 and his sister Cecelia married Lloyd Bowen in 1925.

Leo and Julia were married at Sacred Heart Catholic Church in Fort Madison on June 17, 1925. They lived in the home of Julia's father. Her mother had died in 1922. Their first child, Thomas Patrick, was born on October 10, 1926, followed by Leo Henry II on November 18, 1927.
The evening of Sunday, March 18, 1928, little 17 month old Thomas fell ill with what was diagnosed as meningitis. The next morning Leo's little Tommy died. Leo carried his son out of the house himself, placing him into the car to take him to the funeral home. He was buried the following day. 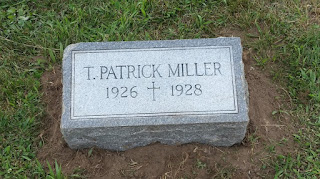 A little more than a year later, on June 16, 1929, Julia gave birth to another son, John Anthony Miller, my father. Daughter Cecelia arrived December 18, 1930 and finally their youngest son Norman Eugene, was born on October 19, 1932.


When Julia's father passed away in 1936, the house was left to Julia's sister Mamie, but Leo and Julia remained living there. Mamie never married. She and Leo's family continued living in the same home.

The younger Leo married Anita Mae Johnson and moved to the Kansas City area. John married Agnes Panther, from near West Point, Iowa and a short time later moved to Nebraska. Cecelia married Melvin "Baldy" Baldwin and remained living in Fort Madison, about a block away from her parents.
In 1962, Leo was given the duty of driving a steam locomotive, Number 2913, from the Shopton switch yard to its new home, on display at River View Park, next to the Mississippi River in Fort Madison, where it remains to this day. 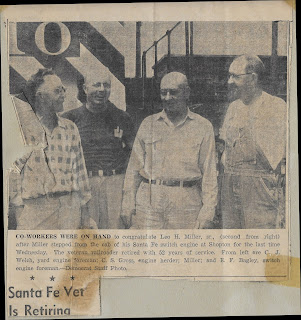 The week of August 20, 1975, Leo's son John and John's wife and children were in the area visiting. They left for home on August 24. On August 26, Leo passed away. He left behind four grown children and their families, including sixteen grandchildren. He was buried in the extended family plot in Sacred Heart Cemetery in Fort Madison. 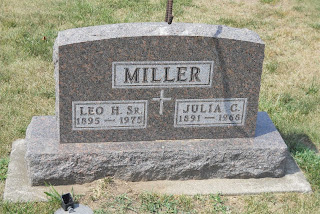 Posted by Matthew Miller at 5:43 AM