When I was in southeast Iowa in June, I spent an entire day at the Fort Madison public library genealogy room. While there, I printed out over 100 obituaries. I've been able to connect all except a few to my family tree. Here are the ones I found most important to my genealogy.

First, and most important, is the obituary of my great-grandmother, Mary Ann Kelly Doran.

I find it amazing that I haven't had obituaries for close relatives of mine and I don't realize it until I find them!


Next is Mike Doran, also known as Maurice. Mike is my granduncle and the son of Mary Ann Kelly Doran.

I also found a large number of obituaries for members of the extended Menke family. One of them is for little Miss Catherine Menke, who died of meningitis at the age of twenty-one years old.

I especially like the note of the town he was born in, Ankum, Hannover, Germany. It's a secondary source but lines up with where I know where the family was from.

Then we have the sister of my grandmother, Mary Menke. There are rumors milling around about the cause of her death but I will note only what is found in the documentary evidence.

She died of either influenza and/or peritonitis, which is an inflammation of the tissue lining your abdomen, usually caused by an infection.

The last obituary I'll list is that of my grandaunt, Veronica Panther. Veronica was the sister of my grandfather, Benedict Panther. She never married. She acted as the midwife for the birth of many of her neices and nephews and was the organist at St. Mary's Church in Dodgeville for many years. 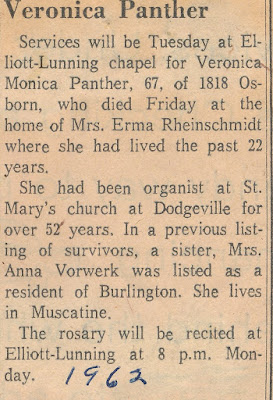 I recall it being said that my grandfather was irritated that the church charged the family to pay for the organist and/or choir to play for her funeral when she played the organ for free for so many funerals.

A few other items I found during my obituary crawl were:
The only item in the newspaper I've found regarding my paternal grandparents' wedding. 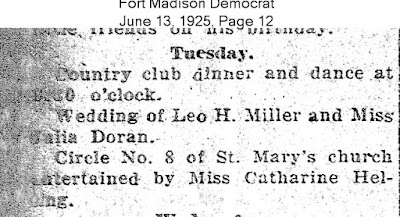 An article about my third cousin, Mark Panther, remembering his breaking the Big 10 javelin record in 1935 and the fact that the record still stood, 10 years later and that it would likely never be broken because that's when the Big 10 eliminated the javelin throw due to a large number of arm injuries. 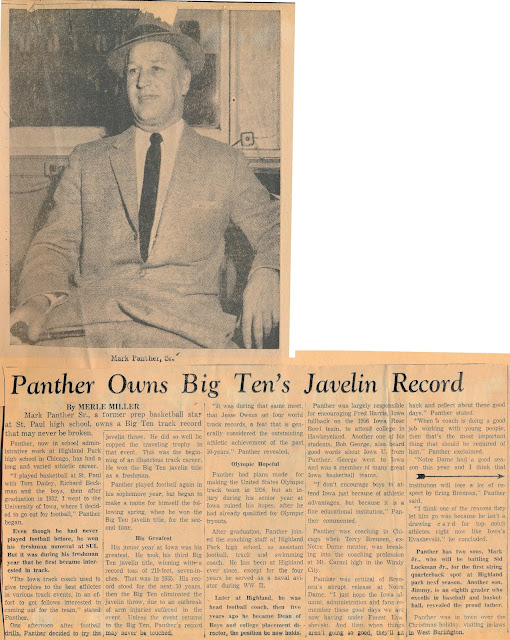