I've heard the family stories about the Menke family's voyage to America since I was a child. The story is that my great-grandfather was a young boy when he came to America with his parents and his father died on the voyage and was buried at sea. I had never found anything to document this. I only had the fact that I found my great-grandfather's baptismal record and his parent's marriage record in Germany, and the fact that his mother remarried in Iowa. I posted a photo of my great-grandfather on Instagram, taken on his 90th birthday, noting that the photo was taken in 1954.
One person commented that it was amazing that he was born before the Civil War ended. I replied with more of his story including the fact that his father died on the voyage and was buried at sea. This person commented like he hadn't heard anything like this and asked if I had any documentation about it. I had to respond that I had no proof.

I finally found it! Ancestry has a collection titled "Bremen, German Deaths of Sailors and Ship Passengers, 1834-1875" and in it I found this document: 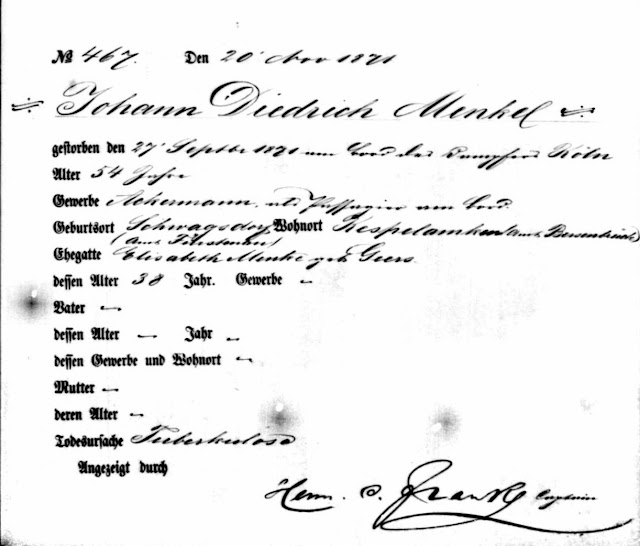 Note the date is September 27, 1871 when previously we had noted their voyage took place in 1872 but have not yet found the ship's passenger list. We can be sure it is him due to his wife's name being listed correctly, Elizabeth Menke geb (born) Geers. It also notes his birth location as Schwagstorf amt Furstenau and his residence as Bersenbruck, which is what we have noted for him. It lists his cause of death as tuberculosis.

The death record appears to be an index of people who died at sea and it does not list the ship's name so I'm confident this is a secondary source. Still, it is the best documentation I've found so far for his death. At least now I have a date range to search for the ship's passenger list. Little by little, progress is being made to document their voyage to America.

Posted by Matthew Miller at 6:08 PM