Today, August 14, 2020, is the 300 year anniversary of the massacre of the Spanish Villasur expedition, which occurred in the area of my hometown, Columbus, Nebraska. This is not something I recall learning about in any class in any grade in school. I know I don't have relatives associated with this event but I'm confident some people in town do. I know it's easy to ignore the historical markers you see every day when going about your day to day life but it might be a good idea to check them out at least once. What can you learn about your town that you didn't know before? Could your ancestors have been involved in the events?

I'll link to more thorough explanations of what happened to the Villasur expedition at Columbus but here's a basic rundown. The Governor of New Mexico sent Lieutenant-General Pedro de Villasur to lead a group of men onto the American plains to capture French traders to gain intelligence about French military ambitions in the area. Villasur had little, if any, experience with the Pawnee people of the area. He had used a member of the Pawnee Nation held as a slave to translate. They camped just south of the confluence of the Platte and Loup rivers, which forms the southern border of Columbus today. The night of August 13, 1720, this translator, Francisco Sistaca, disappeared from camp and the next morning, the Pawnee, in concert with members of the Oto Nation, attacked the Spanish camp. It's possible Sistaca informed them the best time to attack. Within minutes, virtually every member of the camp lay dead. Some members of the Pueblo Nation, who assisted the Spaniards, survived to tell the story. This was the end of Spanish influence on the American great plains.

This is an extremely interesting story and I can't believe I wasn't taught this at some point in grade school through high school. Today, this historical marker stands in Pawnee Park in Columbus, close to the location of the massacre. This photo is from history.nebraska.gov. 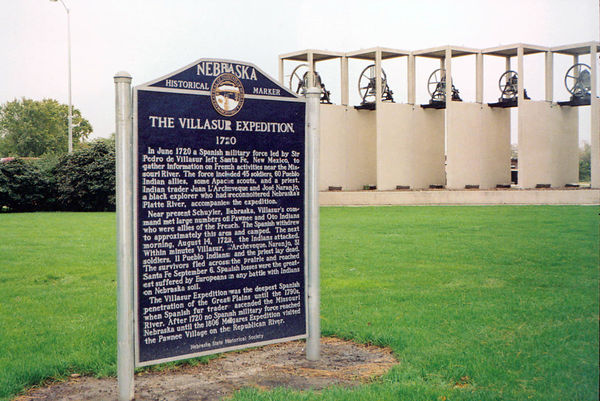 I could imagine how I would feel if I only discovered this event when I was an adult and any of my ancestors were involved in it. Go out and look at historical markers near you. You never know. You could stumble upon a piece of your ancestry!

Wikipedia article about the expedition: https://en.wikipedia.org/wiki/Villasur_expedition

The Nebraska State Government's web site has a blog called "Marker Monday". Here's the article about this marker: https://history.nebraska.gov/blog/marker-monday-villasur-expedition-1720

Newspaper article about the event and the marker in the Columbus Telegram in 2016: https://columbustelegram.com/news/local/mural-marker-detail-local-massacre/article_be8a0bf9-53b1-5359-902e-0e467275fd18.html

Finally, there is a detailed examination of the expedition found on the University of Nebraska - Lincoln web site: https://digitalcommons.unl.edu/cgi/viewcontent.cgi?article=1022&context=anthrotheses

Posted by Matthew Miller at 4:35 PM