Reininger Researching Coming to an End (For Now)

Back in January, Norbert Reininger asked about Ludwig Hodapp, who I showed as marrying Genovefa Ingert in 1862. His information had him marrying Mathilda Reininger, who was the daughter of Benjamin Reininger, Norbert's great-great-grandfather. It ends up we were talking about two different Ludwig Hodapps. Mathilde was the sister of his grandfather Remigius. He asked if I could look into the family of her parents, Benjamin Reininger and Amalia Möglich.

I don't have access to the later baptismal records of Ulm, Baden, Geramany like I do Mösbach but all of the earlier records were in Ulm so I have those. I used the birth dates that Norbert provided for them and began researching them in the latest Ulm records I have. The cutoff for my records is about 1800. I didn't have the baptismal records for Benjamin or Amalia or for his parents, however I did have them for Amalia's parents and for many branches of Benjamin's ancestors on his father's side. In the end, I was able to track down 93 of Norbert Reininger's grandfather's ancestors.

Norbert and I share a pair of ancestors, shown in this chart as Remigius' 5x-great-grandparents Simon Frischmann and his wife Jacobea Eldinger. Also shown in Jacobia's father, Hanss Eldinger. Unfortunately, we haven't yet connected his Panther ancestors to mine but given they were from the same vicinity as my Panther line, I'm very confident we're related on these lines also. We're also likely related on Baudendistel and Schindler lines, but given the number of families with these surnames in the area, our connection here could be quite a ways back.

Below is the ancestor chart showing the ancestors of Remigius Reininger, born September 14, 1856 in Ulm, Baden, Germany. 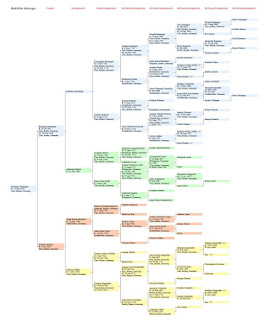 Posted by Matthew Miller at 12:35 PM No comments:

It was October, 1872. Thirty-five year old Aloys Panther was on the steamship Hanover with his wife of four years Monica and three year old son Maurice along with 722 other passengers, including 377 fellow Germans. Maurice was the Americanized spelling of the boy’s name, Moriz, who was named after Aloys’ father and brother. They had been at sea for over three weeks. They were getting close to their destination, New Orleans, Louisiana, America. What led him to leave the village of Mösbach his grandparents lived in for many years and the area near Achern his ancestors lived in for centuries?


Aloys was born in 1837 in the village of Mösbach, Baden, Germany to Moriz Panther and Elizabeth Birk. His younger brother, Michael died at the age of three when Aloys was just seven years old just a few months before his youngest brother Moriz was born. His father, Moriz, a police officer, died at the age of forty-three when Aloys was ten years old. His mother married his father’s nephew, Franz Anton Panther just a year later.  Aloys’ brother Ferdinand moved to America when Aloys was seventeen. We can guess he longed to follow his brother but thought it more practical to stay close to home. At the age of 24, he joined with Wendelin Bürck, Andreas Bürk, August Traub, Blasius Bürk, Christian Bohnert, Gabriel Schott, Moritz Weber, Konrad Rummel, Fabian Stretch, Alexander Sutter, Daniel Bürk, Wendelin Bürk and Anton Klump in establishing a brass band in their village.


When Aloys was 29, his youngest brother Moriz, who was a member of the Fifth Infantry Regiment, 8th company of the Baden Brigade, died at the battle of Hundheim in the Astro-Prussian War.


Two years later, Aloys married Monica Hanle, daughter of Sebastian Hanle and Magdalena Schmitt, also of Mösbach. His son Moriz was born a year later. The following year, a second son, Franz Haver died just three days after he was born, then Aloys’ mother died just five months later. Less than eleven months after his mother died, his third son was born. He named him after his brother Ferdinand who had gone to America eighteen years before. When this son died four months later, you could imagine Aloys had had enough. With only one sister and one brother left of his immediate family, he started making plans for America.


He left Mösbach on September 14, 1872, just one month after the death of his son Ferdinand, looking to follow his brother to a farm in Iowa. He and his wife arrived in New Orleans, Louisiana on October 12. Nine months later, their son Frank Ignatius was born. Not long after, they continued their journey up the Mississippi, settling in the Sperry-Dodgeville area of Des Moines County, likely near his brother Ferdinand.


Aloys and Monica had another son, Joseph, in 1875. Monica died in 1877 at the age of 35 and Aloys married Elizabeth Dunzinger.


Alois and Elizabeth were farmers. They were very active in their faith and attended St. Mary's Catholic Church in Dodgeville faithfully. Many of their children sang in the choir and their daughter Veronica played the organ. The boys were among the parishioners that helped to build the new church in 1901.


Their oldest son, Maurice married Mary Frances McCarty in 1900 and gave Aloys and Elizabeth their first grandchild, Hugh V. Panther in 1901, followed by Leo William in 1903. Frank and Frances had Bernadine Theodora in 1904, followed by Leona Anna in 1906. 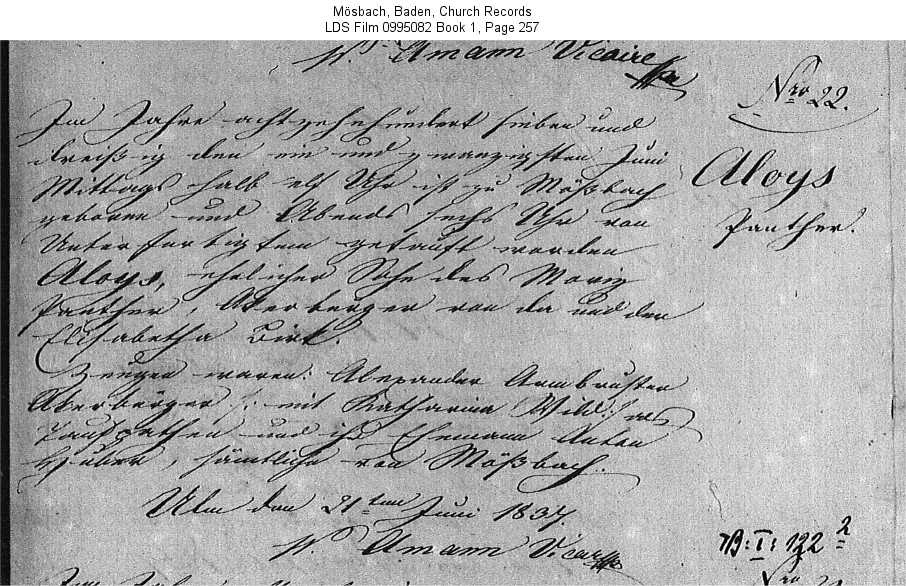 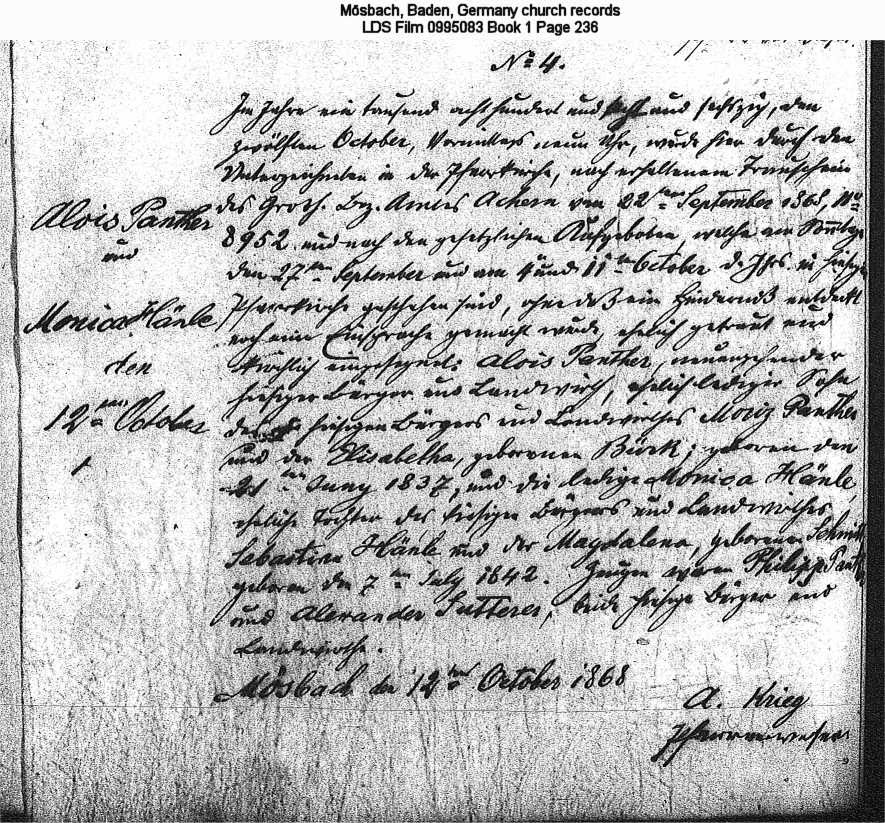 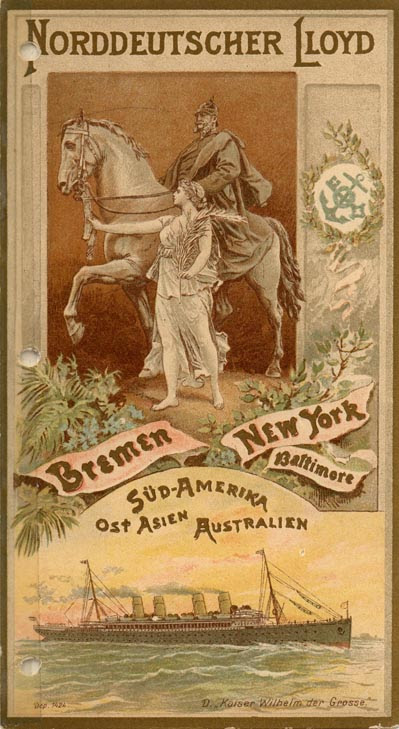 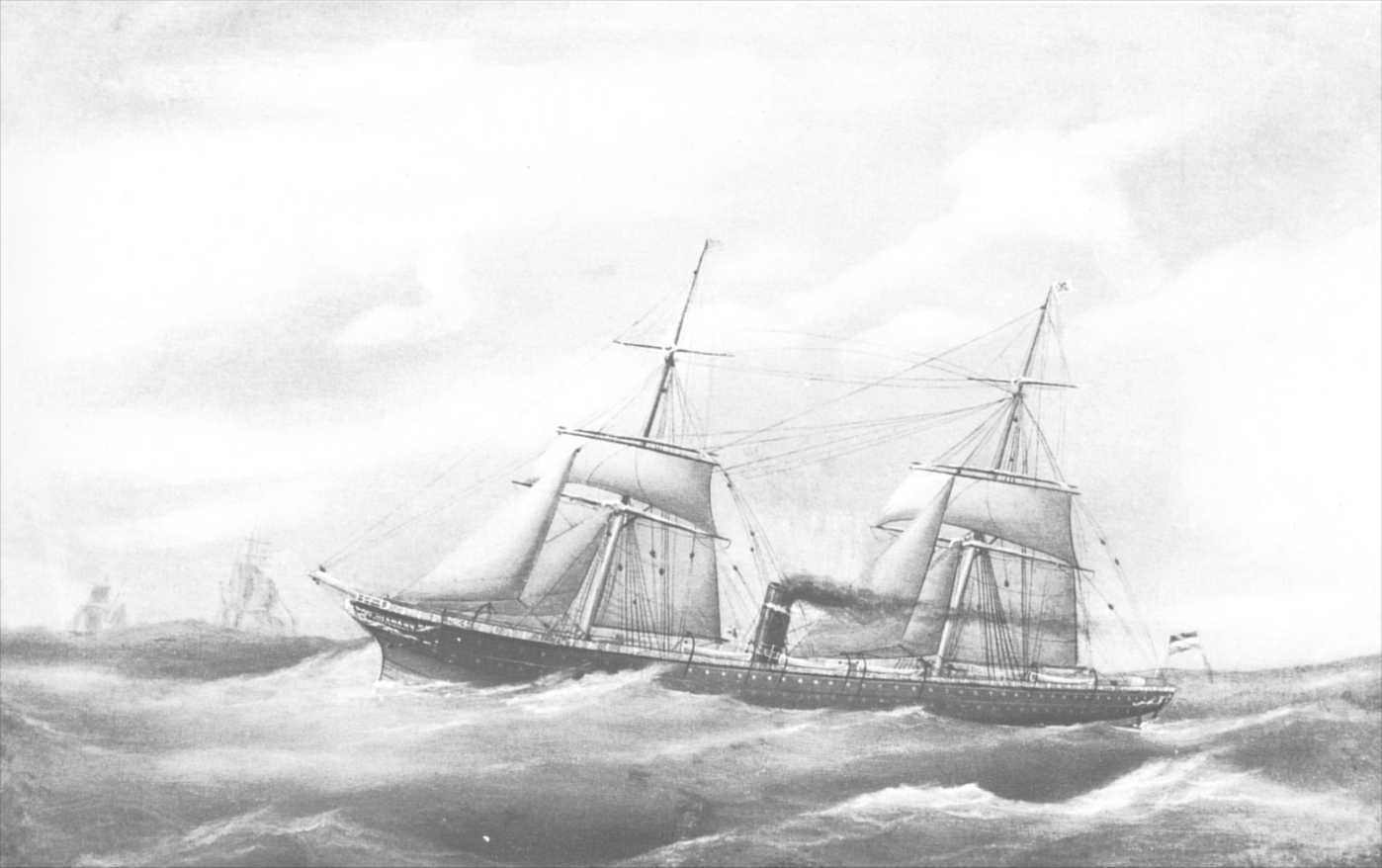 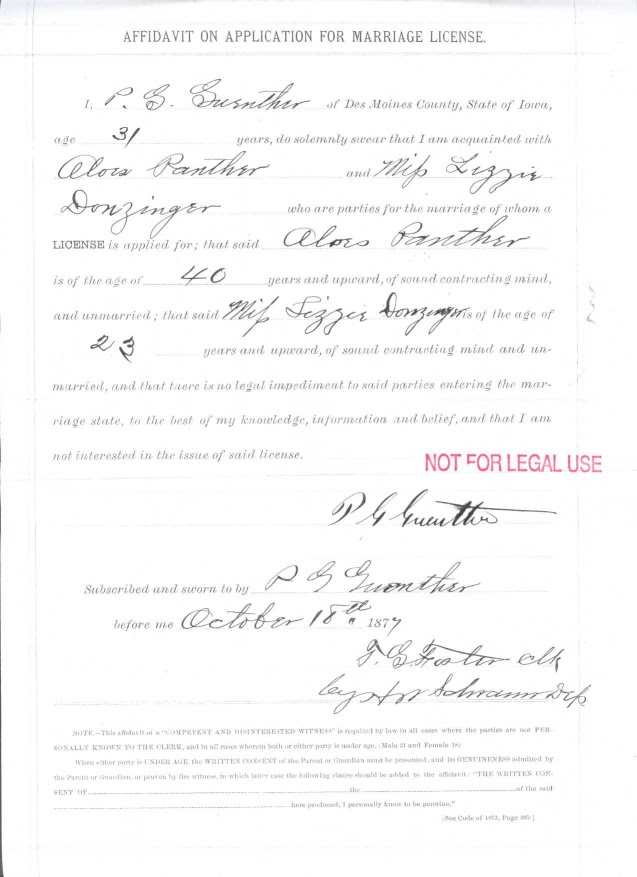 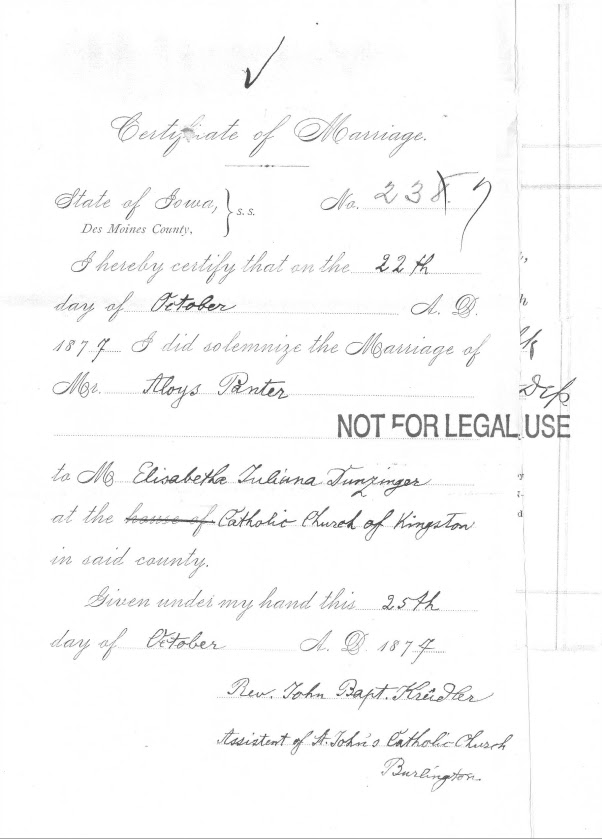 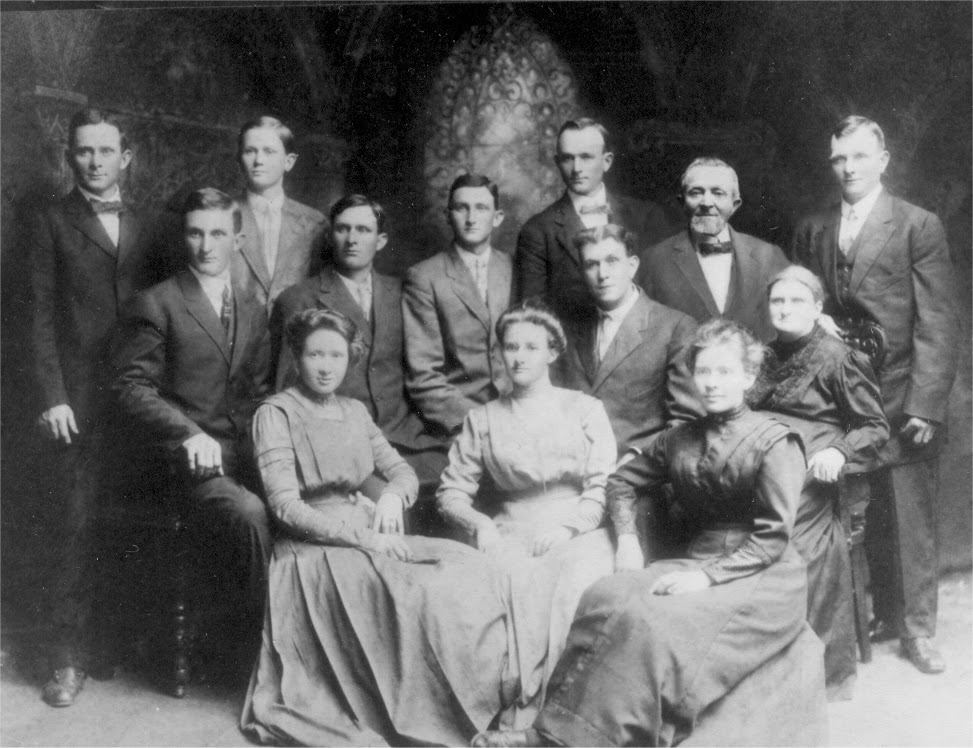 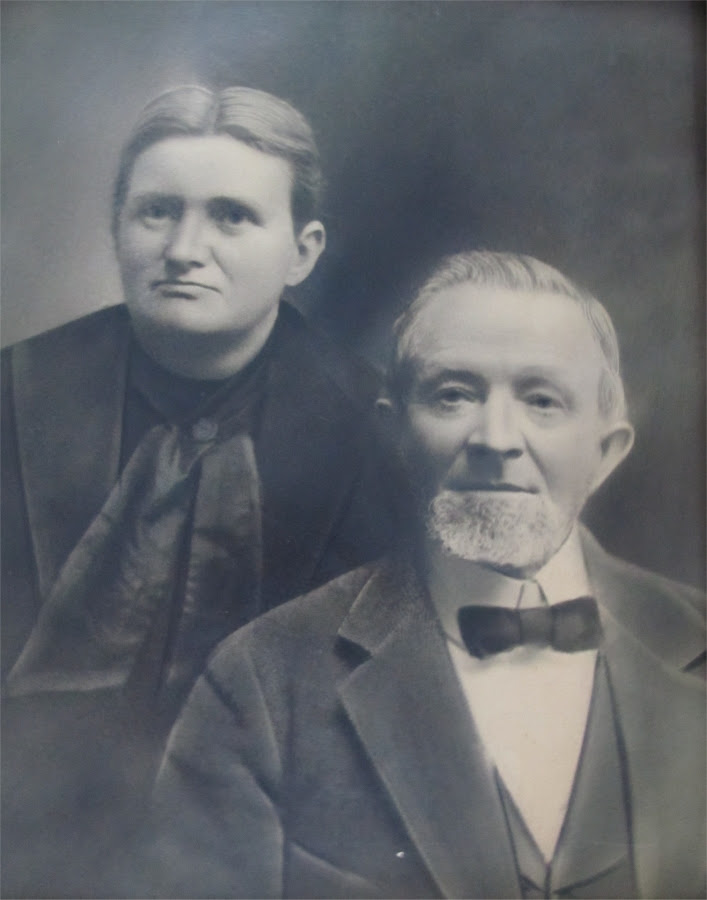 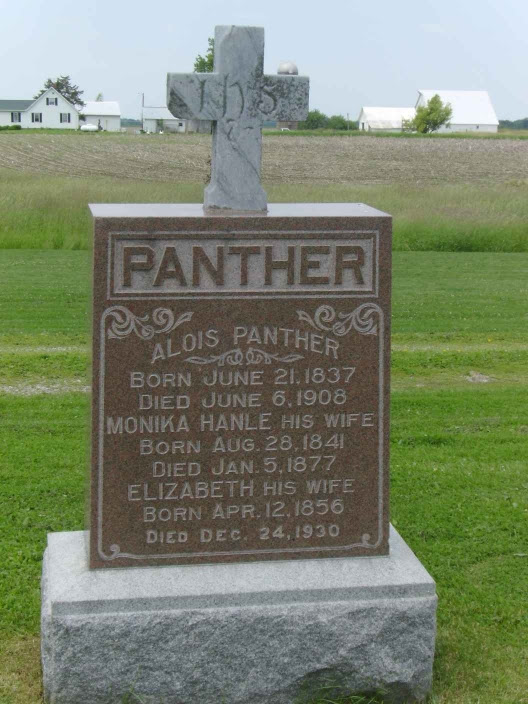 Posted by Matthew Miller at 10:03 AM No comments: