An updated article has been posted here.

﻿﻿﻿As anyone who has been aware of my genealogy research knows, my big mystery is my great-grandmother, Elizabeth Dunzinger. I've put a lot of time and effort into finding her, as you'll see in the evidence collected below.
I am going to list all the documentation we have on Lizzie (as she was known most of her life). I'm interested in your opinion. Does all this together consistute proof that we've found her parents? If not, where do we go from here to prove it? Please comment below or email me your thoughts. Thank you!

The family story passed down through the years says that Lizzie was born in New York in either 1854 or 1856. Her grandparents brought her to Burlington, Des Moines County, Iowa to live with relatives after her parents died when she was about three years old.

In this list, I will talk about only facts about the documentation and facts about what we know, not my beliefs on what is true. 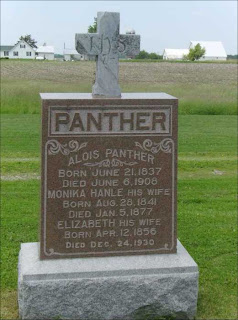 Her headstone, which she shares with her husband, Alois Panther and his first wife, Monica Hanle. In St. Mary's Cemetery, Franklin Township, Des Moines county, Iowa. It lists her birth date as April 12, 1856 and her death date as December 24, 1930. We know this is not the original headstone and her death date on the headstone is definitely incorrect. 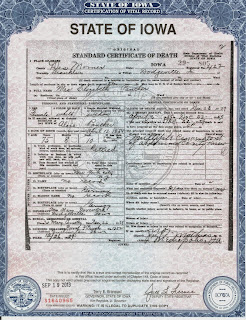 Her death certificate lists her parents as "Not known". It lists her birth date as April 12, 1854 in New York City. 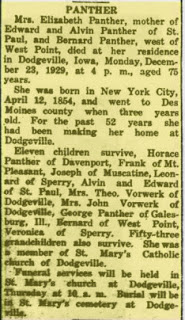 Her obituary was in the Burlington Hawk Eye on December 26, 1929. It states her death date was December 23, 1929. It also lists her birth date as April 12, 1854 in New York City. It does not list her parents. Information about her children contains errors. (Horace instead of Maurice and Bernard instead of Benedict as examples.) 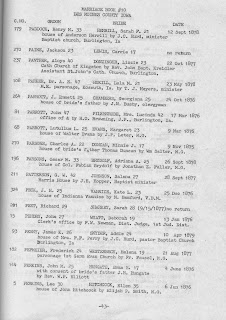 Lists their marriage on October 22, 1877. Lists her as 23 years old and lists her name as Lizzie Donzinger. 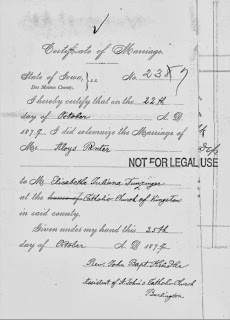 Lists her name as Elizabetha Juliana Dunzinger. It states the marriage occurred on October 22, 1877 at the Catholic Church of Kingston, Des Moines County, Iowa and was officiated by an Assistant Pastor of St. John's Church in Burlington.

There is not currently a Catholic Church in Kingston. I found a record of a St. Mary's Church, Kingston, Des Moines County, Iowa http://www.topozone.com/map.asp?lon=-91.0545892&lat=40.976703&datum=nad83 (N 40.9767 and W -91.05459). At these coordinates is an open area next to St. Mary's Catholic Cemetery, where you might expect a church to be located. At this point in time, I have not figured out where the old St. Mary's Church records might be stored.
Affidavit for the Application for Marriage License 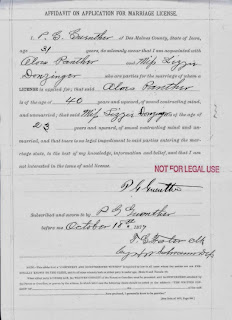 An affidavit signed by P. G. Guenther (see newspaper article, below), attesting to his acquaintence with Alois Panther and "Lizzie Donzinger" and that he sees no problem with their marriage. P.G. Guenther was the young Peter George Guenther, who was married to Margaret Victoria Ziegelmueller. 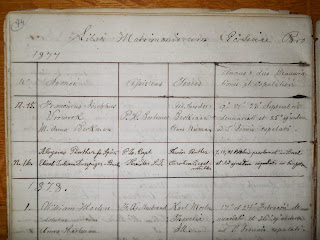 Lists the witnesses of her marriage as Theodore Panther (nephew of Alois) and Carolina Ziegelmueller. This proves Lizzie was close to at least one member of the Ziegelmueller family. 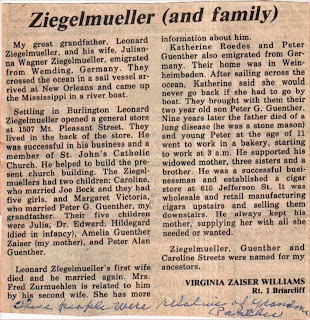 I do not know when this was published or in what newspaper but I would think it appeared in the Burlington Hawk Eye. There is a handwritten note in the bottom margin of the article, which we believe was probably written by Mary Ann Panther Vorwerk or her daughter that says "These people were relatives of Grandma Panther". This note refers to Lizzie Dunzinger. It states that the Ziegelmuellers and Wagners came from a town called Wemding in Bavaria. The article also mentions the Guenthers including a young Peter G. Guenther. 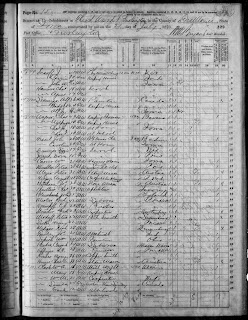 Shows Lizzie Dunzinger, 17 years old, working as a servent and living in the Charles Wagner household. 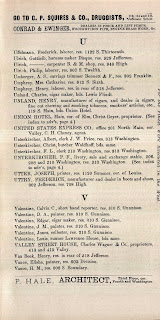 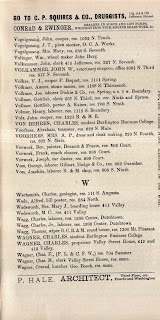 Church baptismal records of the children of Leonard Ziegelmueller and his wife, Juliana Wagner. 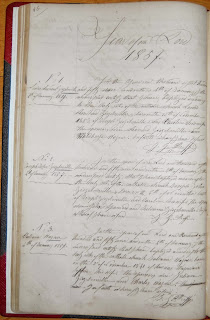 Many of them show Charles Wagner and his wife Walburga as the sponsors. I don't have an image of the church record but a researcher in Wemding has confirmed they were married September 11, 1843 in Wemding, Bavaria. 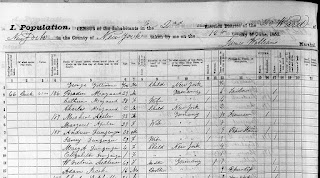 Listing the couple Andrew and Fanny Dunzenger, both born in Germany living in New York City, New York County, New York in Ward 20, Enumeration District 2. Also listed are their two daughters, Mary A. Dunzenger, 4 years old, and Elizabeth Dunzenger, 1 year old. Andrew's occupation is listed as a "paper stainer". This shows the age of Elizabeth matching up with the age of our Lizzie. 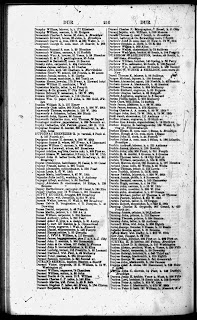 Has a listing for: Dunzinger, Andrew, paperstainer, h. 329 Seventh av.
Andrew Dunzinger is not found in the 1857 or 1858 New York City Directory. Names surrounding his in the 1853 directory are found in these other directories but not his. This tells me the deaths likely occurred in either 1855 or 1856. 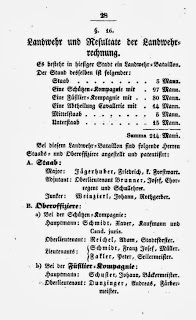 Lists an Andreas Dunzinger listed as an Oberlieutenant in the local militia. It shows his occupation as Faerbmeister. This translates along the lines of master dyer. He would be too old to be the same Andrew Dunzinger found in the 1855 New York census but he does have a son named Andreas that would be approximately the correct age. The church records of Wemding list his occupation as a tinctor, which is a dyer.

What don't we have?

So, what we have is a lot of circumstantial evidence that my great-grandmother was born April 12, 1854 in New York City, New York County, New York, to Andrew and Fanny Dunzinger and that she had a sister named Mary A. Dunzinger and a grandmother named Victoria Seidlinar (or something similar) and that her father was born in Wemding, Bavaria to a master dyer named Andreas Dunzinger and his wife, Maria Francisca Leinfelder, along with their family history there, which is waiting for us to delve into.


Is this mass of circumstantial evidence enough to constitute proof that we've found my great-grandmother's family? Does it fall short of that but still make it likely we have the correct family link? Where do I go from here? No matter what, I'll still hope to find more concrete evidence proving this connection. The question is, do I turn my focus to the family history in Wemding or would that be a waste since this connection isn't yet proven? The research in Wemding will not be easy. The records are not digitized and if they are microfilmed, they are only available in Eichstatt, which is near Wemding in Bavaria. A trip there will cost a lot of money. Paying a researcher to look for me will also cost a lot of money and I also wouldn't have the satisfaction of doing the research myself.

Please let me know your thoughts. I'd really appreciate it!