It is Memorial Day weekend. Be sure to take advantage of Ancestry's offer of free military lookups! You can find it here: http://www.ancestry.com/cs/us/memorialday2014.

You will need to sign in to Ancestry to view the records but you can do this with a free account. Enter your search parameters. As always, start with a more wide search. Put more details in if you get too many results. 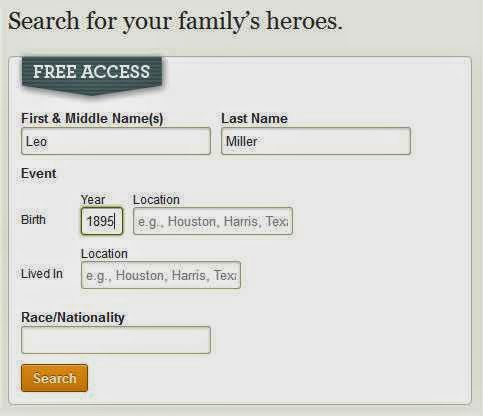 Read more »
Posted by Matthew Miller at 9:32 AM No comments:

My surname is Miller. It is believed my great-grandfather was known by the surname Müller at least until he came to the United States. We have reason to believe one of his brothers went by the surname of Müller even after he came to America. In my experience looking through the record books of Catholic churches in a few villages in Germany, it appears that Müller is essentially just an alternate spelling of Mueller and Miller. It doesn't appear there was any intentional or accidental name change when my great-grandfather, Charles Miller (aka Karl Müller) came to America. It is my belief that he just started spelling it this way and that's the way his children ended up spelling it. Regardless, I'm sure that should we find his baptismal record in Germany in any of these spellings, I know I'll recognize the family.

Charles Miller was extremely secretive about where he came from. He said he was on the run from the German military and if they tracked him down, he would be treated as a deserter. Grandpa Leo H. Miller Sr. said he was confident he had relatives in Germany but he had no idea where.

Highlights from a Genealogy Class

From my years of at least weekly visits to my local Family History Center, many members of The local Church of Jesus Christ of Latter Day Saints (LDS) have come to know me and respect my knowledge of genealogy research. Because of this, the Bishopric of the local church asked me to teach a weekly genealogy class for their members. The class ultimately was more of a workshop with me helping about six people interested in their genealogy with online research. Let me tell you, the fact that every person's genealogy research is going to be completely different makes it quite a challenge to help six different people get started with online research. I essentially had to make five people wait while explaining how the first user should start, then move on to the second. When I was about halfway through helping the second person, the first person had found that he didn't find anything on his initial search. It was a pretty hectic hour but I hope that I helped everyone there at least a little bit. We'll find out next week with the next class.

Read more »
Posted by Matthew Miller at 10:01 AM No comments: