I got a message from a cousin on my Miller side, asking for what is currently known about the Miller family. Of course, that makes a perfect blog post. 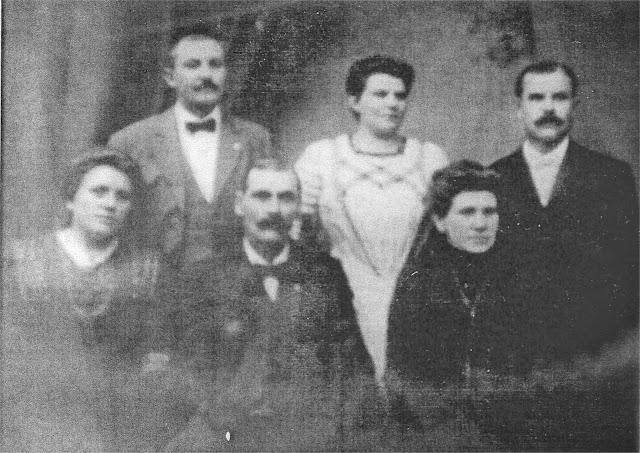 Not sure of order but Charles E. Miller appears to be in the front center. The rest are Gottlieb Miller, Annie Miller Quenzer, Sophia Miller Schmalzl, Rika Miller Susenberger

Read all the known details by clicking the Read More link:

Born Karl Müller. According to stories passed down in the family, Karl entered Germany's army. Karl deserted the German army and fled to the United States in 1874 and settled in New York where he lived for a time.

Cecelia Miller, his granddaughter writes in 1997:
"Though we would often ask Dad (Leo Miller I) about his ancestors, all he could tell us was that his father, Charles, ran away from the German army, came by boat to the United States and changed his name from Müller to Miller. He (Leo) often said that he thought he still had relatives back in Germany somewhere, but had no idea where. He said his father never wanted to talk about his German relatives, afraid that if the German officials found him, he would be treated as a deserter."

Charles E. Miller was naturalized five years later in 1879. He later moved to Wien, Missouri where he took up farming. He met Philomena Bixenman who had moved there with her family from Lake County, Indiana. 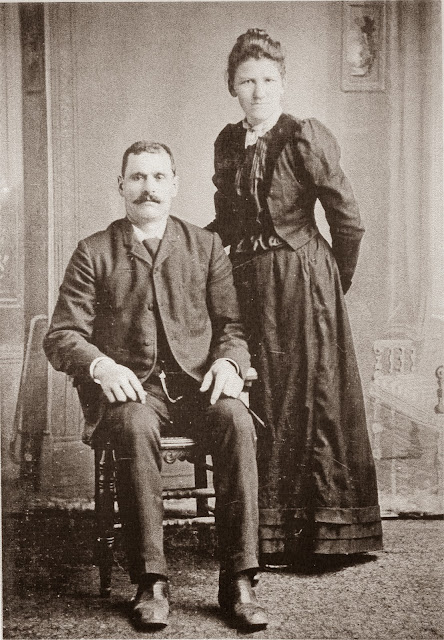 The family lived on Charles' farm for a few years. Although German was their first language, both Charles and Philomena spoke English as well.

Around 1892, Charles and Philomena moved to Fort Madison, Iowa and lived there for the rest of their lives. They belonged to St. Mary's parish.

Charles became a foreman on the Sante Fe Railroad which is noted in the city directory in 1902. The entry reads: "Miller, Charle E., wks S Fe, r 1915 Johnson" 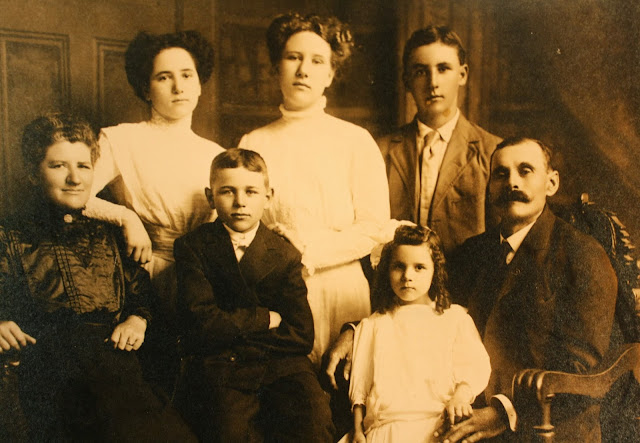 Charles was buried in the family plot in the Sacred Heart Cemetery. He still had black hair when he died. Rootsweb lists his burial as: Miller, Charles E. 10-7-1852, Germany to 10-20-1923; Oakland cem, Ft. Madison.

Charles E. Miller, for 33 years a well-known citizen of this city, answered the final summons at his home, 2132 Des Moines Street early this morning. The deceased was in his 71st year, having been born in Germany October 7, 1852.
Thirty-three years ago he came to Ft. Madison and has been a resident of this city ever since. A member of the Sacred Heart Church of this city and of the A.O.M.W., he is known to a large circle of friends who will be grieved to learn of his passing.
With his wife the following children survive: Miss Anna Miller of Mazenod, Saskatchewan, Canada, Mrs. William Deverman of Denver, Colorado, Leo H., Carl and Cecelia at home.
Funeral Services will be held from the Sacred Heart Church Tuesday morning at 9 o'clock. Reverend Fr. Peter Hoffman will officiate." 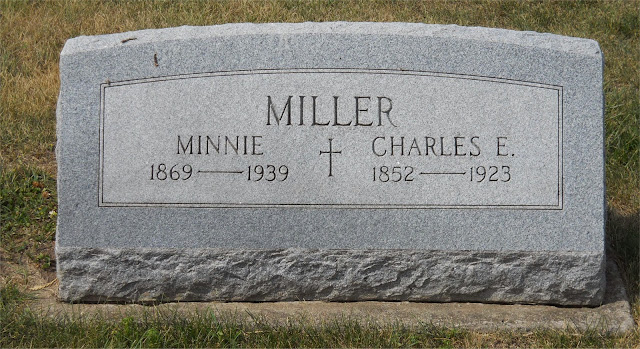 Charles married Philomena Bixenman, daughter of Benedict Bixenman and Crescentia Wolfgang, on 14 Apr 1891 in Wien, Chariton, Missouri. Philomena was born on 27 Apr 1869 in Lawrence, Lake, Indiana, died in 1939 at age 70, and was buried in Fort Madison, Lee, Iowa. 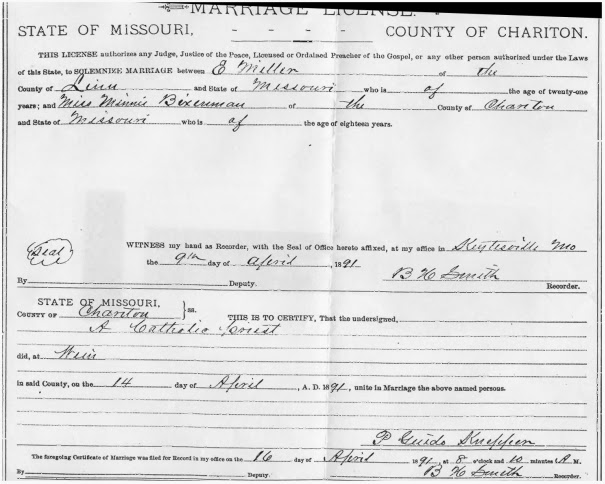 The original St. Mary of the Angels Church entry for this marriage reads: "April 14, 1891, I joined in matrimony, and Carolum Mueller and Philomenam Bixenman, witnesses: Casper Bixenman and Helen Kohne.

Anna was baptized in St. Mary of the Angels Church in Wien Missouri. Shortly after this, her family moved to Fort Madison, Iowa. They belonged to St. Mary's parish in Fort Madison. She appeared on the 1910 census in Fort Madison under her father's entry:
Anna, daughter, female, white, 18 years, single, born Missouri, father born Germany, mother born Indiana, speaks English, paper-folder at paper mill, works, can read, can write, does not go to school, no. of farm schedule 2;

She attended Sacred Heart School in Fort Madison. She worked in a paper mill folding paper and in a button factory, then apprenticed to a dressmaker for one dollar per week. Because buttons were in big, she made a fashionable dress with seven dozen buttons on it. They were double rows down the front, on the sleeves and everywhere they could be put. 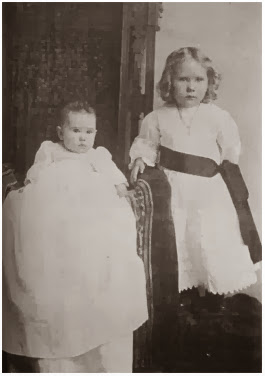 Anna and Crescence Miller in about 1893 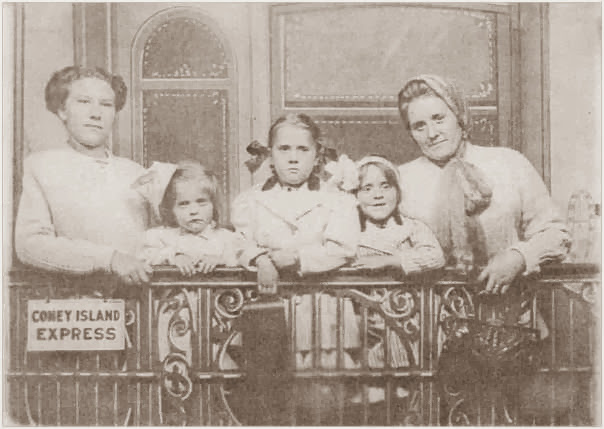 Mrs. Seaman is on the left, Mrs. Quenzer is on the right. The names of the children are unknown.

Anna also packaged shingles for a construction company. The girls would put their names and addresses on the shingles before the packages were sent out. She got an answer from one and wrote to him until he proposed, then she stopped writing.

From Fort Madison, Anna moved to Santa Rosa, California, probably with friends from Fort Madison. In the early 20's she went to Saskatchewan. She knew the Kesslars and worked there while Theresa was in the hospital at Mayos. For a time she worked in Stuart's store in Mazenod while living with McGurk's. She met Benedict Seemann in Mazenod.
It was probably while Anna was working for Kesslars that she renewed her acquaintance with Ben Seeman. After they married, they lived on the farm that Ben had homesteaded.

She took an active part in church life. She played the organ for church services.

Once their daughter Helen had settled in California, Ben and Anna visited her there in 1956. In 1960, they left the farm and bought Zado's former home in Mazenod. They sold the farm to Edward Seemann sometime during the early 1960's.

After the death of her husband, Anna remained in the house for the summers and rented it ot the Kraus family for the winter when she went to California. Sometimes she stayed with her sister-in-law, Ann Lunceford.

In 1970 she went to the Seniors Home in Assiniboia. She was visited there by her sister Crescence who came to celebrate her 90th birthday.

She attended the Sacred Heart School and then moved to New York to find work which she did in her uncle's clothes cleaning store. She met William Frederick Devermann who was going to Bentley Accounting School and who worked for the Texaco Gas and Oil Company. Shortly after the birth of their daughter, Crescense Cecelia, they moved to Malden, Massachusetts. Ten years after the death of William, she married Guy Hutchinson, a childhood sweetheart. There were no children of this second marriage. Crescence had a stroke and lived in a home where she could be cared for properly until her death in 1973.

Leo went to work on the Sante Fe Railroad when he was a boy of 14 years of age doing the heavy work of unloading train coal cars by hand. Leo worked and studied to become a brakeman, a fireman and a locomotive engineer for the Sante Fe, where he worked for 45 years. Some of these years were spent on the Missouri division taking him from Fort Madison to Marceline, Missouri and back. Some time was spent working on the switch engine in the Fort Madison shops. The last assignment given him before his retirement was to deliver an engine to its base for historic preservation in the Riverview Park area, donated to the city of Fort Madison. As of 2006, this engine can still be seen in the park there. On June 17, 1925, at 6:00 a.m. at Sacred Heart Church in Fort Madison, Leo married Julia Cecelia Doran. Their attendants were Leo's sister and brother, Anna Miller and Carl P. Miller. Their daughter Cecelia told this story:
"When asked how they met, they told how Julia would walk to work and often would have to walk past Leo who was always standing in front of a store or on a street corner on his day off from his job. He was not much of a talker, but would always say "Hello". Then one day there was a Telephone Company benefit party coming up and each employee was to sell tickets to the affair. That time when they met and said "Hello", Julia asked if he would be interested in buying a ticket. Leo responded, "I'll buy one if you will go with me." What a sale! That was the beginning of their courtship.

Carl was a railroad engineer for the Sante Fe Railroad. He had no children. The following information was from his voter registration card dated September 1, 1928:

Carl retired early with disability due to bad eyesight and after his divorce, moved with a trailer to Phoenix, Arizona, where he helped take care of horses on a ranch. He was afflicted with kidney problems and died in a hospital there. Durning the autopsy he was found to have cancer of the kidney which had spread. His brother Leo travelled out to Arizona by train to claim the body and brought it back to Fort Madison where his funeral was held at Sacred Heart Church and he was buried in Sacred Heart Cemetery.

Cecilia attended both grade and high school in Fort Madison Iowa. She also sent to secretarial school. When she met Lloyd Bowen in Fort Madison, she was too young to marry when he proposed. She went to San Diego, California by train and worked there for a time. Fort Madison's newspaper, the "Evening Democrat" had this notice concerning the marriage in San Diego:

"Bowen - Miller - The marriage of Lloyd Bowen of San Diego California and Miss Cecilia Miller of Fort Madison was solemnized Thursday evening, February 19, 1925 at the parsonage of St. John's Church. The couple was attended by Mr. and Mrs. R. Schmidt, aunt and uncle of the groom.
After the ceremony Mr. and Mrs. Bowen went to the home of Mr. and Mrs. Schmidt, 4722 E. Panorama Street, San Diego where they will make their home for the present.
Mr. Bowen was formerly a resident of Fort Madison, making his home with Mr. and Mrs. J.G. Bowen. He left about a year ago for San Diego, where he has a very good position with the Gas and Electric Company of that city. Miss Miller is the daughter of Mrs. C. Miller of Fort Madison and until her departure for the west, was employed as bookkeeper at the J.C. Penny Company store."
Cecilia worked as a secretary for many years. After Cecilia and Lloyd divorced, she married Phil Ericson. Cecelia married Lloyd Bowen on 19 Feb 1925. The marriage ended in divorce. Cecelia next married Phil Ericson. The marriage ended in divorce.

3.  Gottlieb Müller was born on 29 May 1868 in Germany. Another name for Gottlieb was William.

This is a possible birth record for Gottlieb Mueller, "Germany, Births and Baptisms, 1558-1898"

A restaurant called "one fish two fish" was at this location recently but is now closed and the building is vacant.

Here are two entries from the R. L. Polk & Co.’s 1918-1918 Copartnership and corporation Directory of the Boroughts of Manhattan and Bronx:

Annie married a man with the last name of Quenzer, first name unknown, in New York, New York. It is known that her husband was the partner of Gottlieb Müller in the cleaning business.

7.  Rika Müller. Her full first name might be Fredrika.

Rika married a man with the last name of Susenberger, first name unknown, in New York, New York.
I have microfilm of the baptismal records of Münchingen, Baden, Germany on order at the local LDS Family History Center. I expect it to arrive in the next few weeks. I'll be sure to update everyone on what I find.
I plan on making a similar post regarding the Doran/Kelly family soon.
--Matt
﻿
Posted by Matthew Miller at 1:50 PM