Did you know that today, September 27, is Ancestor Appreciation Day? I didn't either! In honor of this day, give a thought to your ancestors and what they did for you. 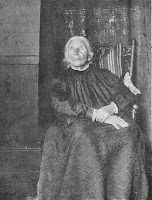 We are the chosen. In each family there is one who seems called to find the ancestors. To put flesh on their bones and make them live again. To tell the family story and to feel that somehow they know and approve. Doing genealogy is not a cold gathering of facts but, instead, breathing life into all who have gone before. We are the story tellers of the tribe. All tribes have one. We have been called, as it were, by our genes.

Those who have gone before cry out to us: Tell our story. So, we do. In finding them, we somehow find ourselves. How many graves have I stood before now and cried? I have lost count. How many times have I told the ancestors, "You have a wonderful family; you would be proud of us.". How many times have I walked up to a grave and felt somehow there was love there for me? I cannot say. It goes beyond just documenting facts. It goes to who I am, and why I do the things I do. It goes to seeing a cemetery about to be lost forever to weeds and indifference and saying - I can't let this happen. The bones here are bones of my bone and flesh of my flesh. 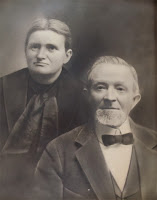 It goes to doing something about it. It goes to pride in what our ancestors were able to accomplish. How they contributed to what we are today. It goes to respecting their hardships and losses, their never giving in or giving up, their resoluteness to go on and build a life for their family. It goes to deep pride that the fathers fought and some died to make and keep us a nation. It goes to a deep and immense understanding that they were doing it for us. It is of equal pride and love that our mothers struggled to give us birth, without them we could not exist, and so we love each one, as far back as we can reach. That we might be born who we are. That we might remember them. So we do. With love and caring and scribing each fact of their existence, because we are they and they are the sum of who we are. So, as a scribe called, I tell the story of my family. It is up to that one called in the next generation to answer the call and take my place in the long line of family storytellers. That is why I do my family genealogy, and that is what calls those young and old to step up and restore the memory or greet those who we had never known before."
Posted by Matthew Miller at 3:57 PM No comments:

Email ThisBlogThis!Share to TwitterShare to FacebookShare to Pinterest
Labels: Genealogy

I received an official certified copy of Elizabeth Dunzinger Panther's death certificate from the State of Iowa Department of Vital Records. 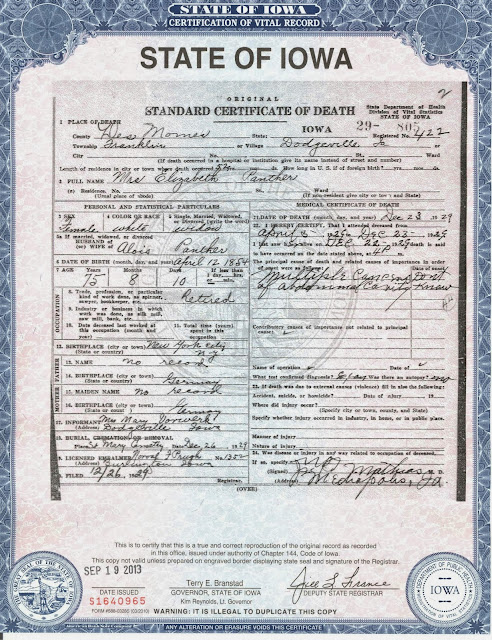 On the certificate, you'll notice that her father and mother are listed as "No record". It lists her birth date as April 12, 1854 and her birth location as New York City, New York. I believe this lends a little more weight to the argument that the Elizabeth Dunzinger found in the 1855 New York state census is her, but doesn't yet confirm it. I have a request in with the State of New York Department of Vital Records for a birth record of Elizabeth Dunzinger born on April 12, 1854. Prior to 1857, the records are not indexed and they require an exact date to search. I submitted April 12, 1854 as her birth date to them about two weeks ago. They say they respond in 6-8 weeks. We'll see what they can find for us.

Doing a bit more thinking about Elizabeth's life, I suspect we will find very little about her in the records of St. Mary's in Dodgeville (stored in West Burlington) but I do have someone there taking a look for me. I think it's more likely we'll find information about her early life at St. John's in Burlington. I have an appointment set up to view their original church books in about a week and a half. You know I'll be enjoying that visit! While the trip is still not set in stone, the current plan is to bring my mother to visit her sisters October 3-6. I plan on visiting St. John's to view their records on that Friday. You know I'll let everyone know what I find.

Lesson: Even if you think you've looked everywhere for the elusive ancestor's records, re-read everything you have on them. Really think about where you'll find something about them. All this time, I've been focusing on Dodgeville's records when in fact, we should be able to find her in Burlington's records. Close to each other, sure, but they are not the same jurisdiction. I'm hopeful I'll find a little more about her at St. John's Church in Burlington, then, hopefully, find her birth record on the correct date in New York City.

--Matt
Posted by Matthew Miller at 6:22 PM No comments:

High school annuals can make a great source of genealogical information. While my parents families originated 350 miles from where I was born, it was still interesting to look through the old annuals. I was back in my home town of Columbus, Nebraska, browsing through an antique store and stumbled across a few old high school annuals. I flipped through them and when I saw one particular student, especially the trait he was tagged with, I had to buy it. Here is the cover of the 1929 Kramer High School Annual: 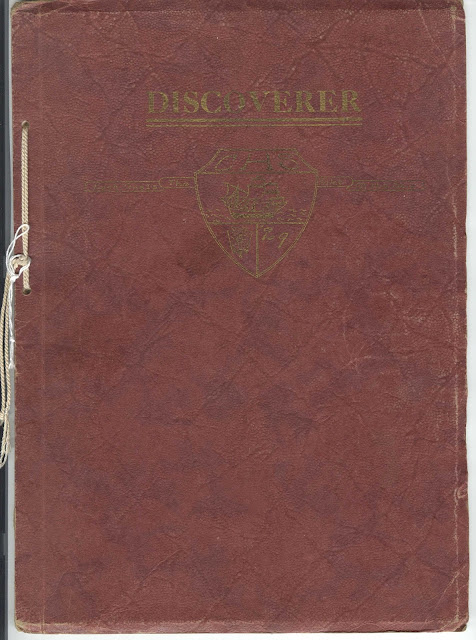 The student body was known as "The Discoverers", as the school now known as Columbus High School is known today.Here is the title page: 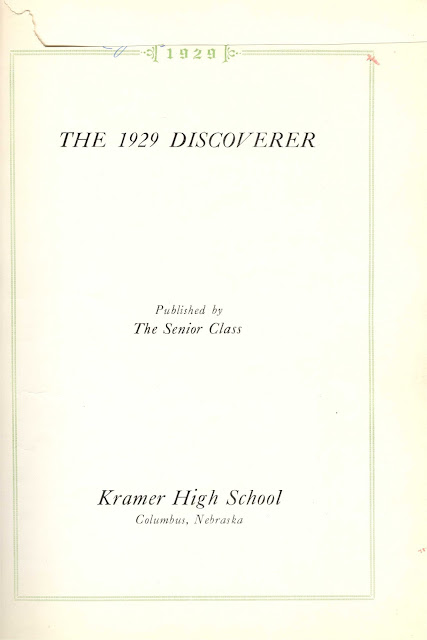 It appears the original owner wrote their name across the top of the title page and either they or their descendants cut/tore it out before it ended up at the antique store. The entry I found interesting is found on page 7: 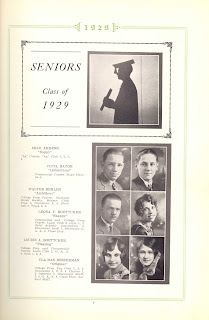 In the 1929 graduating class was a student by the name of Walter Behlen. He is noted as "Ambitious". If you're not familiar with Columbus, this may mean nothing to you but if you know the town, you know that one of the big manufacturing companies in town is known as Behlen Manufacturing. They are best known for manufacturing corrugated steel grain bins. These bins are found all around the midwest and other areas. They employ about 3.5% of the population of Columbus. It was founded by Walt Behlen in 1936, just 7 years after his high school graduation. His first product was steel toes for work shoes and clamps for wooden egg crates, manufactured in his garage.

I recall a book on my father's bookshelf titled "Walt Behlen's Universe". Ambitious? I'd say so!

Do you know anyone that might appear in the 1929 Kramer High School annual? If so, drop me a line and I'll get a scan of their photo for you.

Look for high school and college annuals to see if you can find more information about your ancestors. I'd bet you can gain a little more insight on them as a real person.
Posted by Matthew Miller at 12:25 PM No comments:

I've heard of some genealogy bloggers talk about cousin bait. This is where you put information about your family history onto a web site in the hopes that a cousin will see the information and respond, giving you contact with a relation and possibly more information. Let's take this one analogy one step further.

In the water just off shore of what used to be a tiny fishing village in Belize, we saw our fishing guide and boat pilot throwing a net to catch small fish that we'd use to catch larger fish on the reef later that morning. We could have then taken those larger fish to use as bait to catch even larger fish or even sharks. I've encountered a similar thing when it comes to genealogy information.

I've posted information about my Kelly family line, that Thomas Doran was married to Mary Ann Kelly in Illinois. I found information that someone who ended up being a second cousin posted showing Mary Ann's parents as being Hugh Kelly and Catherine. I posted this information onto the RootsWeb message boards. Almost immediately, I got a response from another second cousin that had a photo of Catherine Kelly. This cousin believed her maiden name was Murphy but wasn't sure. I posted this information and got a response from a third cousin saying she had a photo of Hugh Kelly and a funeral card of Catherine Kelly. It said her maiden name was Murphy, and it gave her birth date and location. I then posted this information and got a response from someone who might be a fourth cousin (not confirmed yet). Their great-great-grandfather was Joseph Murphy. His obituary listed that he had a living sister named Catherine Kelly, born in the same year as my Catherine Kelly, living in Jolliet, Illinois, which is where my great-great-grandmother's funeral card said she died the year after Joseph Kelly did.

So, be sure to use your earlier, smaller catches as bait to catch bigger and bigger fish! One small bit of information may trigger someone to give you a little more. This bit more may allow someone to see a connection to their family and possibly break your brick wall to smithereens.

I've been working hard on cleaning up the scans of the Bixenman Family, Volume 2 by Sister Catherine Seamann. I hope to have Volume 2 available to order no later than the beginning of November.

My search for confirmation that I've found the correct Elizabeth Dunzinger has not turned anything up as of yet. I have placed orders for her birth records from the New York City Department of Vital Records and her death certificate from the State of Iowa. I hope to see results of these requests in the next month or so.

--Matt
Posted by Matthew Miller at 3:26 PM No comments: