Learning About Their Lives

While I am, like all genealogists, thrilled when we discover the name of a new ancestor, one thing that has always made me smile is learning about actual events in their lives. Having the pertinent information down on paper helps you learn the facts about the events, but pictures allow you to really get a feel for what happened.


In recent years, I was given a copy of a photo of my mother carrying the milkers while her sister pushed the milk cart. 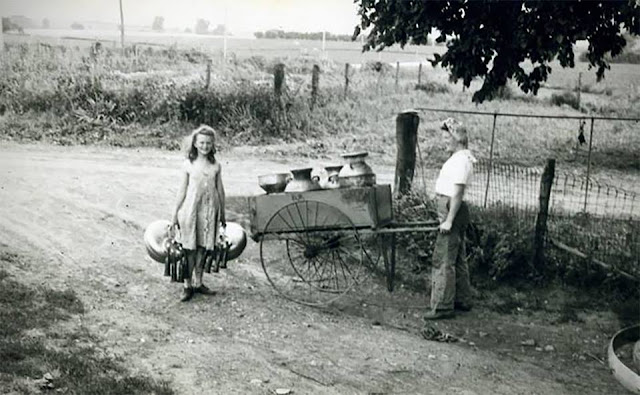 The same aunt that appears in that photo told me that the following photos were taken after she had gotten married and left the farm. They were taken on March 10, 1949, which means my mother was still around home but, at the very least, I'm sure her parents knew that she wouldn't be sticking around much longer since she would be turning 18 the next month. That left just her two younger sisters to help around the farm. Given that he had dairy cows in addition to a crop in his fields and he'd be down to just two helpers around the farm. I'd imagine it was a bit too much for him to handle.

That day, my grandfather, Benedict Panther, sold off his dairy cows. If someone had just told me this, I'd think "Okay. So he sold a few cows. Interesting, but no big deal." But with the photos? Wow! It really lets me know what the day was like!

Seeing these photos really puts the cattle sale into perspective. It feels so much more real seeing what actually happened rather than just reading about it. I just love getting into the details of exactly what my ancestors lived through. I feel it helps me understand them as the people they were.