The Passing of Ken Panther

I got word that my oldest cousin, Ken "Doc" Panther passed away this past Thursday. I always knew him as "Kenny". There's over a 20 year age difference between us so we didn't hang out but he was always up for a friendly conversation. Being the first grandchild of Grandma and Grandpa Panther, there were a lot of pictures of him in his early years. His 46th wedding anniversary was on Monday. He was diagnosed with very aggressive lung cancer on Tuesday and he passed away on Thursday. 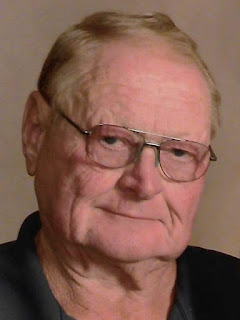 Read more »
Posted by Matthew Miller at 9:16 PM No comments:

The Passing of Martha Panther Dohman

I got news that my aunt Martha Rose Panther Dohman passed away this afternoon. Sadly, it was not a surprise. We had heard she had taken a turn for the worse in the past few weeks and months and had chosen to go into hospice care. Aunt Martha was a beautiful, kind, fun lady with a huge heart. I'll never forget her laugh. She was my mother's younger sister.

If you look through my posts about my Dunzinger, Ziegelmüller and Seefried lines, you know that I've been looking forward to the Eichstätt diocese church records to be digitized and put online. The diocese has announced that it's happening! The church records will be posted to Matricula Online between now and March 2022.

Read more »
Posted by Matthew Miller at 11:01 AM No comments:

I did a search for the town my great-grandfather Aloys Panther was born in and emigrated from when he came to America. I was surprised how many videos there are available, given how small the town is. The first I'll list is the official YouTube channel for the town of Achern.

Wow! It's been a long time since I last posted. My excuses are many. Too busy. No new research happening. No new discoveries. No new tools that excite me. Most of all, no ideas or inspiration for new posts. Finally, today, I received an incredible email. I have to share the story.

Linda Stufflebean over at Empty Branches on the Family Tree followed Genea Musings Saturday Night Genealogy Fun Prompt. I'll join in. The prompt is "Who is #42 on your ahnentafel list?". If you're not sure, your genealogy program should tell you. In RootsMagic, highlight yourself, then go to Reports, Lists and select Ahnentafel. That list will list your ancestors in an ahnentafel format, which numbers your ancestors in a very specific way. Your #42 in your ahnentafel list is your father's mother's father's mother's father. Kind of like the zig-zag challenge.

First, a word of warning. If you cannot stand reading about controversial topics, unpleasant events, tragedy and death, I'll ask that you stop reading now. This post is about the death of my grandmother's sister. I knew she died young and I had heard rumors about the cause. Someone recently posted newspaper articles about the trial that followed, which confirms what I had heard was the truth. Someone posted about her death in the West Point, Iowa community Facebook group a few years ago and another person commented that they had "heard about her". I commented that I had also heard the rumor but that I would not comment about rumors or mention what they entailed. Now that these articles are out there and the rumor has been proven true, I will post about it, as unpleasant circumstance as it is.

It seemed as if spring would never get here this year. Finally, the weather is warm enough to enjoy some time outside and the trees and grass is starting to sprout new green growth. It's my favorite time of the year. Along with spring comes baseball. I've never been athletic but if there was one sport I would have played, had I had the skills and coaching, it would have been baseball. Based on what I'm going to show here, I tend to believe it's in my genes.

Read more »
Posted by Matthew Miller at 4:36 PM No comments:

I was doing some searches in Google Books to see if I could find any that contained mentions of my ancestors. With a surname like Panther, you find a lot of books that mention encounters with a member of the large cat family. So I searched for the name of my great-grandfather, Aloys Panther in quotes. I didn't find anything so I did a search for his brother's name, Ferdinand Panther in quotes. I found a book titled "Reports of Cases at Law and in Equity Determined by the Supreme Court of the State of Iowa".

Read more »
Posted by Matthew Miller at 8:14 AM No comments:

More Information About My Seefried Ancestry

A few months ago, I posted about the undocumented Seefried ancestry I had discovered. When I made this discovery, I emailed a couple of people that posted this information to see if they had any documentation or more information. One person responded that he didn't have documentation. He had gotten the information from a second cousin of his. He said he'd contact this cousin to see what he could provide him about the Seefried family research.

Read more »
Posted by Matthew Miller at 9:55 AM No comments:

A Cousin on Groucho Marx - You Bet Your Life

I had heard that my third cousin once removed, Louis Menke, was on Groucho Marx's show You Bet Your Life several decades ago. That's all I had heard about it. Nothing about what it was about. I just figured it was a game show and that's as far as it went. Then someone posted on the West Point, Iowa Facebook page a newspaper article written around the time of the show. It is quite entertaining in that it was said that Louis Menke was never out-talked by anyone. Apparently, Groucho Marx heard about this and had to invite him onto the show.

The Will of Leonard Ziegelmüller

In posts found here and here, I discussed discovering the name of the mother of my great-grandmother, Elizabeth Dunzinger Panther. It ends up the surname had been in front of us for a decade or more but we had no idea that it was her last name. My second cousin has provided me with an additional piece of evidence that, had we known to look for it earlier, could have cut decades off of this search. It is the last will and testament of Leonard Ziegelmüller. In order to take advantage of this, I would have had to recognize that the last name in the headline of the newspaper article was definitely connected to her rather than believing another family the article discussed, which she was found living with in the 1870 US Federal Census, was her family. In the end, rather than providing us the breakthrough, it serves as additional evidence that what we have discovered is correct.

Read more »
Posted by Matthew Miller at 5:26 PM No comments:

My great-grandfather, Aloys Panther, and his wife Monica Hanle Panther, along with their oldest son, came to America from Baden in 1872. Why? I had speculated that the end of the Austro-Prussian War, the death of his brother and the death of two of his sons may have convinced him to try a for a new start in a new land. I believe his brother may have paid a return visit to his home town to convince him to follow him back to America.

Read more »
Posted by Matthew Miller at 10:17 PM No comments:

There is a web site that contains images of church book images across mainland Europe, mostly in Germany and Austria but also including Poland, Netherlands, Hungary, Bosia-Herzegovena, and Luxumburg. The number of parishes included is amazing. The current count of churches included is nearly 6,000. This site is known as Matricula Online. It can be found at https://data.matricula-online.eu/en/ . If you have ancestors from these areas, be sure to browse their church book image collection.

I looked for churches my family is known to be from and sadly, none of them are there. I'm still excited to find this site. They state that their goal is to continuously expand the content of the site.

Read more »
Posted by Matthew Miller at 10:00 PM No comments:

The Missouri Secretary of State web site has a searchable database of images of death certificates for the state of Missouri from 1910 -1969. It can be found at https://s1.sos.mo.gov/Records/Archives/ArchivesMvc/ . If you have anyone in your family tree that died in the State of Missouri between these years, I encourage you to search the database. Over a period of a few days, I searched my genealogy database for anyone that died in Missouri during these years. I didn't find every one of them but I did find 58, from just about every branch of my family tree. Several of these gave me new information such as parents, spouses and death dates that I didn't have before. Some causes of death I saw were burned due to a child playing with fire, to typhus, to electrocution.