The Will of Leonard Ziegelmüller

In posts found here and here, I discussed discovering the name of the mother of my great-grandmother, Elizabeth Dunzinger Panther. It ends up the surname had been in front of us for a decade or more but we had no idea that it was her last name. My second cousin has provided me with an additional piece of evidence that, had we known to look for it earlier, could have cut decades off of this search. It is the last will and testament of Leonard Ziegelmüller. In order to take advantage of this, I would have had to recognize that the last name in the headline of the newspaper article was definitely connected to her rather than believing another family the article discussed, which she was found living with in the 1870 US Federal Census, was her family. In the end, rather than providing us the breakthrough, it serves as additional evidence that what we have discovered is correct.

Here is the last will and testament of Leonard Ziegelmüller. I'll post the entire document at the end of this post but what we're interested in is on page 3. It is found numbered as #2 shown here. 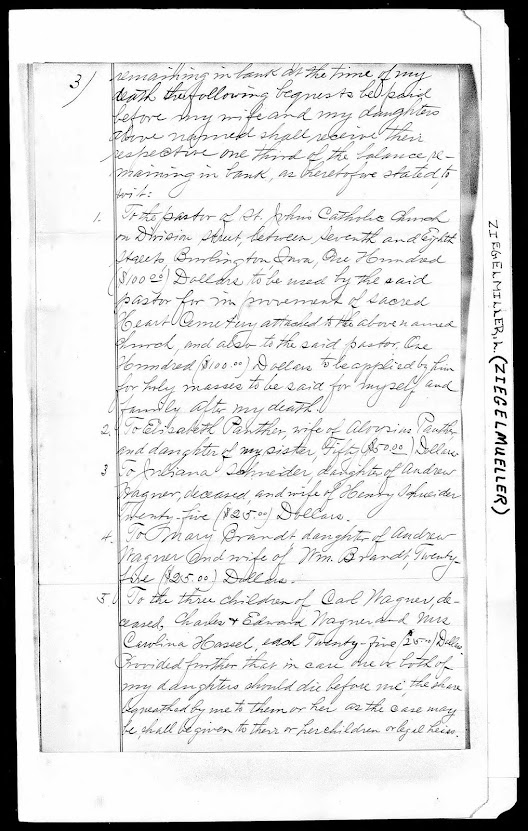 To Elizabeth Panther, wife of Aloysius Panther, and daughter of my sister, Fifty ($50) Dollars.

That one sentence, found in the will of a person we were aware of having some sort of a connection to the family, spells out exactly how he is related to my great-grandmother. My great-grandmother was his niece. Finding this out would have told us that Elizabeth Dunzinger's mother's maiden name was Ziegelmüller. It may not have led us directly to all of the information we've since found but it would have helped us along the way. I will be reviewing every word of this document to be sure I've extracted all genealogically significant information from it.

Here is the full last will and testament of Leonard Ziegelmüller, born and married in Wemding, Bavaria, lived much of his life and died in Burlington, Des Moines County, Iowa. 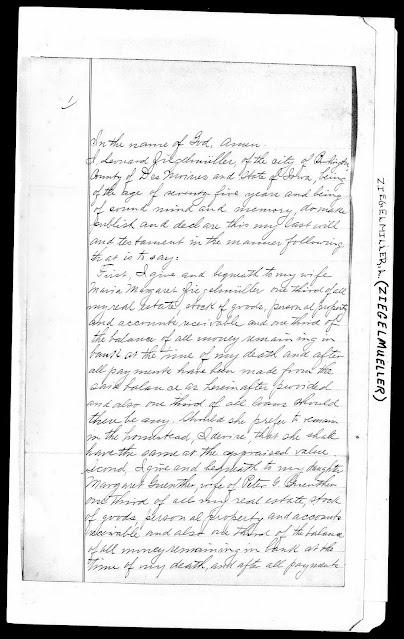 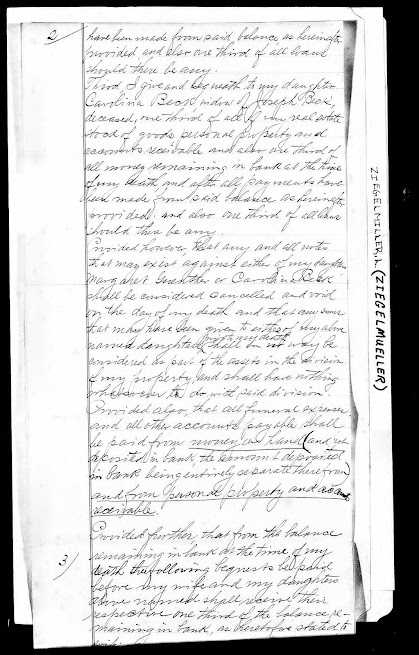 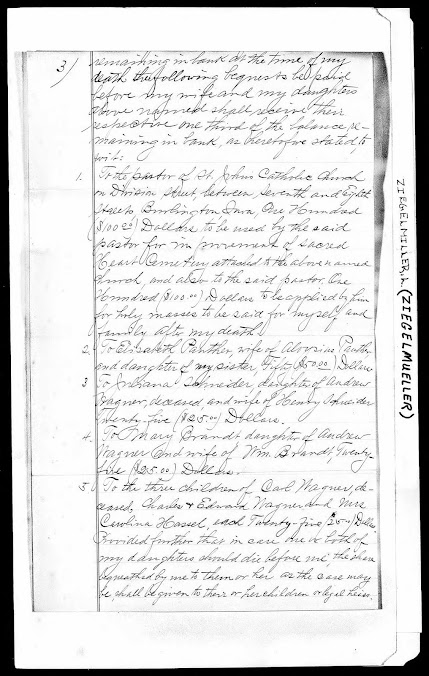 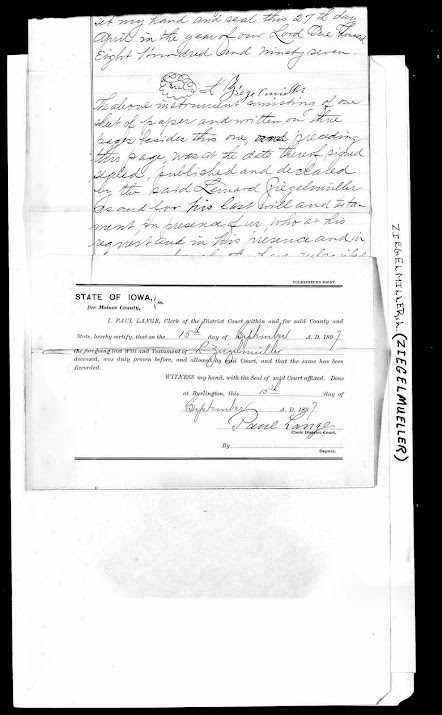 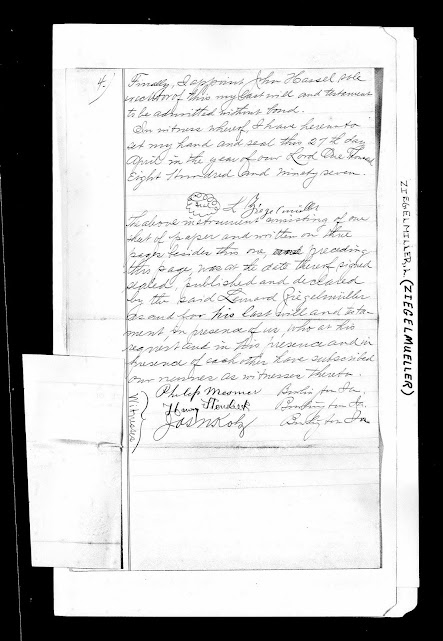 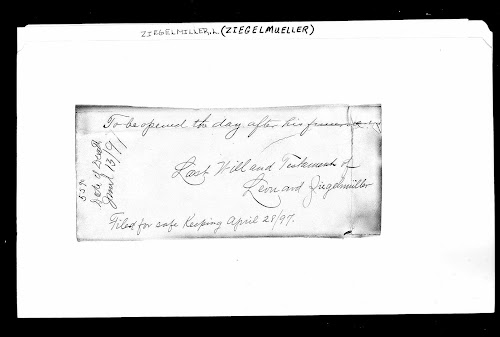 In the name of God, Amen.
I, Leonard Ziegelmüller, of the city of Burlington, County of Des Moines and state of Iowa, being of the age of seventy-five years and being of sound mind and memory, do make and publish and declare this my last will and testament in the manner following that is to say:

First, I give and bequeath to my wife Maria Margaret Ziegelmüller one third of my real estate, stock of goods, personal property and accounts receivable and one third of the balance of all money remaining in bank at the time of my death and after all payments have been made from the said balance as hereinafter provided and also one third of all loans should there be any. Should she prefer to remain in the homestead, I devise, that she shall have the same at the appraised value.

Second, I give and bequeath to my daughter Margaret Guenther, wife of Peter G. Guenther one third of all my real estate, stock of goods, personal property and accounts receivable and also one third of the balance of all money remaining in bank at the time of my death, and after all payments

have been made from said balance, as hereinafter provided, and also one third of all loans should there be any.

Provided however, that any and all notes that may exist against either of my daughters Margaret Guenther or Carolina Beck shall be considered cancelled and void on the day of my death and that any sums that may have been given to either of my above named daughters prior to my death shall in no way be considered as part of the assets in the division of my property, and shall have nothing whatsoever to do with said division.

Provided also, that all funeral expenses and all other accounts payable shall be paid from money on hand (and not deposited in bank, the amount deposited in bank being entirely separate therefrom) and from personal property and accounts receivable.

1. To the pastor of St. John's Catholic Church on Division Street, between Seventh and Eighth Streets, Burlington, Iowa, One Hundred ($100.00) Dollars to be used by the said pastor for improvement of Sacred Heart Cemetery attached to the above named church, and also to the said pastor, One Hundred ($100.00) Dollars to be applied by him for holy masses to be said for myself and family after my death.

2. To Elisabeth Panther, wife of Aloysius Panther, and daughter of my sister, Fifty ($50.00) Dollars.

Provided further that in case one or both of my daughters should die before me, the share bequeathed by me to them or her as the case may be, shall be given to their or her children or legal heirs.

Finally, I appoint John Hassel sole executor of this my last will and testament to be admitted without bond.

In witness whereof, I have hereinto set my hand and seal this 27th day of April in the year of our Lord One Thousand Eight Hundred and ninety seven.

The above instrument consisting of one sheet of paper and written on three pages besides this one and preceding this page, were at the date thereof signed, published and declared by the said Leonard Ziegelmüller as and for his last will and testament, in presence of us, who at his request and in his presence and in presence of each other have subscribed our names as witnesses thereto.

Always be sure to find all documentation associated with everyone even seemingly only tangentially connected to your family. You never know what goldmine of information they may contain.

Posted by Matthew Miller at 5:26 PM