More Information About My Seefried Ancestry

A few months ago, I posted about the undocumented Seefried ancestry I had discovered. When I made this discovery, I emailed a couple of people that posted this information to see if they had any documentation or more information. One person responded that he didn't have documentation. He had gotten the information from a second cousin of his. He said he'd contact this cousin to see what he could provide him about the Seefried family research.

A few days later, he sent me a link to a file transfer site. He had sent a zip file containing over 800 megabytes and 2000 files of his cousin's Seefried research. He also provided a bit more information about the undocumented family line I had discovered. It was obtained from a book that was included in the file he sent. The book looks to have been written around 1895 and spells out the family I described in my earlier post. It is a nearly 300 pages long and is a compiled history of the Seefried family. It is titled "Chronik der Seefried". It is entirely in German. While I can't read it as quickly and easily as I would be able to if it was in English, I still should be able to muddle my way through it. 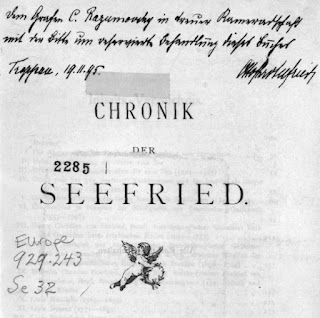 The problem is that later research proved that the church records showing my 3x-great-grandmother, Victoria Seefried's parents did not line up with the book showing her being born to Franz Joseph Seefried and Maria Anna Jaumann. Her parents shown in the church records were Joseph Seefried and Maria Anna Hager. This disconnects my speculative family line from the greater Seefried family as the ancestry of Joseph Seefried is not known. He believes and I believe he's correct, that my Seefried line will connect with this greater family line within a few generations, given the common surname and small area the two lines are from. The good news is that the Hager line is known back to Maria Anna Hager's 4x-great-grandparents.

The rest of the files in the archive I was sent do not contain actual documentation. They are notes and extracts of the person's research. While not completely what I'd like to see, it is still some good information that I can use to one day track down documentation about my Seefried ancestry.

So, the short version of this is that information is still being clarified about my Seefried ancestors. More information is coming in and while it's not firming up what I previously believed about the family, it's at least being corrected. I'm still on the lookout for any documentation proving or expanding on this family line. I'll keep you posted!

Posted by Matthew Miller at 9:55 AM