I was doing some searches in Google Books to see if I could find any that contained mentions of my ancestors. With a surname like Panther, you find a lot of books that mention encounters with a member of the large cat family. So I searched for the name of my great-grandfather, Aloys Panther in quotes. I didn't find anything so I did a search for his brother's name, Ferdinand Panther in quotes. I found a book titled "Reports of Cases at Law and in Equity Determined by the Supreme Court of the State of Iowa". 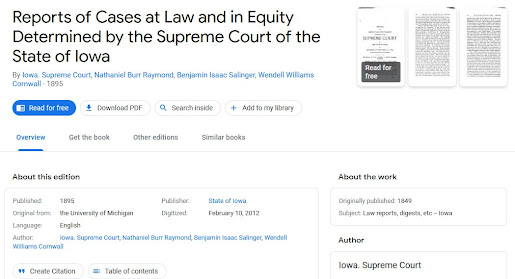 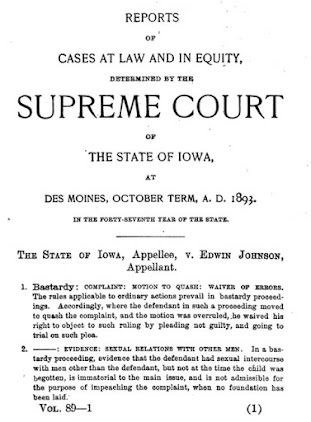 The case, from 1893, involves Ferdinand Panther, the brother of my great-grandfather, and his neighbor, Fred Trauman. It sounds like the two neighbors teamed up in building a fence between their properties around the year 1877. The initial fence was "hog tight", meaning that the hogs owned by Mr. Trauman were not able to leave his property and get onto Mr. Panther's property. After sixteen years, the fence needed replacing, as would be expected. The problem came down to Mr. Panther replacing some of the fence with a fence that was good enough for him but it was not "hog tight" and so hogs got onto Mr. Panther's property and did some damage. Mr. Traunman thought this was Mr. Panther's problem and so wouldn't reimburse him for his damages since Mr. Panther was the one that replaced the fence. The decision was found in Mr. Panther's favor and so it was appealed to the Iowa Supreme Court by his neighbor. 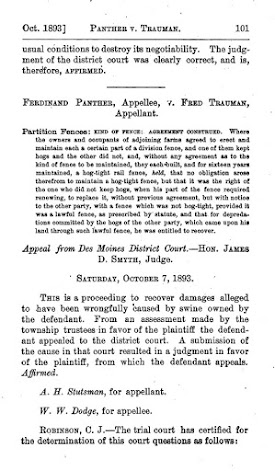 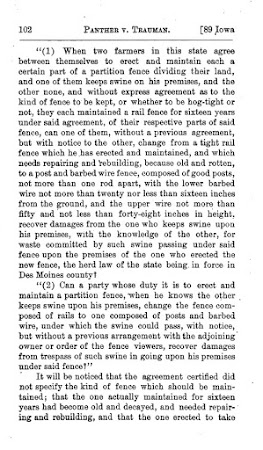 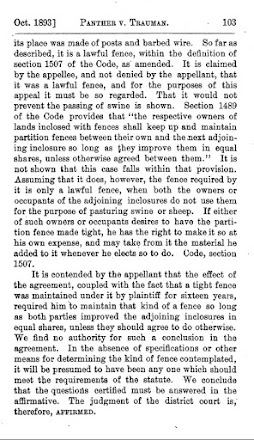 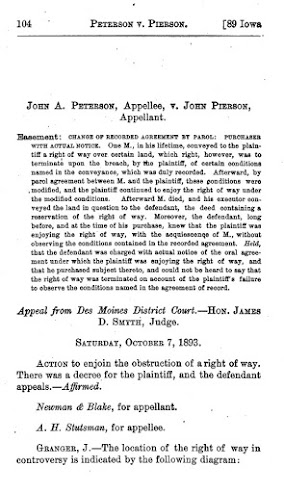 In the end, the Iowa Supreme Court found that the there was no agreement between the two that a particular type of fence needed to be maintained between their properties and the fence built by Ferdinand Panther met the legal definition of a fence and so was all he was required to build. The fact that it was not good enough to keep his neighbor's hogs on his neighbor's property was not his problem.

Check out Google Books. You'll find more there than just published books. You might even find mentions of them in court proceedings.

Posted by Matthew Miller at 8:14 AM