Of  course, everyone loves old photos. At first glance, they're pictures of your ancestors. Your mother's family, a family gathering at some special occasion. You figure out who's in them and when it was taken and add them to your database. How often do you go back and look at them? I mean really look. In your mind, look at them as if you've never seen them before. Look in the background, at the expression on people's faces, at things that are not the focus of the picture. Do this and it's possible you can figure out things that were really going on. Here are few examples from my collection.


First up is one of the photos I recently scanned in from my mom's photo albums. It's a group photo taken at the 59th wedding anniversary of my great-grandparents, August Menke and Mary Harmeyer. 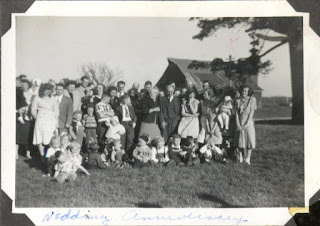 At first glance, it's your typical group photo taken at a family gathering. But look closer. Right in the middle is my great-grandmother and a young boy that I'm told is Marvin Fedler but I don't know of a blood relationship to the family. He must be a friend of the family. Regardless, look at the two of them closer:

Doesn't it look like they're playfully picking on each other? Given that others around them are looking at them makes me believe it even more. It makes me feel like I know them better. In addition, pay attention to when a photo was taken. Their 59th anniversary was two months before Mary passed away. It makes me think they might have known she didn't have much longer to live so they had a big celebration for their 59th anniversary rather than waiting for the 60th.

Next up is another group photo taken at a party at my Aunt Mary and Uncle Joe Winnike's home. 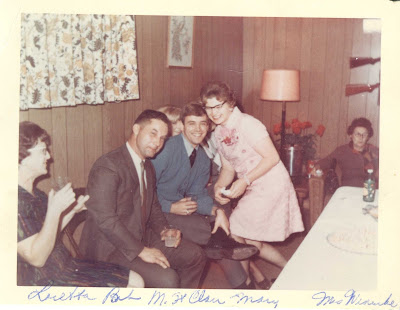 It shows my Aunt Mary with her son-in-law. Next to them is my uncle, Bob Blind. In the background is Mary's mother-in-law and on the far left is Bob's wife, Mary's sister, my aunt, Loretta. Take a closer look at Bob and Loretta. 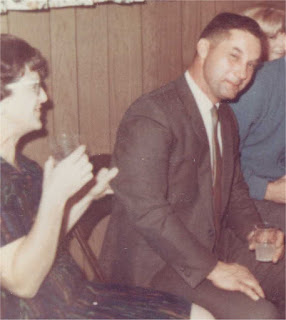 To fully understand, you must know that my Uncle Bob was "quite the card" as my mother would say. He was a real joker. What's happening here is the photographer is trying to get a picture of Mary Winnike and her son-in-law and Bob is photo-bombing before photo-bombing was cool. Loretta was pulling his sleeve, trying to get him to back up so they could get a good picture.

Next up is the Doran family. Here are a few photos of the Dorans. 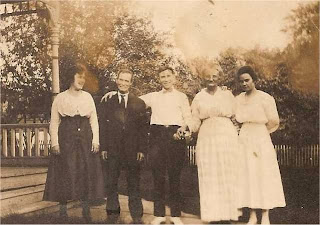 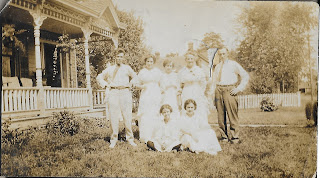 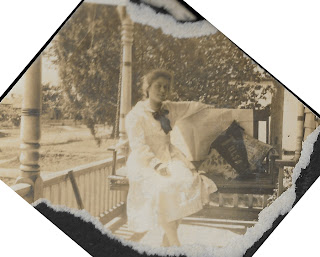 Take a look at the support posts of the porch in each of these photos and the fence in the first two. They are all taken in the front yard or porch of the Doran home in Fort Madison, Iowa. You can almost get an idea of what it would look like standing in their front yard.

In the next example, there's nothing in the photograph itself that sheds light on anything, it's the photo and the date. Here is a picture of my dad (and his toupee) standing, and two of his nephews, one of which is Stanley Winnike, sitting on a chair in the center of the photo. 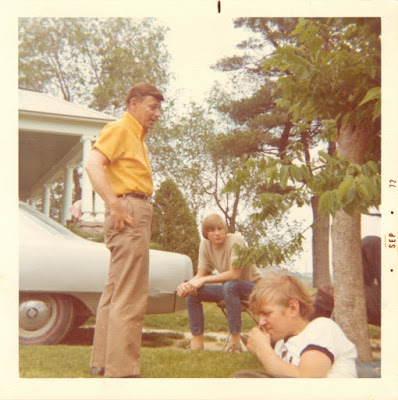 The key to this one is the date on the right edge of the photo. This is the date it was developed, not the date it was taken, as is frequently misunderstood. Stanley Winnike died in a traffic accident. His family was looking for any recent photographs of him to display at his funeral and could never find any that were recent. This one was likely taken by my mother during a visit to southeast Iowa and developed in Nebraska a few months after their return. The instant-ness of digital photography was still decades off. It was developed in September of 1972. Stanley died on July 19, 1972. This was one of the last, if not the very last photo taken of Stanley before his death. 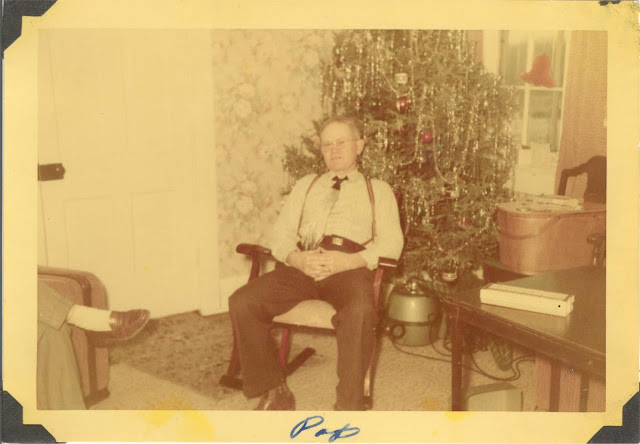 Here's a great picture of my grandfather, Ben Panther. It was obviously taken at Christmas, but what year?

Here's another photo I found in Mom's boxes. Keep in mind that I didn't recognize these photos were related when I scanned them in. They were both in a large box I was scanning. I only stumbled on the commonality later. 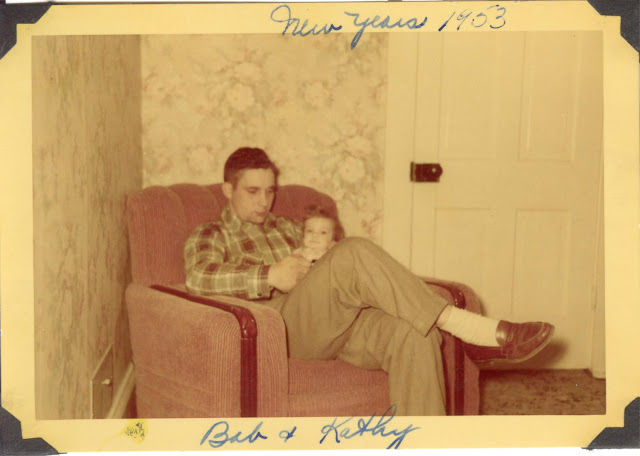 This is my Uncle Bob Blind with his daughter Kathy. The photo is labeled New Years 1953.

Looking at a large group of thumbnails showed me the similar color of the photos, which tells me they could have been taken close to the same time. Now let's look closer at each of the photos.

Here's Bob's foot in the photo of him and Kathy: 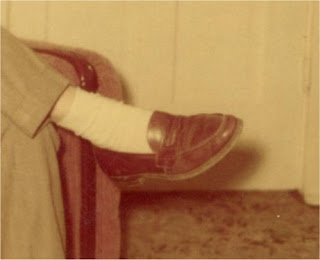 What's that on the far left side of the photo of Grandpa? 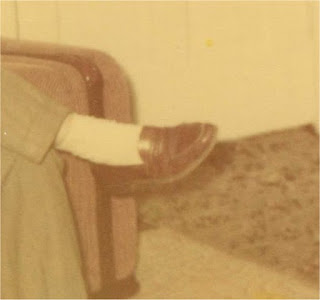 Looks like Bob's foot! Even the sock and pant leg are in exactly the same position. But Grandpa's picture was taken at Christmas and Bob and Kathy's was taken at New Years. Let's take a look at the gifts under the Christmas tree: 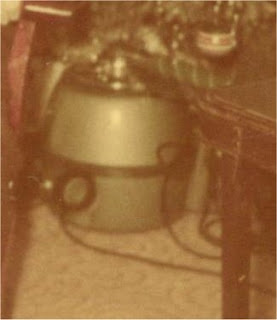 That's not a Christmas present, that's a vacuum cleaner! Not only would that make a bad Christmas present, it's not wrapped and the power cord is strung across the floor. It must have been being used to clean up Christmas tree pine needles...some time around the new year maybe? These photos were taken within seconds of each other on New Year's Day, 1953.

Go back and look at the seemingly unimportant things in the background of the photo. Match them up with other photos to see which ones may have been taken at the same time. What do these details tell about what's really going on in the pictures? Take another look and see what you missed the first time around.