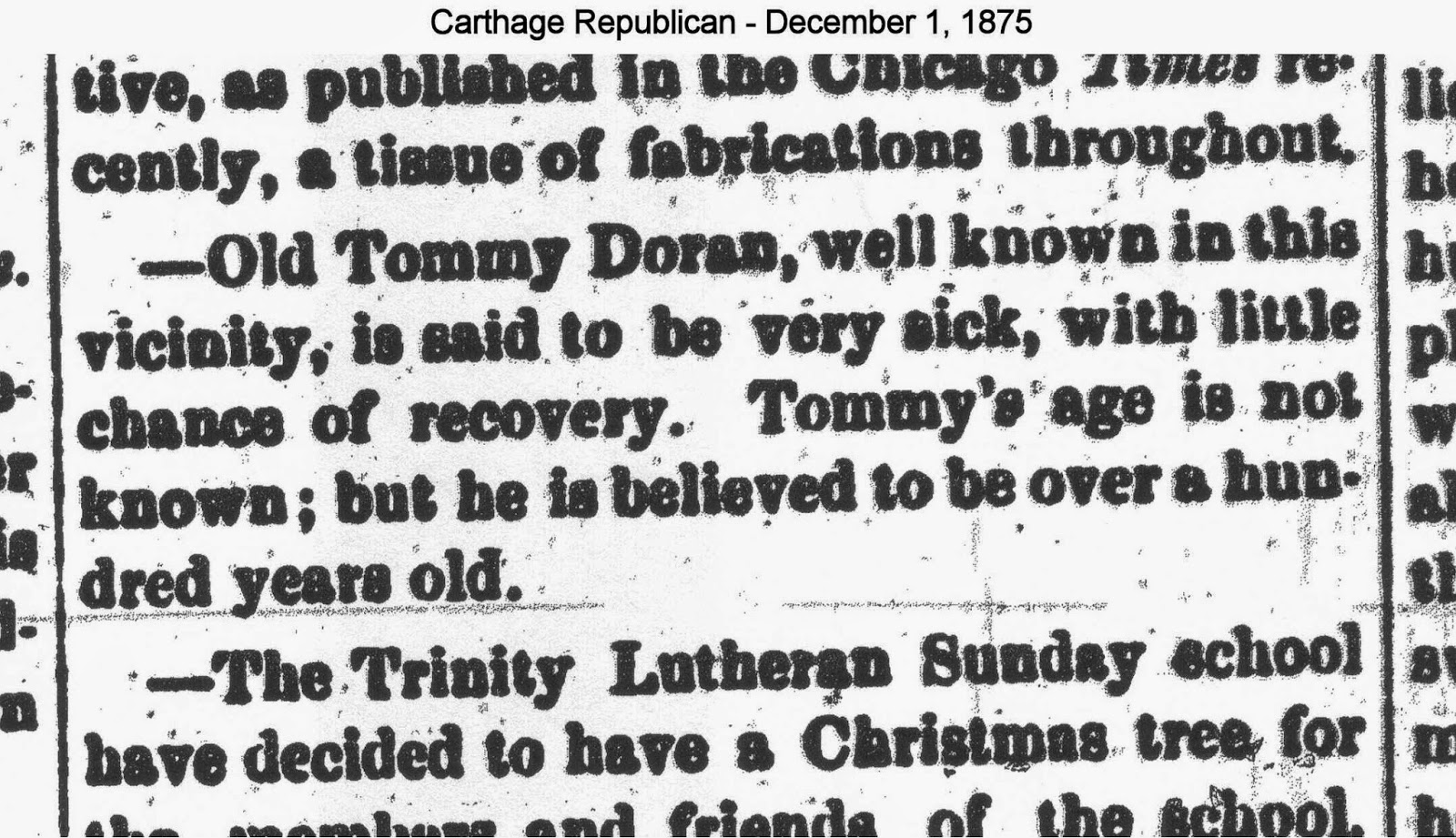 Article in the Carthage Republican in December 1945, titled "Seventy Years Ago" states, "An aged citizen known as 'Old Tommy Doran,' died Dev. 27 (sic). He was thought to have been nearly 100 years old." This means he died December 27, 1875. 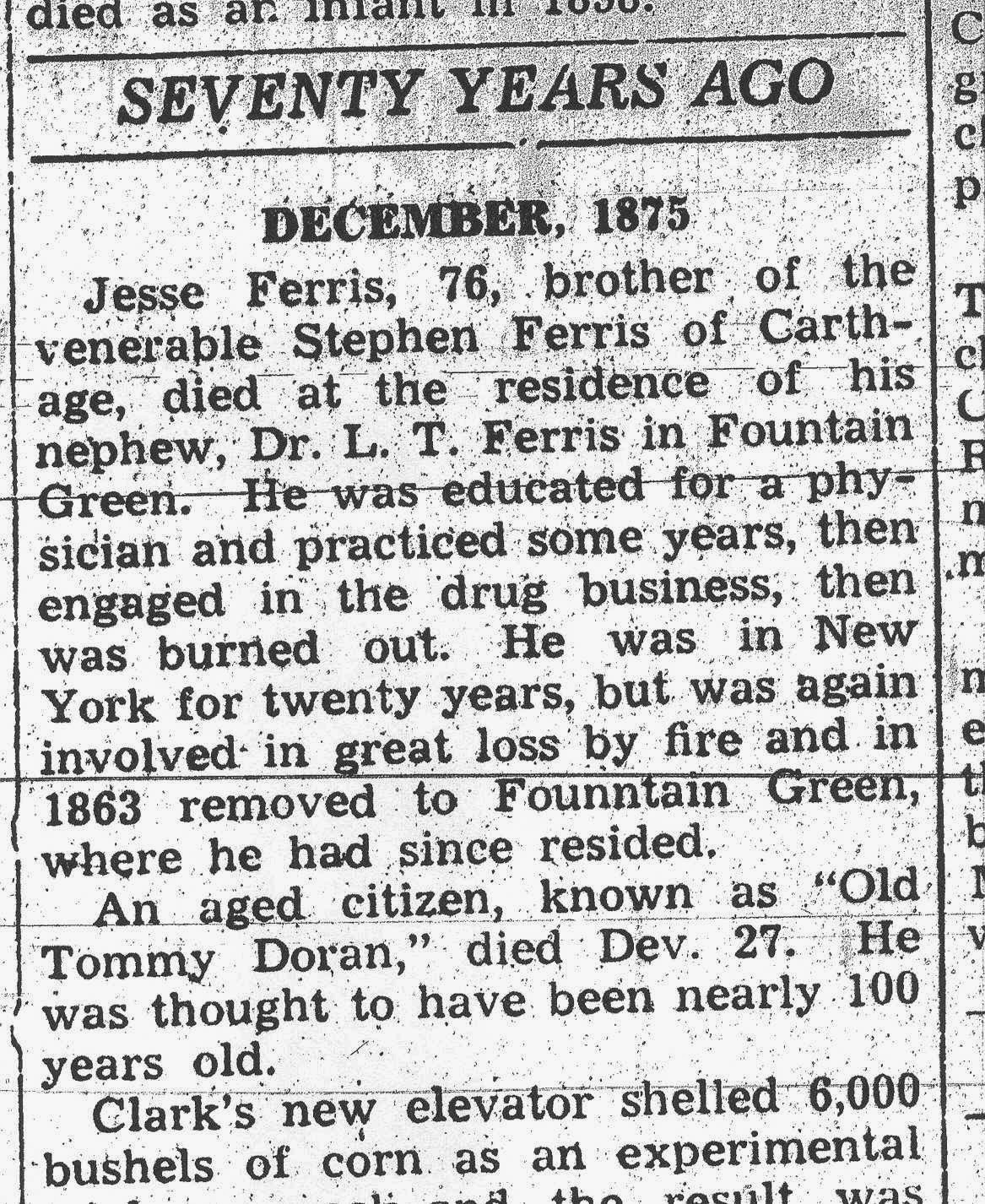 Petition for Letters of Administration, in the matter of the estate of Thomas Doran, deceased, was filed by Nancy A. Dunnigan on February 17, 1876, stating that Thomas Doran of Carthage, Hancock County, Illinois, died on or about January 3, 1876. Says he left a widow, Catherine Doran and children Thomas, now of Texas, Fanny Neason and Margaret Reilly as his only heirs. It also says the person filing the petition, Nancy Dunnigan, is a child and creditor. 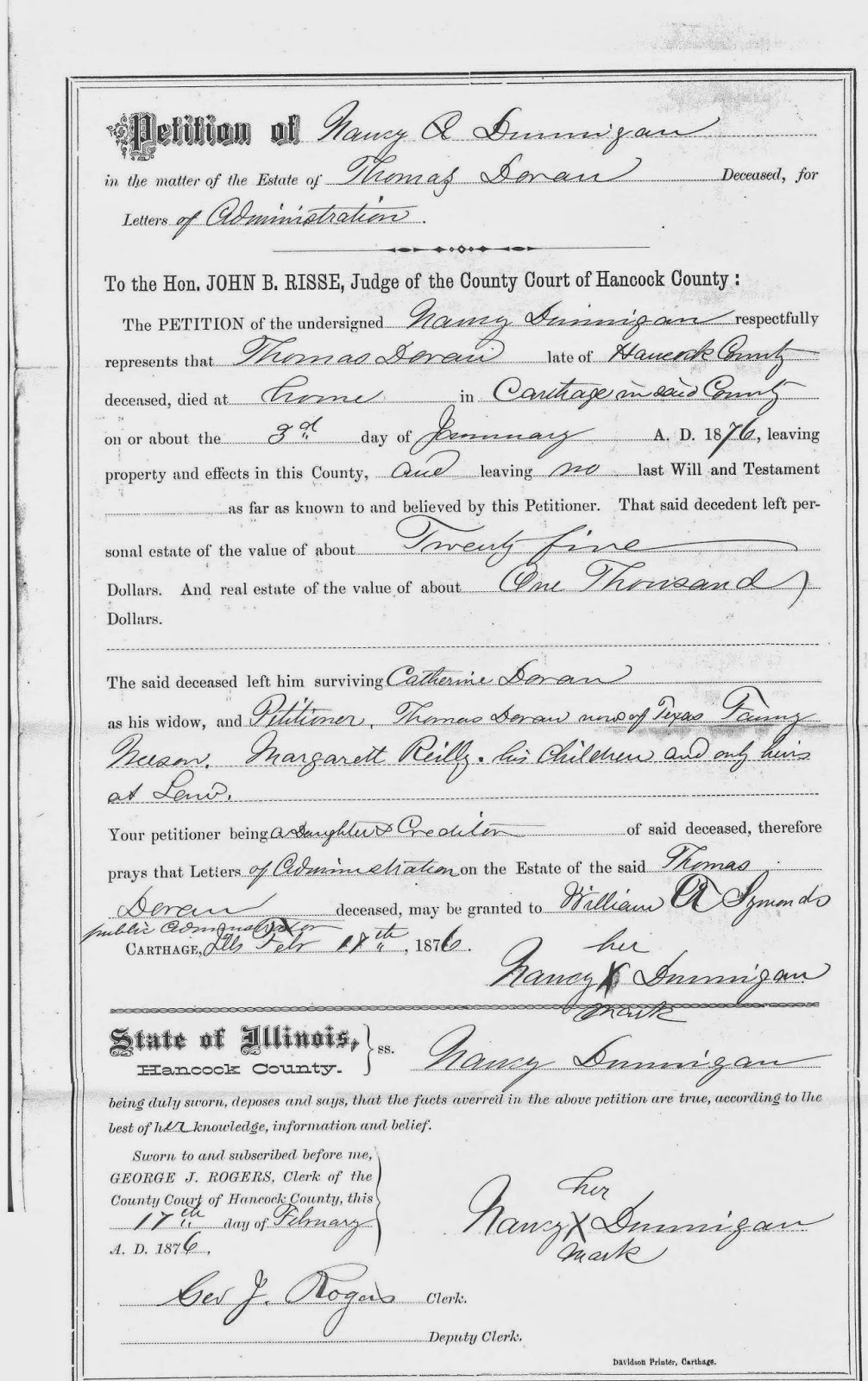 Now, Thomas Doran also being listed here as an heir doesn't necessarily mean that this is my great-grandfather. Let's continue looking at Thomas Doran's probate papers. 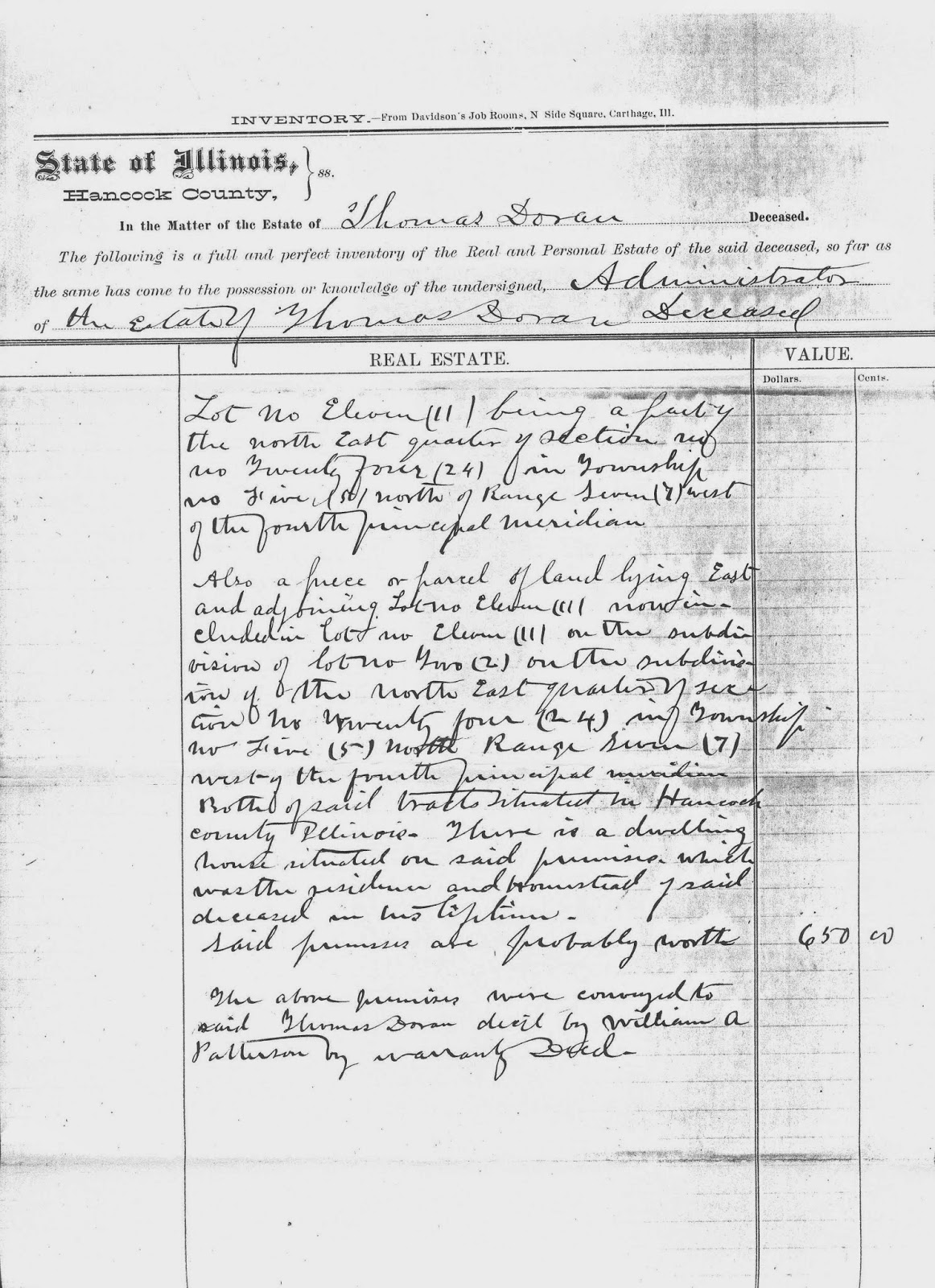 In the the estate of Thomas Doran that died about January 3, 1876, is an inventory of his property including:

"Lot no. eleven (11) being a (?) the north east quarter of section no. twenty-four (24) in township no. five (5) north of range seven (7) west of the fourth principal meridian."..."The above premesis were conveyed to said Thomas Doran deceased by William A. Patterson by warranty of deed."

Next, we have a transfer of ownership of land from the estate of Thomas Doran, deceased, represented by William A. Symonds, Administrator of the estate, who was the plaintiff and Thomas Doran, Nancy Dunnigan, Margaret Reilly, Fanny Neason and Terrance neason were defendants. It states that Mr. Symonds sold at public auction, the real estate owned by Thomas Doran, deceased, to Patrick McGovern, who was the highest bidder at the auction. The property is described as "lots number eleven (11) and twelve (12) in the subdivision of lot two (2) of Patterson's addition to the town of Carthage and being in the subdivision of the north east quarter of section twenty-four (24) of township five (5) north and of range seven (7) west of the fourth principal meridian" in Hancock County, Illinois. It continues "situated between the Wabash Railway on the north, and the lands of the heirs of John Carlin, deceased, on the south and between the lot of Owen Carroll on the west and and the railway from Carthage to Quincy on the east thereof." 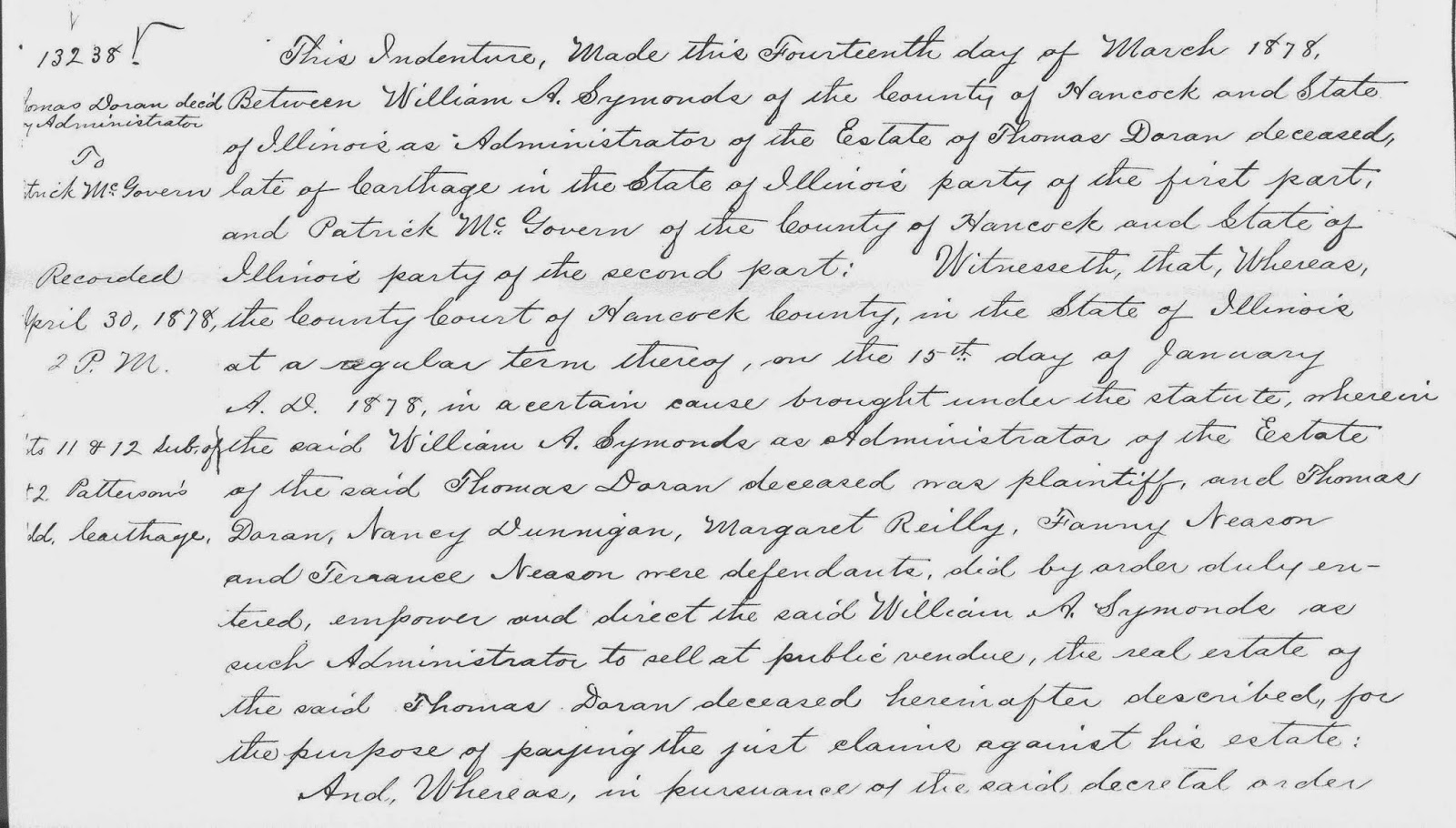 Next, we have a transfer of ownership of land from Nancy Dunnigan to Thomas Doran on May 29, 1878. This land is described as "Lots numbered fifteen (15) and sixteen (16) of the subdivision of lot number two of (William A. Patterson's) subdivision of the north east quarter of section number twenty-four (24), in township number five (5) north and of range number seven (7) west of the fourth principal meridian and situated in the county of Hancock in the state of Illinois". 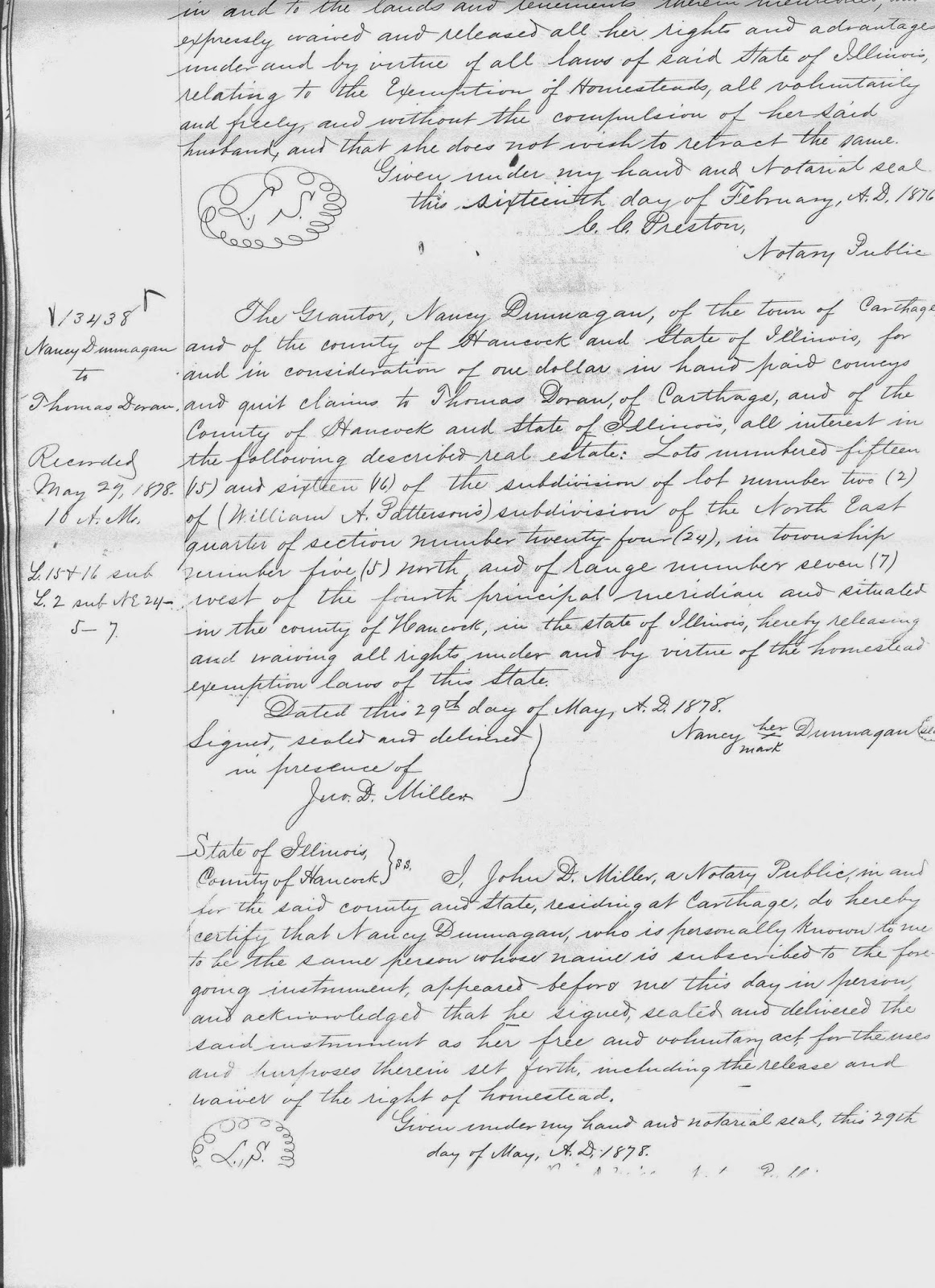 Next, we have the sale of land, made on April 28, 1897 by Thomas Doran and his wife Mary, of Fort Madision, Lee County, Iowa the following real estate:
"Lots numbered fifteen (15) and sixteen (16) of the subdivision of lot number two (2) of (William A. Pattersons) subdivision of the north east quarter of section number twenty-four (24) in township number five north of range number seven (7) west of the fourth principal meridian". - I know these are my great-grandparents. 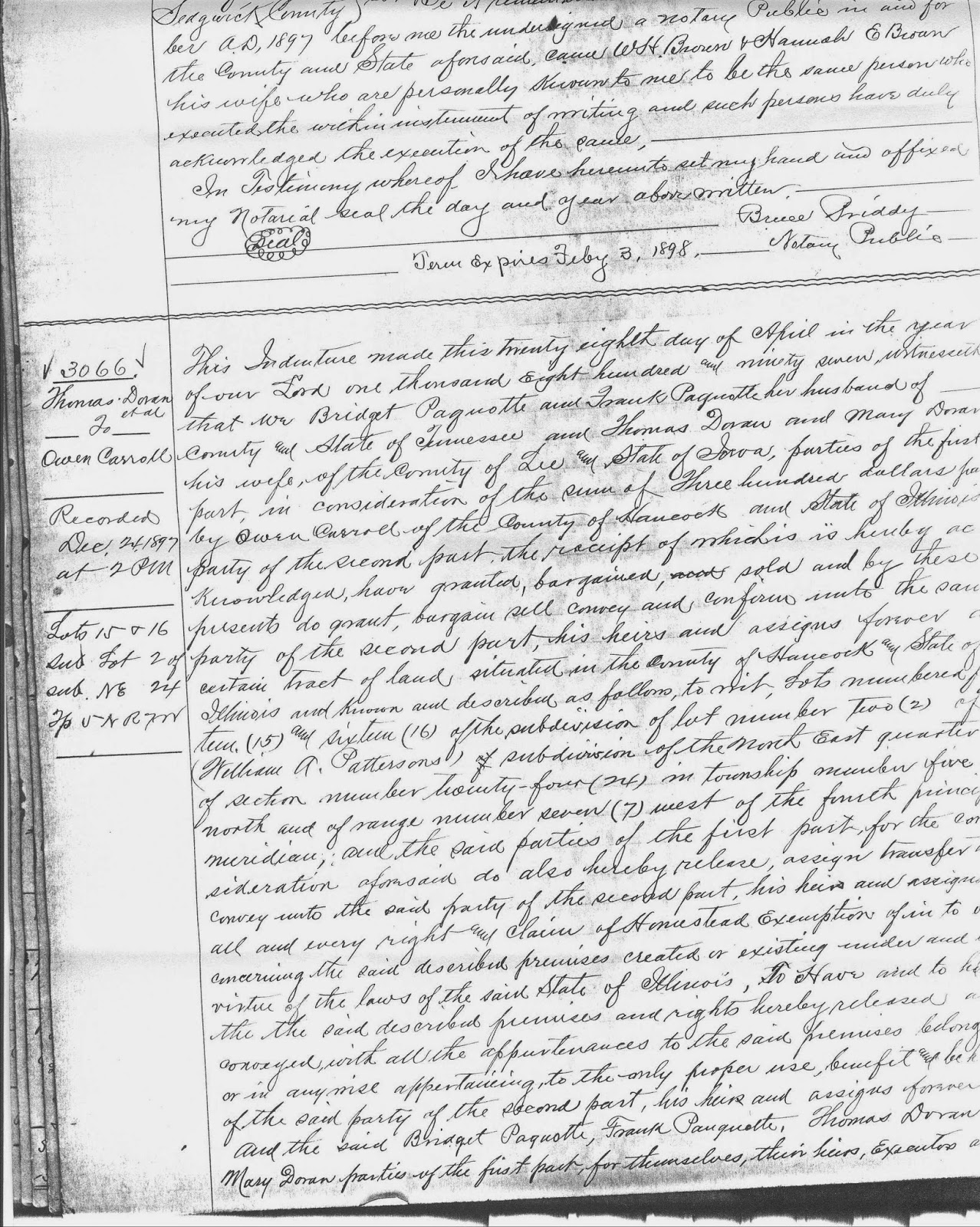 Now, the question is, are the lots that are numbered fifteen and sixteen that my great-grandparents sold in 1897 the same as or a part of lots numbered 11 and 12 in 1876? The fact that one of the heirs in 1876 sold it to my great-grandparents in 1878 tells me that it is part of the same land. However, the fact that she sold it to them means that this Thomas Doran isn't necessarily the same noted as an heir in the probate papers.

Here, we have what I consider circumstantial evidence that the parents of my great-grandfather were Thomas and Catherine Doran. This Thomas Doran is the one that died on approximately January 3, 1876 and whose children included my great-grandfather and siblings Fanny (Doran) Neason, Margaret (Doran) Reilly and Nancy (Doran) Dunnigan. The biggest argument against this reasoning is that I have no information about my great-grandfather, Thomas Doran, ever living in Texas. However, the fact that his obituary notes his parents as Thomas and Catherine Doran supports this conclusion. 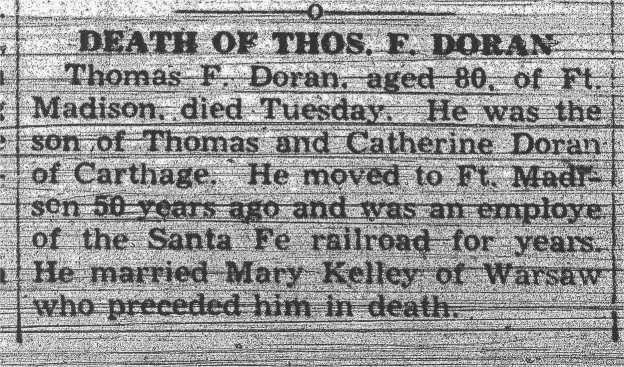 My wife and I will likely make a trip to the area some time in the next few months. While there, I'm going to be looking more in-depth at the property records in Carthage.