On that fateful day in 1868, Henry Doran, at the time thirty-one years old, was out on the town in Carthage with his nephew, Pat Neeson. Pat was the son of Henry's sister Fanny and her husband Terence Neeson. At this point I don't know Pat's age but I'd place him at about 20 years old or just a bit younger. The two were on a "drinking expedition" as the newspaper article calls it. Pat's father, Terence, tried getting his son to come home. Pat refused. Eventually, the three of them left the saloon and started walking home. When they reached the grain elevator, Terence told his son to go home or he would whip him. Being young, drunk and Irish, Pat didn't take that too well and started assaulting his father. Terence and Pat knocked each other down a couple of times before Henry also stood up to Terence and joined the fight. Terence also managed to knock Henry down. Before long, Henry's mother (who was Pat's grandmother), Kitty Doran, came to the scene with her dog and they both joined the fray against Terence Neeson. I can only guess that the dog may have started attacking Pat at this point because it is noted that Pat started attacking the dog. As Henry again closed on Terence, Terence kicked Henry in the abdomen, who fell to the ground groaning. Terence walked away. Some women helped Henry to his home, where he died.

Dr. Noyes was called in and he examined Henry's body. He made a cursory exam which didn't show him any wounds that would have caused death and he declared that it was just a coincidence that Henry died of a likely heart attack that just happened to strike during the fight. He believed that the excitement of the fight was too much for his heart. Based on one of the newspaper articles, I don't believe others in the town shared this belief. Regardless, Terence Neeson was not arrested.

Here are the newspaper articles related to the fight in Carthage: 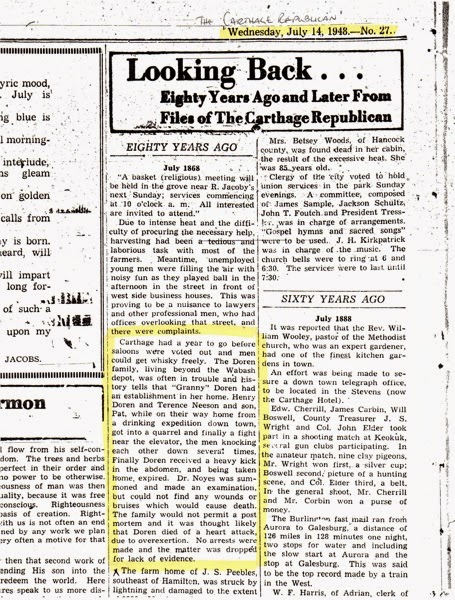 --On Wednesday evening, 22d inst., an affray occurred near the depot, in this city, between Terrence Neeson, Henry Doran and others, resulting in the death of Doran from a blow or kick delivered by Neeson, as was alleged.  A legal examination of the affair revealed the following facts:  Pat Neeson (son of defendant), and Henry Doran were down town on a spree.  Terrence tried to get his son to return home but he refused to do it; nevertheless, the three walked and wrangled together until they reached the grain elevator, when Neeson told Pat to go home or he would whip him.  Pat then commenced an assault upon his father, who knocked him down once or twice.  Henry Doran took up the quarrel and commenced to fight Neeson, and was in turn knocked down.  Old Mrs. Doran and her dog next appeared on the scene -- both taking an active part against Neeson.  At this point, Pat changed his base and attacked the dog.  Henry Doran again returned to the attack on Neeson, who thereupon kicked Henry on the abdomen when he fell, groaning.  Neeson then went away.  Some women assisted Henry to the house, where he shortly expired.  Dr. Noyes was immediately summoned, and made as thorough an examination of the body as circumstances would permit.  He did not discover any wounds or bruises which in his opinion would occasion death.  The family would not permit a post mortem examination.  The evidence being deemed insufficient to hold Neeson for trial, he was discharged.  The case is, nevertheless, invested with considerable mystery.  Either Doran died of some organic disease of the heart brought to a fatal crisis through over exertion and excitement, or he was killed by a blow or hurt, the nature of which was not revealed by the superficial examination permitted.  The body should not have been interred without a post mortem examination.


Given that Fanny's sister Nancy eventually passed away while staying with the Neesons tells me the family was satisfied and didn't hold a grudge against Neeson.

In 1861, Thomas and Kitty's son Thomas Doran joined the 16th Illinois Infantry in the Civil War. After the war, he returned home to Carthage and about six months later, moved to Cleburne, Texas. Thomas is noted as standing 5' 10" tall, 165 pounds with sandy red hair and mustache and blue eyes. After spending some time in Cleburne, he eventually moved to Junction, Texas. While in Texas, Tom met and married Ethelena Iola Hall.

You can read the newspaper articles associated with this story here:
http://matthewkmiller.blogspot.com/2014/10/share-your-info-and-ask-questions.html

He was in Bill Frank's saloon, drinking whiskey, with his bar stool leaned up against the bar. A man by the name of Jim Deaton entered the saloon, knife in hand and paced around the room. He slashed with his knife towards Tom's neck. Tom tried ducking and managed to get slashed across the bottom of his chin. The skin of his chin and neck flopped down like an apron. He got himself stitched up and needless to say, held a grudge against Deaton.

About six months later, in front of the same saloon, there was construction going on. Jim Deaton grabbed a loose piece of wood to hit Tom. Tom grabbed a needle gun and shot and killed Deaton.

It is unclear if there was a trial or just a preliminary hearing. During the hearing, Jim Deaton's widow made an appearance saying that she was going to kill that man Doran. She was relieved of the weapon and the hearing continued. In the end, it was determined that Tom acted in self-defense.

On December 21, 1878, Lewis Temple, a sheriff's deputy who was possibly a friend of Jim Deaton, found Tom Doran in a saloon in Junction and shot him dead.

Both Deaton and Doran are buried in the same cemetery. Find-a-grave also shows a headstone that notes that he served in the 24th Texas Cavalry for the Confederates but I believe that is mistaken since we know he served in the 16th Illinois Infantry on the side of the Union. This headstone does show his correct birth and death dates.

Nancy married Patrick Dunnigan on Sep 20, 1863 and had at least one additional child, Beatrice, who married Frank George Paquette in 1892. Margaret ended up marrying a man with the last name of Reilly. We believe his first name was Peter.