While searching for your ancestors in historical records, occasionally, you'll come across records documenting something of historical significance. I wanted to post this because, while doing a little bit of research on the history of the area my Panther family is from, I noticed that the church record documenting the death of Hans Jakob Christoffel von Grimmelshausen is not posted anywhere on the web. Grimmelshausen fought in the Thirty Years War and is a noted German literary figure.

So, first up in this historical tour is a page from the church death book for Renchen, Ortenaukreis, Baden, Germany. Grimmelshausen's death is recorded on August 17, 1676 in Renchen. I found this on the LDS Church's microfilm roll 0995095, section 2, page 208b. 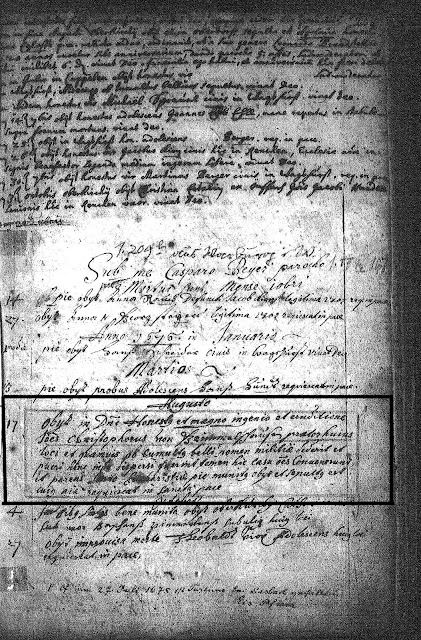 Renchen is the town he settled in after the Thirty Years War and where he wrote his famous stories, including Simplicius Simplicissimus, aka Adventures of a Simpleton. My 8x-great-grandfather, Christian Brandstetter is said to have been a good friend of Grimmelshausen, serving with him during the war and was possibly related to him.

NOTE: I believe someone in the Facebook group Baden-Württemberg Genealogy has answered the following question.

Next, I have a note in the church death record book for Ulm, Ortenaukreis, Baden, Germany. This was found on LDS microfilm roll 0996363, section 1, page 240. 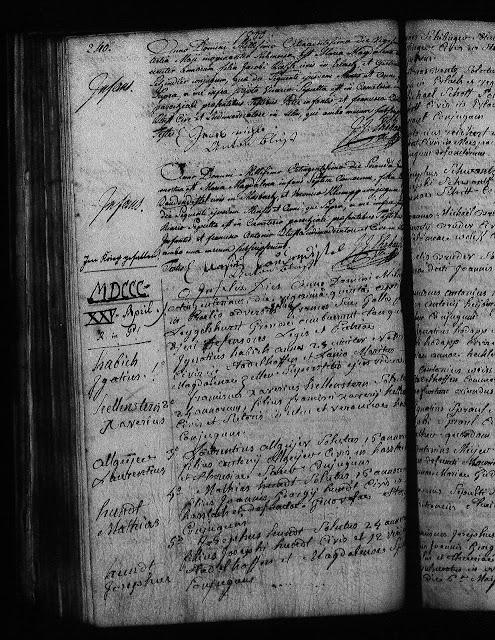 It's not clear what exactly it signifies. I'm confident it signifies something important to the people of the area. It is a note that appears to read "Der König gefallen". This translates to, essentially, "The King has fallen" and typically means he has fallen in battle. I can't see where else on the page would be talking about this. Can anyone else see something on this page this refers to?

Looking at the rulers of Baden, I don't see one that died around this time frame. Reading https://en.wikipedia.org/wiki/History_of_Baden-W%C3%BCrttemberg, it notes that there was a political reordering of the southwest around 1800. Is this what it's talking about? I'd be interested in your input.

The person in the Baden-Württemberg Genealogy Facebook group noted that this does not read "Der König gefallen". Instead, she pointed out that it reads "Im Kreig gefallen". This means that the individual listed, Ignatius Habich, fell in war. The entry says that this occurred in or near Leggelshurst.