I was stumped. How in the world could I possibly find information about my Miller line? Here is everything I knew about them, taken from Sister Catherine Seemann's book "The Bixenman Family and Allied Families - Volume 1" - Page 285:


The Millers original name was Mueller with two dots over the u, as they were Germans from Germany. Mary Ann Seemann McNamara gave the picture of the Mueller family, with the brothers and sisters of Charles, for inclusion in this book. Cecelia Baldwin also sent one so several families must have it. Anna Miller Seemann named the group but did not remember the name of one brother. They are listed here as they were on the back of the picture: 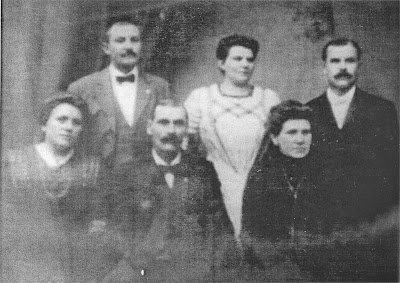 These Millers (from now on the name will be used in the Americanized form) lived in New York City. Not too much is remembered of these people. What we do know is from Mary Anne Seemann McNamara, a great-grand-daughter, who tells the remembrances of her mother Ann Miller Seemann. She writes:

"Mom said they (the Millers) opened a dry cleaning establishment in New York using wash tubs and hanging clothes outside. Aunt Sophie Schmalzl was involved. I went to New York in 1949 or 1950 and went to Mount Vernon and met her. Aunt Crescence was looking after her there. She was 91 or 92 years then. She lived in the house with a daughter Kay who was badly crippled with arthritis. Kay had a son who picked me up at the train station. I lost the address book which had names and addresses in it."

My search started with trying to find descendants of Gottlieb Müller. I found Gottlieb's death record at: https://familysearch.org/ark:/61903/1:1:2WL7-DWG

This listed his parents as Gottlieb Müller and Anna Marie Liebrich. I had found this record previously but disregarded it because it listed his spouse as Selma Muller. I knew that Gottlieb's wife's name was Rebeca so I thought this couldn't be him, even though it listed his occupation as Dyer and Cleaner. This had me confused.

I decided to track Gottlieb in every US Census I could.

Finally in the 1930 US census, it appears that Rebeca had passed away and Gottlieb remarried. It lists him with wife Selma and son Harold, 25 years old. It lists Harold as a subway engineer.

Here is Gottlieb with his wife Selma. This is the Gottlieb whose death record I found above. Gottlieb's son Harold is the key. Harold's entry, at an age that lines up with the other census records, living with his father and step-mother in the 1930 census connects our Gottlieb Müller to his wife Selma and therefore to this death record that lists Gottlieb's parents as Gottlieb Müller and Anna Marie Liebrich. Yes, I believe his father's name is listed incorrectly here but enough of it lines up that it makes it reasonable. When other items of interest line up with what we find here, it starts to become convincing. Gottlieb's Find-A-Grave memorial can be found here.

I believe that Anna's marriage record has the correct name for their father, Christian. Why do I believe this record is correct and Gottlieb's death record is not? When Gottlieb died, someone who didn't know Gottlieb's father likely gave the information to the recorder. Whereas, when Anna was married, it's quite likely that Anna gave this information and Anna has first-hand knowledge of her father's name.

I hadn't found any information about "Rika" Müller Susenberger, who I understood was one of the Müller siblings. I found a marriage record for a Dorothea Kurz to a John Gusenburger. It shows that Dorothea was a widow and her parents' names were Christian Müller and Marie Liebrick. It also lists Dorothea's birth location as Nierdingus, Germany. Is is possible that Rika is actually Dorothea?
https://familysearch.org/ark:/61903/1:1:2443-XMN?from=lynx1

I did a search for a marriage of Dorothea Müller to a man whose last name was Kurz and found Dorothea Fredericka Müller Kurz, wife of Christian Kurz, mother of Charles Otto Kurz.
https://familysearch.org/ark:/61903/1:1:FDRF-NX9

I found the death record for Christian Kurz, also a dyer, in Manhattan on December 17, 1896. This is all lining up perfectly. While I didn't have any information about Fredericka being a widow or that her husband was involved in dying or cleaning, the fact that he does lines up well with the rest of the extended family.
https://familysearch.org/ark:/61903/1:1:2W65-CQP

Dorothea's marriage record lists her birthplace as Nierdingus. Anna's marriage record lists her birthplace as Nuertingen. These sound pretty similar. Nürtingen is a town with a population of just under 40,000, just south of Stuttgart, Baden-Wurtemburg in the district of Esslingen. Here is the village on Google Maps. Here is the Wikipedia page about the town.

Christian Kurz, the children of Fredricka and Christian Kurz, along with John Gusenberger and...wait for it...Fredericka Gusenburger are found on Find-A-Grave here. This is the first headstone of a Müller relation that are descendants of a Müller other than Charles that I've found.

The search isn't over. We still have Gusenberger and Schmalzl relations to track down, along with the other Müller brother.

1. Never give up. No matter how hopeless it seems, you could still find the information you need to break through a brick wall. I was looking for Müllers in New York City and Germany. Do you believe I honestly expected to ever break through this brick wall?

3. If you can't find anything, look for documentation about every possible life event for every one of your brick wall's relations. In this case, the US Census entries, marriage and death records of my great-grandfather's brothers and sisters allowed me to find their descendants, burial locations and even parents' names and home village in Germany.

Where are my dancing shoes? Time for the Genealogical Happy Dance!

Addendum:
It's really time to dance! The person that volunteered to look in the Nürtingen church books found the family! I'm quite confident of this. He found Carl Christian Müller, born October 7, 1852 to Johan Christian Müller and Anna Maria (or Maria Margaretha) Liebrich, along with Dorothea Fredericka, born August 2, 1861 to the same parents and a family register with the entire family including Gottlieb, Sophia, and Anna Maria. It's still unknown what the name of the other brother in the photograph is. There is only one other brother in the family but I can't make out his name. Here is the family register. Let me know what you think! 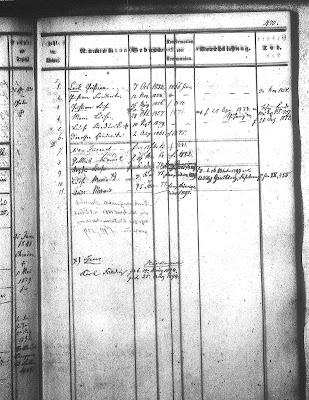 In addition, this person that found this for me discovered that he already had this family in his database because he is related also. He is my seventh cousin!