X-DNA Inheritance and What It Tells You

I felt I wasn't getting a lot of genealogical value from my DNA test. I was speaking with a distant cousin of mine and she reminded me to take a look at my xDNA matches. Taking a closer look at this does tell me quite a bit more about my matches and could help narrow down how some are related to me.

What is xDNA? xDNA is the other half of the chromosome pair that includes the yDNA that males receive from their father. Mothers always pass along half of their xDNA to all of their offspring. If their child is male, all of his xDNA came from his mother and all of his yDNA came from his father. If their child is female, the daughter will receive half of her xDNA from their mother and the other half from her father.

So how can this information help you know more about your DNA matches? If a male finds a match who is also an xDNA match, it means that this match MUST be related on his mother's side. This is the case because the male only receives his xDNA from his mother. After the first generation, it gets a bit trickier. This is because, unlike mtDNA, which is inherited strictly down female lines, a father does pass along a portion of their xDNA, but only to his daughters. These daughters then pass along their xDNA to their children so a piece of the father's xDNA is passed along to descendant generations through their daughters. 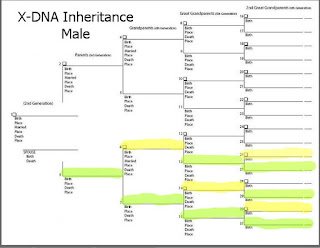 In the chart above, you can see that a male receives xDNA only from his mother, while his mother received xDNA from both of her parents. This pattern repeats through each generation. 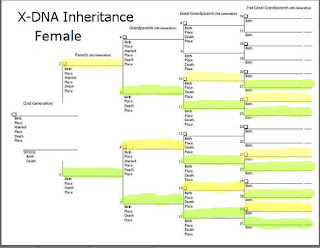 In this chart, you can see a female receives xDNA from both of her parents, while her father received xDNA only from his mother.

If you have an xDNA match, you can be sure they are descended from one of the colored lines shown in these charts, or further back, of course. In my case, one relation, that I had assumed was related on my father's Irish lines, is proven to be related on my mother's side, which is entirely German. It helps shed light on where I should look for possible connections to this match.

There are a couple of things to keep in mind regarding xDNA. First, do not get it confused with mtDNA or mitochondrial DNA. mtDNA is passed strictly from mother to child and male children will never pass any part of their mtDNA to their children. If you match someone's mtDNA, you must be descended from the same mother's mother's mother's (etc) line, with no fathers involved in the mtDNA match. Second, even if you are an xDNA match with someone, you could still be related to them on your father's side, making you double cousins. Yes, this is more rare, but it does happen.

Take a closer look at your xDNA matches. It could keep you from wasting time looking for matches on lines where they couldn't exist.