I hoped to find a large amount of information about the Hugh Kelly family, which is the only family of mine that actually lived in Warsaw but I found just a few mentions of him. What I found more of is news about that darn Doran family in neighboring Carthage. As is typical, you don't find much in the newspapers about modest, law-abiding people but you find much more about the trouble-makers.


Also as is typical, searching the text of newspapers is haphazard at best. I'm confident there are more stories about my families in these pages but OCR, especially for old text scanned from discolored, faded and torn newspapers can be pretty bad. I'll have to start browsing certain dates and later just page by page to see if I can find more. Still I did find some. Here's what I found.

First is a notice posted by the City Council of Warsaw notifying property owners, including Hugh Kelly about a meeting regarding widening the street bordering their property.

Next up are notes from a City Council meeting noting that a petition by Frank Schrie and Hugh Kelly regarding opening a street had been referred to the appropriate committee. 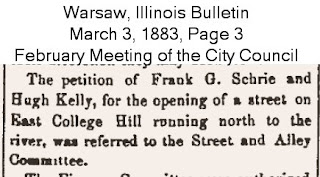 Next we have the obituary of Michael Dee, son of Catherine Murphy Kelly. 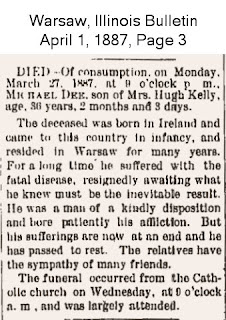 Here is a note about a children's party, hosted by "Mr. & Mrs. Kelly" for their granddaughter Katie Doran. This is likely Kathryn Doran, the daughter of my great-grandparents Tom Doran and Mary Ann Kelly. Mary Ann's parents were Hugh Kelly and Catherine Murphy Kelly. The age looks right but it wouldn't have been a birthday party for her since I have her birth date down as November 13, 1882. 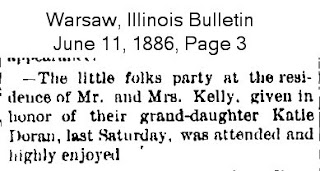 Finally we have the obituary for Hugh Kelly. 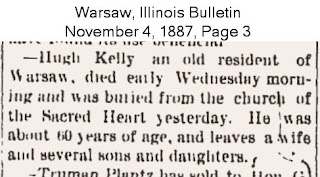 Then we move on to those darn Dorans. Previously, the newspaper article about the death of Henry Doran said "The Doran family, living beyond the Wabash depot, was often in trouble and history tells that 'Granny' Doran had an establishment in her home." It was never clear to me what kind of establishment they were talking about but I speculated she served alcohol. It turns out I was right. The first notice talks about Mr. Doran being the proprietor of the illegal drinking establishment and that he served time in jail for the offense. 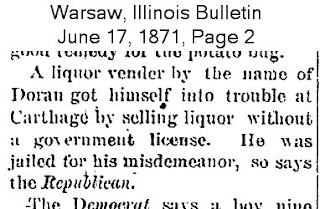 Then an article about Granny Doran, apparently this is not the first time she has been caught and not punished for selling alcohol. 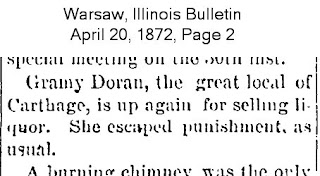 Next up is the death announcement of "Old Tommy" Doran. In the announcement, he's called "Old Uncle Tommy Doran". This is the first time I've seen that name for him. 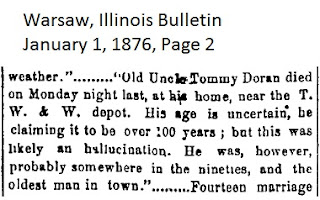 This announcement being on Saturday, January 1, 1876 saying he died "Monday night last" puts his death date as Monday, December 27, 1875. I love how it says he claimed to be over 100 years old but it was likely an hallucination. At this point, we believe he was born around 1800 to 1803, which would have put him at no more than 75 years old. Given the descriptions of his family being known to cause trouble and reading about some of these adventures, I'm thinking stress and hard living probably aged him prematurely.

Next is the biggest find in this dive into these newspapers. It's the death notice for Catherine "Kitty" "Granny" Doran. Previously I believed that she had died shortly after the death of her husband in early 1876 due to her being noted as deceased in his some of his probate papers, but I couldn't be sure. Now we can figure out the date of her death. 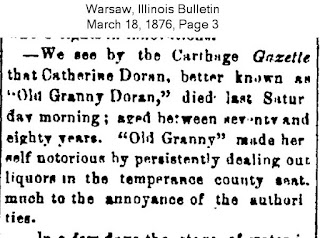 Given that the newspaper came out on March 18, 1876, which was a Saturday and it's noted that she died "last Saturday morning", means she died the morning of March 11, 1876. I like how her death announcement notes how her selling of liquor annoyed the authorities. She must have been quite the character.

Finally is a sad note about Tom and Kitty's daughter, my great-great-grandmother, Nancy Doran Dunnigan.

It's not clear if she was paid that amount to house a pauper or if she was the pauper and received the money as charity to pay rent.

I can't wait to see what else I can find. If you have ancestors in Hancock County, Illinois, definitely dig in to these newspapers and see what you can find. I'll post more if I find anything particularly interesting.