In my previous post, I talked about the new tool, Autoclusting by Genetic-Affairs. I still believe this is the most powerful tool that's come out to help in analyzing your DNA results in long time. This makes it so much easier to see the in-common matches and figure out how they all might be connected. That first post was after I had generated my initial autoclusters but before I really looked into the results. My initial thought was that I inherited some DNA from an endogomous population that my paternal first cousin did not. Discussing it in various DNA discussion groups on Facebook, the question came up of a potential NPE ("non-paternal event" or "not parent expected"). If this was going to be the case, it would have had to have been an affair that would have come as a shock to many family members so I wanted to be 100% certain before speaking of it to anyone.


Here is a screenshot of the autocluster that surprised me: 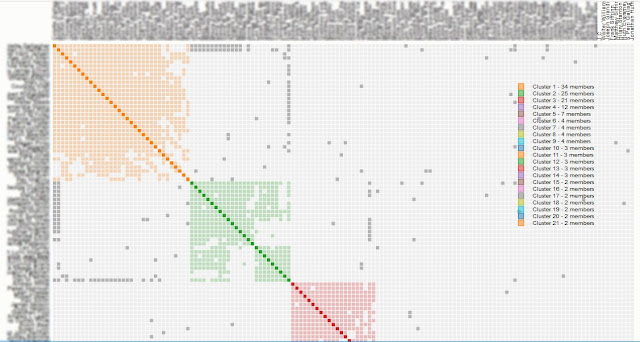 I've blurred out the names of the matches. You can see the large autocluster group one in orange and the fact that with group two in green added, it appears to make a larger, more nebulous group. If I have this many in-common matches from descendants of an endogomous population, it would have made sense for my first cousin on the side of the family this large group is from should share similar matches. She does not. This is why people on Facebook DNA groups suggested looking for in-common matches that I can determine came from each of my two grandparents on that side of the family. The suggestion was that possibly one of my grandfather's children may not have actually been his.

The good news is that I found in-common matches between me and my first cousin on both my grandfather's side and my grandmother's side. I was still confused so I decided to map out the shared chromosomes for this mass of in-common matches.

Here is a screenshot of part of chromosome 6 from the chromosome browser populated with members of group 1 in orange above: 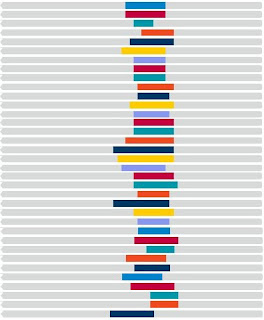 Here is a screenshot of part of chromosome 14 from the chromosome browser populated with members of group 2 in green above: 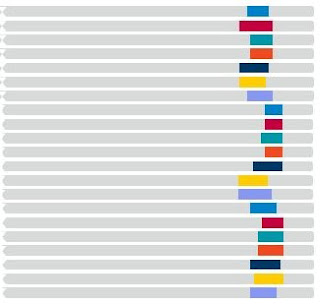 In both of these screenshots, you can see small segments in common with all of the members of each of the autocluster groups. This signifies that the members of each group descended from the same ancestral couple, respectively. If this was the result of inheriting genes from an endogomous group, the shared DNA segments would have been scattered around my genes. If the shared segments were scattered around my genes and my first cousin did not share any, then it would call into question which grandparent was from the endogomous group, which would also have been the grandparent that my first cousin did not share. As it stands, however, the shared segments were small and distinct. This indicates that I just happened to inherit a small segment of DNA that my first cousin did not and this segment came from an ancestor that had a large number of descendants.

In addition a couple members of each group shared matches in common with the other group. They appear on both of these chromosome maps. It means that they are descended from both of these lines and are likely related a bit more closely to me.

Now the trick is figuring out who we are all descended from. I have my theories as to which of my ancestors this is. I don't know his name. If I'm correct, this is the DNA I inherited from the father of my great-grandfather, Thomas Doran. I have ordered a DNA test for another descendant of Thomas Doran and Mary Ann Kelly. If I'm right, she will also appear in these autocluster groups.

Posted by Matthew Miller at 8:47 AM