I love old newspapers! I found a couple of newspaper articles that give us more detail and a differing story about the fight between Tom Doran and Jim Deaton in Junction, Texas and about Tom Doran's death. Keep in mind that this Tom Doran is not my direct ancestor. He was the brother of my great-great-grandmother, Nancy Doran Dunnigan. They were born in Ireland but spent much of their lives in Carthage, Hancock County, Illinois. You can see the initial discovery about this story here: http://matthewkmiller.blogspot.com/2014/10/share-your-info-and-ask-questions.html

It seems that Tom and Jim (Joseph in one of the articles) were friends out drinking and gambling. Also, according to the newspaper article, the throat slashing and Doran
shooting Deaton happened on the same night. In the second article, it says that Louis Temple was killed in the shootout with Doran and that Temple's father is the one that killed Tom Doran. In addition, it says that Doran killed another man in Fort Clark, Texas some time earlier.

This sure puts the whole story in a different perspective! Here are the newpaper articles and my transcription of them. I left spellings exactly as they were in the original article, to the best of my ability. 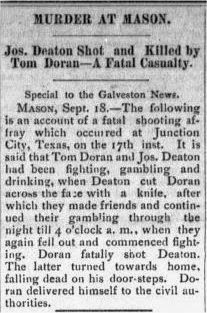 Mason, Sept. 18.--The following is an account of a fatal shooting affray which occurred at Junction City, Texas, on the 17th inst. It is said that Tom Doran and Jos. Deaton had been fighting, gambling and drinking, when Deaton cut Doran across the face with a knife, after which they made friends and continued their gambling through the night till 4 o'clock a.m., when they again fell out and commenced fighting. Doran fatally shot Deaton. The latter turned towards home, falling dead on his door-steps. Doran delivered himself to the civil authorities. 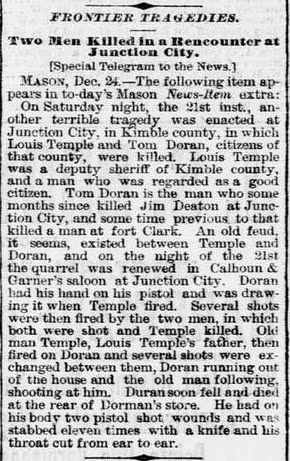 Mason, Dec. 25.-- The following item appears in to-day's Mason News-Item extra:
On Saturday night, the 21st inst., another terrible tragedy was enacted at Junction City, in Kimble county, in which Louis Temple and Tom Doran, citizens of that county, were killed. Louis Temple was a deputy sheriff of Kimble county, and a man who was regarded as a good citizen. Tom Doran is the man who some months since killed Jim Deaton at Junction City, and some time previous to that killed a man at fort Clark. An old feud, it seems, existed between Temple and Doran, and on the night of the 21st the quarrel was renewed in Calhoun & Garner's saloon at Junction City. Doran had his hand on his pistol and was drawing it when Temple fired. Several shots were then fired by the two men, in which both were shot and Temple killed. Old man Temple, Louis Temple's father, then fired on Doran and several shots were exchanged between them, Doran running out of the house and the old man following, shooting at him. Duran soon fell and died at the rear of Dorman's store. He had on his body two pistol wounds and was stabbed eleven times with a knife and his throat cut from ear to ear.
-----------------
So, which version of the stories are correct? The story that was published in "It Occurred in Kimble", published in 1937, or the stories published in the newspapers in the days following the incidents?

This Tom Doran isn't my direct ancestor but I find the story fascinating. As I find more details, I'll keep you posted. If you know anything more about this story, please post a message or drop me an email!