The Passing of My Mother, Agnes Catherine Panther Miller

This past Saturday, at 12:20pm, while I held her hand and family gathered around, my mother passed away. She knew she was near the end and told everyone she could that she loved them. When the doctors detected a problem with her heart, they sent her to Lincoln to see a cardiologist. When she found out the news and she returned to Brookestone center in Columbus, Nebraska, she told the nurses who greeted her that she was back, but that she hoped it would be a short stay. Less than 24 hours later, she left us. She was a cheerful, fun, helpful and outgoing lady. Everyone that met her commented about what a neat lady she was. Her funeral services are scheduled for this Saturday, February 18. I expect the church to be filled with people who loved her to pay their final respects. Who was my mother? Let me tell you....

Agnes Catherine Panther was born in a farm house near the intersection of highway 218 and the old highway 103 near West Point and Donnellson, Lee County Iowa on April 29, 1931. Her parents were Benedict Panther and Elizabeth Menke Panther. Her brothers and sisters she joined were Urban, nearly 14 years old, Albert, 12 years old, Eugene, almost 10 years old, Mary, 7 years old, Loretta, 5 years old, and Rita 3 years old. Her parents had lost the youngest, Robert Joseph one year before at just a few months of age. Later, the family greeted her younger sisters, Martha, born in 1936 and Carolyn, born in 1940.

She attended school at Houghton. In the early years, I believe she walked much of the time but she did get car rides occasionally.


She must have been a handful while in school. Here is a note written to her by her teacher when she graduated: 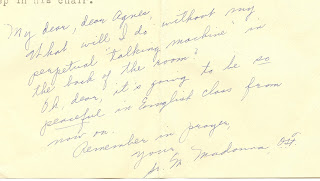 In the early 1950s, she worked as a phlebotomist at the hospital in Fort Madison, Iowa. She worked with a friend, Cecelia Miller. One day, a young man came in to say "Hi" to his sister Cecelia. Agnes saw him and tried wrangling him in order to draw his blood. He responded that he was just there to visit his sister but she was pretty insistent. She wasn't successful in drawing his blood but this is how she met John Anthony Miller.

Agnes and John married in Houghton, Iowa on August 1, 1953.
After giving birth to their first child in Fort Madison, Lee County, Iowa, they moved to David City, Nebraska and within a couple of years to Columbus, Platte County, Nebraska where they raised their family and lived out the rest of their lives.
She lived in Columbus for nearly 60 years and worked at Dale Electronics until retirement. She enjoyed playing cards and was an avid Husker sports fan, to the dismay of her family remaining in Iowa. She was a member of St. Bonaventure Church, past president of the St. Bonaventure Guild, Catholic Daughters, former director of the Liturgical Singers, taught CCD, was a member of the Mixed Choir and Funeral Choir. She also served as past president and life member of the Williams PTA and past president of the PTA Council of Columbus. 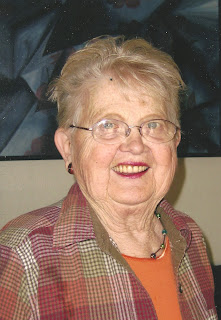 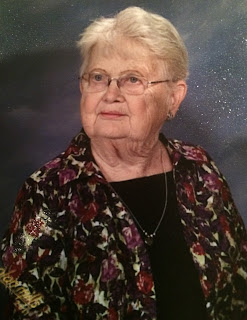 She didn't stop helping others until her body finally started giving out in the last couple of years. She read to the "old people" at local retirement homes. The funny thing is that she was older than many of those in the homes. One of the favorite compliments that was paid to her, and she told the story again the day before she passed. was that she was leaving a retirement home after reading to the residents, one of the residents said to her, "We just love it when you come read to us. We sleep so well." Mom laughed, then said, "She meant it as a compliment and I took it as a compliment."

Things I've heard people say about Mom: "She's beautiful!", "She's so much fun!", "She's a sweetheart!", "I love her!" So, the fact that she was my mother isn't the only reason I loved her.

Addendum:
While it wasn't standing room only, there were a lot of people at the funeral. It was presided over by six (6) Catholic priests! The priest my mother had requested made a comment regarding the number of people attending, the number of prayers said on behalf of my mom and the number of priests at the service that, if she isn't in heaven, none of us will get there.

The best compliment I heard was from my aunt, the wife of my mother's brother. She said, "The one thing I admired most about Agnes is that she was Agnes. No matter what anyone else thought, she was going to be who she was. If someone didn't like it, that's their tough luck."

Posted by Matthew Miller at 8:48 AM