There are three Tom Dorans in my family tree. This is the story of my great-grandfather.

Nancy Doran had come to America from Ireland some time in the previous ten years but did not arrive with the rest of her family. In 1850 she was living with her parents, brothers and sisters in Havorford Township, Delaware County, Pennsylvania, just outside of Philadelphia. Her occupation was listed as weaver. Nancy was an unwed mother when Tom was born somewhere between 1853 and 1859, likely in Brooklyn, New York.
In 1860, Tom was living with his mother along with her brothers, sisters and parents, in Carthage, Hancock County, Illinois. On August 11, 1860, his mother married Martin Melvin in Carthage. In 1862, they divorced. On September 20, 1863, she married Patrick Dunnigan.


Tom had a baby sister born in about 1865. Her name was Beatrice or Bridget Plunkett. In 1868, his uncle was killed in a brawl with another uncle. In 1870, he is found living with his mother, stepfather and sister in Carthage. At the end of 1876 to the beginning of 1877, his grandfather Tom Doran and his grandmother Kitty Doran died. In 1878, his mother gave him the old family home, technically selling it to him for one dollar. Also in 1878, his Uncle Tom Doran killed a man in Junction, Texas, was declared innocent, then was killed by a sheriff's deputy three months later.


Some time by 1880, he married Mary Ann Kelly. In 1880, he is working as a section boss for the railroad, living in Calumet Township, Pike County, Missouri with his wife and mother. Even though he was living across the river in Missouri, he still owned the family home. It appears that during the years of 1880 through 1897, he moved around small towns around the Lee County, Iowa, Hancock County, Illinois and Pike County, Missouri. I believe this was due to different assignments working for the Santa Fe Railroad. 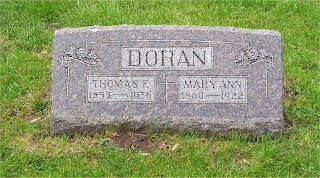 He was buried in Sacred Heart Cemetery in Fort Madison.
Posted by Matthew Miller at 8:56 PM