Not long before finishing my ancestry research in the area around Ortenaukreis, Baden, Germany, I exchanged emails with a person who lived in the area. I provided a family tree to him and he commented that without doubt, my 8x-great-grandfather knew Hans Jakob Christoffel von Grimmelshausen. At that time, I know I recognized the name Grimmelshausen and I know I saw the death record for Grimmelshausen in my research, but since I didn't have a family connection to him, I hadn't looked too hard at it. Once I received this email, however, I started looking deeper into who Grimmelshausen was.

Much to my surprise, it ends up that my 8x-great-grandfather, Christman Brandstetter, was good friends with Grimmelshausen, served with him during the Thirty Years War, settled in the same village as him after the war and is mentioned, fictionally, in some of his works, including a perpetual calendar Grimmelshausen created. After they settled in Renchen, Ortenaukreis, Baden, the two men continued their friendship as Grimmelshausen began his literary career and Brandstetter ran a "Schnekenhausen", which can be translated as either a worm farm or a snail farm.

I did a search and found a pdf of what is essentially a newsletter for Renchen from the early 1900s. This newsletter included this article by Arthur Bechtold: 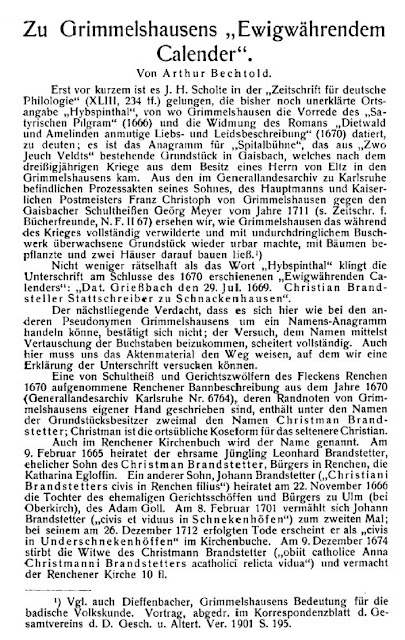 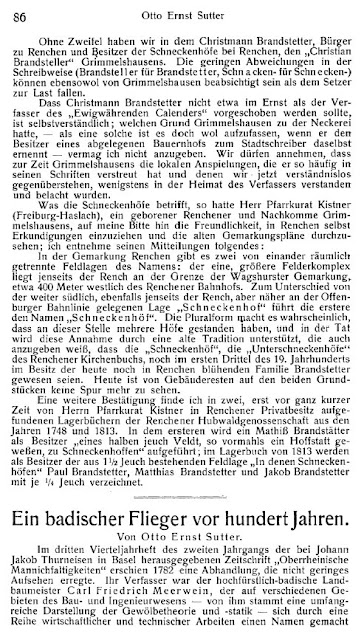 When I first found this document, I did my best to translate it myself as I read, plugging individual words into Google Translate when needed. I was confused because it appeared that sometimes it referred to Christman Brandstetter as a worm (or snail) farmer and sometimes as a town clerk in the town Schneckenhausen, which, translated, means worm (or snail) farm. I sent this through an OCR (optical character recognition) system, then did an automatic Google translation of the whole document and it's clear that the author, in 1912, was describing how Grimmelshausen fictionalized his friend into his stories. It's crazy that something you can have in your possession for a long time can lead to new insights. Be sure to review old documents you have to be sure you fully understand what they're saying!
Here is an automatic translation by Google Translate:

Only recently did JH Scholte succeed in the "Zeitschrift für deutsche Philologie" (XL1II, 234 ff.), The as yet unexplained location specification "Hybspinthal", from where Grimmelshausen used the preface to the "Satyrischen Pilgram" (1666) and the dedication of the novel "Dietwald and Amelinden graceful description of love and suffering" (1670) dated to interpret; it is the anagram for "Spitalbühne", the property in Gaisbach consisting of "Zwo Jeuch Veldts", which came from the possession of a Herr von Eliz in Grimmelshausen after the Thirty Years' War. From the trial files of his son, the captain and imperial postmaster Franz Christoph von Grimmelshausen against the Gaisbacher mayor Geörg Meyer from 1711 (see Zeitschr. F. Book friends, NF 11 67) we can see how Grimmelshausen did this Land that was completely overgrown during the war and overgrown with impenetrable bushes made arable again, planted with trees and had two houses built on it)) No less puzzling than the word "Hybspinthal" sounds the signature at the end of the 1670 "Eternal Calenders ":" Dat. Grießbach, Jul. 29, 1669. Christian Brandsteller city clerk Schnackenhausen". The most obvious suspicion that this, like the other pseudonyms of Grimmelshausen, could be a name anagram, is not confirmed; the attempt to use the name To get around by interchanging the letters fails completely. Here, too, the files must show us the way in which we can try to explain the signature. A Renchen ban description recorded by the mayor and court wolves of Renchen in 1670 from the year 1670 <Generallandesarchiv Karlsruhe No. 6764), the marginal notes of which are written by Grimmelshausen's own hand, contains the name Christman Brand twice under the names of the property owners. Stetter; Christman is the local pet form for the less common Christian. The name is also mentioned in the Renchen church book February 1665 married the honorable youth Leonhard Brandstetter, legitimate son of Christman Brandstetter, citizen of Renchen, Katharina Egloffin. Another son, Johann Brandstetter ("Christiani brothers civis in Renchen filius") married the daughter of Adam Goll, the former bailiff and citizen of Ulm (near Oberkirch), on November 22, 1666. On February 8, 1701, she married Johann Brandstetter ("civis et viduus in Sehn e ken 116 f en") for the second time; when he died on December 26, 1712, he appears in the church book as "civis in Under schnekenhöffen". On December 9, 1674, the widow of Christmann Brandstetter dies ("obiit catholice Anna Christmanni Brandstetters acatholici reiicta vidua") and bequeathed 10 florins to the Renchen church.

Without a doubt, we have in Christmann Brandstetter, a citizen of Renchen and owner of the Schneckenhöfe (worm farm or snail farm) at Renchen, the "Christian Brandsteller" of Grimmelshausen. The slight deviations in the spelling (Brandsteller for Brandstetter, Schnacken- for Schnecken-) can just as easily be of Grimmelshausen. It goes without saying that Christmann Brandstetter should not be seriously accused of being the author of the "Eternal Calendar"; what reason Grimmelshausen had for the teasing - it is surely to be understood as such when he appoints the owner of a remote farm as town clerk there - I cannot say. We can assume that at the time of Grimmelshausen the local allusions which he so frequently scattered in his writings and which we now confront without understanding, were at least understood and laughed at in the author's homeland. As far as the Schneckenhöfe are concerned, Mr. Pfarrkurat Kistner (Freiburg-Haslach), a born Renchener and a descendant of Grimmelshausen, was kind enough to inquire about Renchen himself and to look through the old Gernarkungsplanes; I take the following from his communications: In the Renchen district there are two spatially separated field locations of the name: the one, larger field complex lies on the other side of the Rench on the border of the Wagshurst district, about 400 meters west of the Renchen train station. In contrast to the "Schneckenhof" location further south, also on the other side of the Rench, but closer to the Offenburger railway line, the former is called "Schneckenhöf". The plural form makes it probable that there were several courtyards at this point, and in fact this assumption is supported by an old tradition which also knows how to state that the "Schneckenhöf", the "Unterneckenhöfe" of the Renchen church book, are still in the first Third of the 19 Century were owned by the Brandstetter family, which is still flourishing in Renchen. Today there is no trace of building remains on the two properties. I find further confirmation in two warehouse books of the Renchen Hubwaldgenossenschaft from the years 1748 and 1813 that were only recently discovered by Parish Curate Kistner in Renchener's private collection. In the first one, Mathiss Brandstätter becomes the owner of “half a Jeuch Veldt, so in the camp book of 1813, Paul Brandstetter, Matthias Brandstetter and Jakob Brandstetter each recorded 1/4 Jeuch as the owners of the field site consisting of 11/2 Jeuch "In those Schneckenhof".

Indeed, my 8x-great-grandfather, Christman Brandstetter was friends with Grimmelshausen. I'd love to find a copy of the perpetual calendar that features him! Note that in the above article the names Leonhard Brandstetter and Katharina Egloffin are mentioned. They are my 7x-great-grandparents.

Posted by Matthew Miller at 9:50 AM