After learning about my grandfather's first cousin, Christian Müller, being sent to Nebraska on board an "orphan train" of the Children's Aid Society in 1902, I've been trying to learn more about it. I have so far found just one article in the "Red Cloud Chief" newspaper of Red Cloud, Nebraska. I found the articles below on the University of Nebraska website "Nebraska Newspapers". Here is the article found in the Friday, September 12, 1902 issue of this newspaper: 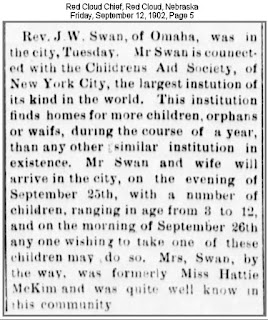 Rev. J. W. Swan, of Omaha, was in the city, Tuesday. Mr. Swan is connected with the Childrens Aid Society, of New York City, the largest institution of its kind in the world. This institution finds homes for more children, orphans or waifs, during the course of a year, than any other similar institution in existence. Mr. Swan and wife will arrive in the city, on the evening of September 25th, with a number of children, ranging in age from 3 to 12, and on the morning of September 26 any one wishing to take some of these children away my do so. Mrs. Swan, by the way, was formerly Miss Hattie McKim and was quite well know(n) in this community.

This was the day that Christian Müller arrived in Red Cloud and was taken home by Dr. Wells and began going by the name George Wells. It's not much more detail but I'm happy to receive any additional information I can.

While performing the search that resulted in this article, I found one additional article. It is a joke about orphans. It shows how much our sense of humor has changed over the past 100+ years. It is a bit funny but also sad. 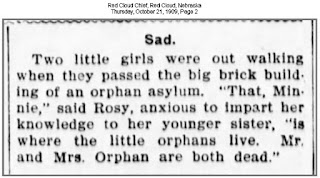 Two little girls were out walking when they passed by the big brick building of an orphan asylum. "That, Minnie," said Rosy, anxious to impart her knowledge to her younger sister, "is where the little orphans live. Mr. and Mrs. Orphan are both dead."