In this post from August 2019, I talked about the transcription of the marriage record I found for my 2x-great-grandparents, Andreas Dunzinger and Anna Ziegelmuller. A few months later, I was able to obtain an image of the church book record. You can see that the transcription was an accurate representation of what was written in the record. It lists Anna's surname as Ziegelmilch and her parents as Paul Ziegelmilch and Victoria Seefried. 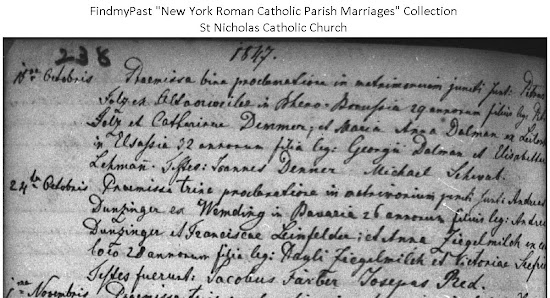 This lines up with the parents listed in the Leonard Ziegelmuller's marriage record in Wemding, Bavaria, also discussed in the above blog post.

Given that the records for Wemding are not available online or on microfilm, I couldn't research any further. Then, I received a notification from MyHeritage about a new "Person Discovery" listing several members of the Dunzinger and Ziegelmuller families. I looked at what they provided and was astounded. Another MyHeritage user had listed parents for Paul Ziegelmuller and an amazing six generations of ancestors for Victoria Seefried.

You can never take what is posted in undocumented family trees you find that others have posted online as fact. There is nothing to prove these names and dates. Still, this is information I never had before. I added these ancestors to my database with "(Speculative)" as the first part of their first name. I never want to forget that these people are not proven to be my ancestors.

I then took the earliest ancestor's name and birth year and did a web search. I found another page listing a few more generations of ancestors. If I was able to prove this information, that would take this ancestral line eight generations further back than any other branch of my family tree. This includes two of my 16x-great-grandparents, born around the year 1310.

I'd like to believe I've found a new large branch of my family tree. Unfortunately, all I've found is a clue. Now I need to find a way to document this information. I've sent messages to the people who posted this family line on MyHeritage and FamilySearch a couple of days ago. Hopefully one or both of them will respond with more information. If you are reading this and have information about this family line, I'd be thrilled to talk to you about it.

Here is the list of Anna Ziegelmuller's ancestors that I hope to document in the near future. Anna was my great-great-grandmother.

1. Anna Ziegelmüller, daughter of Paul Ziegelmüller and Maria Victoria Seefried, was born in 1829 in Germany and died about 1856 about age 27.

4. Caspari Ziegelmüller was born about 1760.

6. Franz Joseph Seefried, son of Johann Paul Seefried and Maria Anna Schaeffer, was born about 1756 and died about 1820 about age 64.

7. Maria Theresia Jaumann, daughter of Johann Georg Jaumann and Anna Elizabetha Menhorn, was born about 1754 and died about 1809 about age 55.

12. Johann Paul Seefried, son of Ferdinand Seefried and Catharina Fackler, was born about 1721 and died about 1760 about age 39.

13. Maria Anna Schaeffer, daughter of Franz Joseph Schaeffer and Anna Sibylla Heckel, was born about 1723 and died about 1762 about age 39.

24. Ferdinand Seefried, son of Michael Seefried and Apollonia Reicherzer, was born about 1684 and died about 1738 about age 54.

27. Anna Sibylla Heckel, daughter of Leonard Heckel and Margarethe, was born about 1695.

49. Apollonia Reicherzer, daughter of Johann Reicherzer and Margaretha, was born about 1644 and died about 1724 about age 80.

54. Leonard Heckel, son of Johann Heckel and Katharina Boehle, was born about 1658.

The name of Johann's wife is unknown.

The name of Simon's wife is unknown.

The name of Melchoir's wife is unknown.

Posted by Matthew Miller at 9:17 PM